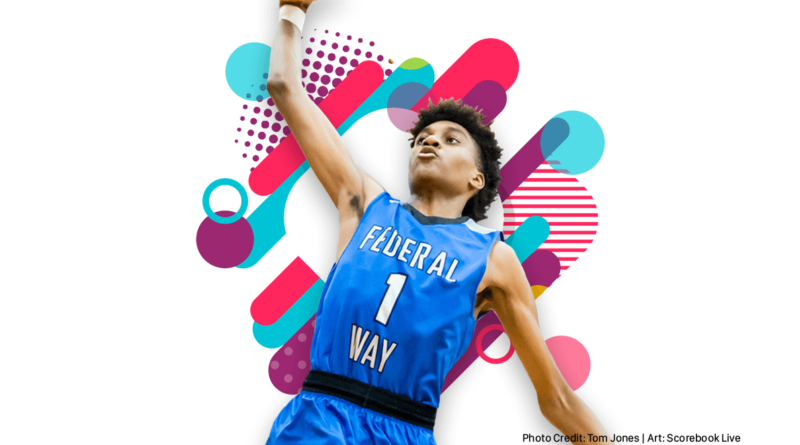 The Cardinals have had a tremendous season so far with an undefeated 13-0 record. Last week they had a big win over SPSL foe Foss, making an undefeated season a realistic possibility.

The Stags have rolled to twelve straight wins, and legitimately could make a big leap in these rankings over the next couple of weeks if they can maintain their momentum. Head Coach Chad Hand joins Union’s Blake Conley as one of the leading candidates for coach of the year after putting on a masterclass in the first half of the season.

Senior guard Alex Schumacher and the Storm made it through a tough non-league schedule with high marks. We can’t knock them for a tough loss to West Linn at the Les Schwab Invitational, and they’ll have a chance at not only a top-10 ranking but also a GSHL championship if they can figure out how to stop Camas and red-hot Union. Head Coach Matt Gruhler might just be up to the challenge.

The Falcons have sputtered after a strong start to the year, dropping three of their last four games. We’ll say it again though, this team has as much talent as almost anyone in the state and Micah Pollard is the real deal, so we expect that the struggles won’t last for long.

Jacob Wells and the Greyhounds have been perfect so far with an 11-0 record. Pullman has been a handful for their opponents this season, and they might have the best chance at an undefeated season of anyone on this list.

The Papermakers find themselves neck-and-neck with Skyview, with both teams sitting at 10-3. Like the Storm, they’re also looking up at a formidable Union team at the top of the GSHL. They have the same opportunity as Skyview to make a jump in these rankings if they can put together a strong end to their league schedule.

The Tomahawks had a rough start to the season but have really come on as of late, winning eight in a row. Washington-bound Raequan Battle has been a big reason for their success, carrying Marysville-Pilchuck to a 6-0 league record. We won’t be surprised if they make some noise when it comes tournament time.

The Fighting Irish have felt the absence of Paolo Banchero with three straight losses. Despite their less-than-stellar record, we have them in the top-20 because they don’t have a single bad loss after a challenging first half of the season and they’ve been in almost every game despite injuries. John Christofilis, Paolo Banchero, and Noah Williams form one of the best cores in the state, and this team can be scary good when they are at their best.

The Wolverines have quietly gone about their business this season, but don’t overlook them. Head Coach Sam Fein and Bellevue don’t have many weaknesses and could be a sleeper pick for a state championship, but first, they have a KingCo title in their sights.

Despite a December slip-up against rival St. George’s, the Coyotes have been dominant again this season. Brock Ravet is capable of winning games on his own, but this 2018-19 edition also includes a strong supporting cast. Kittitas is the reason we wish there was an “open” division at the Hardwood Classic. The Coyotes deserve a shot at the big boys.

Kentridge is in pole position in the NPSL and are the favorite to stay there, despite a strong Kentwood team who has already accounted for one of the Chargers three losses. It will be one of the most intriguing leagues to keep an eye on as the end of the season approaches.

Led by Head Coach Jason Griffith, the Wildcats have rolled to a 10-2 record, with their only losses coming in an overtime thriller to Ferris and a close battle with Pinnacle (Phoenix, AZ). The real test will be holding off Bellevue for a KingCo title.

We’ll forgive you if you are just now realizing how good the Hilanders are. If any team has flown under the radar this season, it’s these guys. They have balanced a tough loss against a good Timberline team with an upset win over No. 12 Lincoln and a lopsided win over Battle Ground. Senior wing Shaw Anderson is averaging more than 23 points per game and has the Hilanders poised for a deep run come playoff time.

The Abes tout an impressive 9-2 record coming into Wednesday’s game against Wilson. Coach Ryan Rogers and Lincoln are led by all-world sophomore Julien Simon and have high aspirations come postseason time. Rounding into form now that league play has started, look for Lincoln to be a force to be reckoned with in the playoffs.

After a disappointing blowout loss to Gonzaga Prep, Mt. Spokane has rattled off eight straight victories to solidify the second spot in the GSL. Led by the dynamic duo of senior Jerry Twenge and sophomore Tyson Degenhart, the Wildcats have a chance to run the table and head into the playoffs with only one loss.

Losing 7’3’’ Riley Sorn would be an adjustment for any team, and it would have been reasonable to expect a drop off from last season, but the Bombers have kept the good times rolling in 2018-19. After a disappointing trip to Utah in December, Richland has won nine straight. This team is chalk full of seniors and their experience should give them a chance to make a deep playoff run.

With two tough early losses to league foes Puyallup and Olympia, the Vikings regained some momentum winning five of their last six, including an upset over California powerhouse Bishop Montgomery. That win alone should make everyone in the state a believer. Senior guard Zack Paulson and Curtis will be scary for any opponent who is unlucky enough to match up with them in the playoffs.

The Vikings are off to a great start this year winning 10 of their first 11 and look to keep that momentum going forward. Puyallup also got a midseason boost thanks to California transfer Kendall Munson, who makes this team truly formidable. Led by dynamic sophomore guard Cobi Campbell and the biggest front court in the state, Head Coach Scott Campbell’s Vikings have their sights set on an SPSL title and should challenge for a 4A state title as well.

Led by Michigan-bound Cole Bajema, the Lyncs are one of the most talented teams on this list, and they’re undefeated to boot. The only reason they find themselves out of the top-five is because they lacked the opportunities for big wins that the teams ahead of them enjoyed in the first half of the season. They’ll get that that opportunity this month against crosstown rival No. 4 Lynden. Like Kittitas, this team deserves a chance to play against the best, and it’s unfortunate we won’t get to find out how they match up.

Led by coach of the year frontrunner Blake Conley, Union may be the biggest surprise of the season, rattling off 14 straight victories. The Titans will now be tasked with holding off challenges from Camas and Skyview for a GSHL title, but for now at least, they look unstoppable.

Lynden was the favorite for a 2A title entering the year, and they’ve been so dominant in the first half of the season that we might need to figure out another adjective to describe them. With thirteen straight wins, including blowout wins over No. 19 Marysville-Pilchuk and No. 18 O’Dea, Head Coach Brian Roper and the Lions are simply head and shoulders above everyone else at the 2A level. The final regular season test will be a big one against No. 7 Lynden Christian, who is itching for a big win.

Another first half gone by, another top-five ranking for the Vikings. We don’t need to tell you how much talent they have on the roster (they have a lot), but Rainier Beach is again a favorite for the 3A state title. They should be tested this week as they go on the road to face a hot Garfield team.

Two nail-biter losses to national powerhouses are no reason to drop the Bullpups out of the top-five. Head Coach Matty McIntire’s Gonzaga Prep team has racked up quality wins against Mt. Spokane, Modesto Christian (Modesto, CA), and Lake Oswego (Lake Oswego, OR), but probably won’t be challenged again until playoff time.

The Crusaders join Union as one of the biggest surprises to start the season. They have yet to be really tested so far but that should change with a tough road game against uber-talented No. 18 O’Dea on Tuesday night. They can solidify their spot here with a win.

Federal Way jumps to the number 1 spot after starting 11-1, with their lone loss to California powerhouse Rancho Christian and wins over Bishop O’Dowd (Oakland, CA), Chino Hills (Chino Hills, CA), and Sheldon (Sacramento, CA). Potential national player of the year Jaden McDaniels and Co. look to build on a dominant first half in which they have won by an average of 37 points per game.