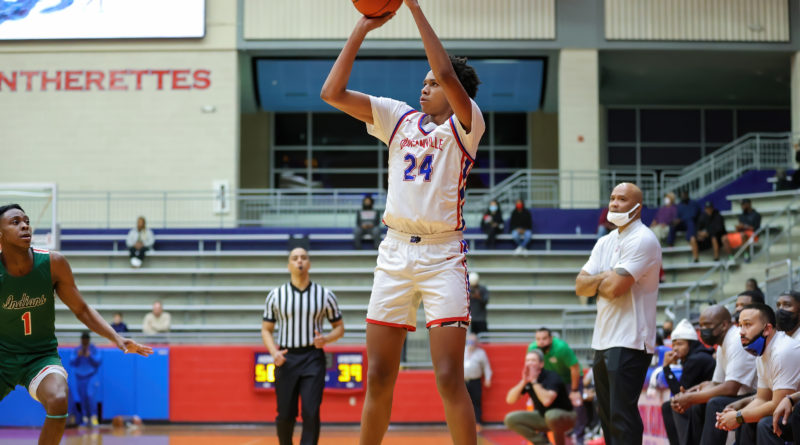 A competitive week of district play was headlined by several girls basketball standouts, who put the rest of the state on notice with a barrage of 40+ point individual performances to ring in the new year with a bang.

Here’s a look at the top individual performances in Texas high school basketball across the state for Jan. 3-9.

Nunez led Wagner to back-to-back District 27-6a victories this week over Cibolo Steele (71-68) and San Antonio East Central (86-67). He dropped a game-high 35 points against East Central and averaged 24.5 points, 6.5 rebounds and 2.0 steals per game to extend the Thunderbirds’ active winning streak to six.

Pritchett shined in a pair of losses to San Antonio Warren and San Antonio Brennan this week for Jay, averaging 32.5 points on 48.0% shooting in addition to 4.0 rebounds and 4.0 steals per game.

Yates starred on both the offensive and defensive ends of the floor during tournament play for United, helping the team tally a 4-1 record with wins over Baytown Lee, Ridge View (South Carolina), Wright (Louisiana) and Port Neches-Groves and a loss to Newton (Georgia) in the Sugar Bowl Classic in New Orleans. He averaged 18.8 points on 40.6% shooting — reaching double figures in all five of the Timberwolves’ tourney games — with 3.4 rebounds and 3.8 steals.

Ejiofor played a nearly perfect game in Garland’s only contest of the week, a 50-37 win over Sachse, with an 18-points, 20-rebound double double. He also tallied six blocks and shot 72.7% from the floor in the Owls’ victory.

Cole led White to back-to-back blowout wins against Dallas Adams (66-46) and Carrollton Creekview (80-34) behind the strength of his efficient shooting and rebounding. He posted consecutive double doubles by averaging 20.0 points and 13.5 rebounds per game on 79.2% shooting.

Crocker Johnson tallied two straight double doubles to lead Warren to a pair of victories over San Antonio Jay (81-61) and San Antonio Holmes (68-48). He averaged 20.5 points per game on 16-of-22 shooting to go with 12.0 rebounds per contest.

In Marshall’s only game of the week, a 78-67 loss to San Antonio Harlan in district play, Dunes impressed by scoring 21 points on 7-of-10 shooting with 14 rebounds and eight blocks.

Wasurick shined in Caddo Mills’ 55-54 victory over Farmersville with a 24-point, 19-rebound double double on 11-of-21 shooting. He also tallied 15 points on 5-of-7 shooting to go with nine rebounds and five blocks in a 49-47 loss against Mabank.

Cantu’s big game against Poteet helped Dilley roll to a 48-29 victory to kick off 2022. He scored 17 points on 6-of-15 shooting with seven steals, six rebounds and three assists to give the Wolves their fifth straight win.

Black, a five-star Class of 2022, recruit helped No. 3 Duncanville improve to 17-1 overall this season with 15 points in a 71-55 win over Mansfield Lake Ridge. He also helped lead the Panthers, ranked No. 3 nationally in SBLive/SportsIllustrated’s Power 25, to a 54-42 victory over Waco Midway.

Washington tallied a double double with 24 points, a team-high 10 rebounds and four assists for Mansfield Timberview in a 68-66 win over rival Mansfield Summit in the team’s only game of the week.

Beltran helped PSJA North add onto its four-game winning streak with victories over Edinburg Economedes (57-45) and Mission (61-41) in District 31-6A. The Raiders’ junior tallied 25.5 points and 9.5 rebounds per game on 24-of-36 shooting.

Milender helped Clear Brook secure its seventh and eighth straight wins over Clute Brazoswood (85-41) and Dickinson (67-53) to help the Wolverines improve to 23-3 overall. He led his team in scoring with 19.0 points per game on 50.0% shooting with 4.0 rebounds, 2.0 steals and 1.5 assists.

Alvord dropped a career-high 48 points for Alvord in an 86-42 blowout win over Tioga in her team’s first game of 2022.

Hutka secured her 1,000th career rebound to help Royse City pick up back-to-back landslide victories over Greenville (67-29) and Crandall (52-42). She posted a double double against Greenville with 14 points, 10 rebounds, five assists and two steals, and also led the way versus Crandall by tallying 14 points, nine rebounds, seven assists, three steals and a block.

Borchardt caught fire to help Lampasas extend its three-game winning streak with a 44-37 victory at Austin Savio and an 88-23 blowout win over Gatesville in district play. She shined with an 18-point, 10-rebound, 10-assist triple double against Gatesville.

Sneed turned heads around the state in Wagner’s return to District 27-6A play last week in an 82-81 loss to Cibolo Steele. She scored a career-high 51 points and hauled in 12 rebounds and five steals to earn a rare 50-point double double while converting 22 of 27 free-throw attempts and shooting 60.9% from the floor.

Carlton made her only game action last week count with a statement performance in a 72-52 district win against Katy Tompkins. She scored a game-high 40 points, including 19 of her team’s first-quarter points, to help Seven Lakes stay perfect against District 19-6A competition.

Perkins continued to dazzle on the court with back-to-back double doubles in a 42-32 win over Tomball Concordia Lutheran and a 51-39 loss to Houston Village. She averaged 19.5 points, 13.0 rebounds, 3.5 blocks and 2.0 assists per contest during the two-game stretch.

Matthews shot the lights out last week to help Westfield split a pair of games with a 60-36 victory against Katy Taylor and a narrow 45-42 loss to Langham Creek. She converted 18 of 37 shot attempts and averaged 22.0 points per game on 18-of-37 shooting to go along with 10.0 rebounds, 3.0 steals and 2.5 assists.

Dauenhauer scored a near career-high and eclipsed 30 points offensively for the third time this season in a dominant 65-45 victory over Lake Worth. She helped the Porcupines earn their first district win of 2022 in blowout fashion by recording 31 points, eight rebounds, seven steals and four assists.

Mosley, a senior, made a huge splash in her team’s first game back from winter break against Whitney. She led the way in Troy’s lone contest of the week and turned in a goliath 49-point, 22-rebound double double to secure a 79-65 victory. Mosley also added five steals, four assists and two blocks while shooting 56.5% from the court.