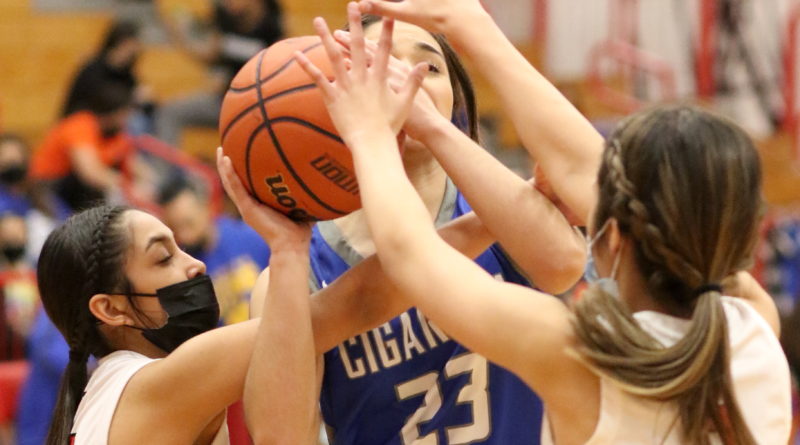 “We are really excited to come out of this with a win,” Cigarroa head coach Mary Tobias-Encinas said. “Coach (Rene) Rodriguez has done a great job with the program over the years so we know that we always have to come in here ready to battle it out on the court. Hats off to my girls, they did a good job and stuck with it. They are resilient and we are just glad to come out with a win.”

Cervantes was relentless on the boards and that was key in Cigarroa’s victory. She put herself in a position to create her own offense, going after missed shots and putting the ball back in the basket.

Martin (6-17, 0-1) did not have an answer for Cervantes who utilized all of her 5-foot-11 frame in the paint. When she was not busy in the paint, Cervantes was running the lanes on Cigarroa’s transition offense. She was a key factor early on in the game, scoring nine of Cigarroa’s 19 points in the first half.

In the second half Laredo Cigarroa unleashed a full court press that created havoc for Martin who had a hard time establishing and offense and were forced to take awkward shots from the perimeter.

Laredo Cigarroa also neutralized Laredo Martin’s big offensive threat, Kiara Gonzalez, who was held to 10 points. When Gonzalez drove the lane, she was immediately met by a slew of Lady Toros, forcing her to kick the ball out to her teammates.

Gonzalez was able to penetrate consistently and earned each one of her 10 points, but beyond her the Laredo Martin offense stalled. The Lady Tigers never scored in double figures throughout the four quarters.

For Laredo Cigarroa it was the Cervantes show the entire second half. She was relentless in her pursuit of the ball and never let up on the boards.

Cervantes opened the third quarter by scoring four points, but her biggest quarter of the game came in the final frame. She dropped 15 points to single-handedly outscore Martin who had five points, all coming from the free throw line.

Laredo Cigarroa only allowed three field goals in the second half – none coming in the final quarter.

Senior Brianna Mariscal finished with 11 points for Laredo Cigarroa, but had a hard time from the free throw line, going 2-of-12 on the night.