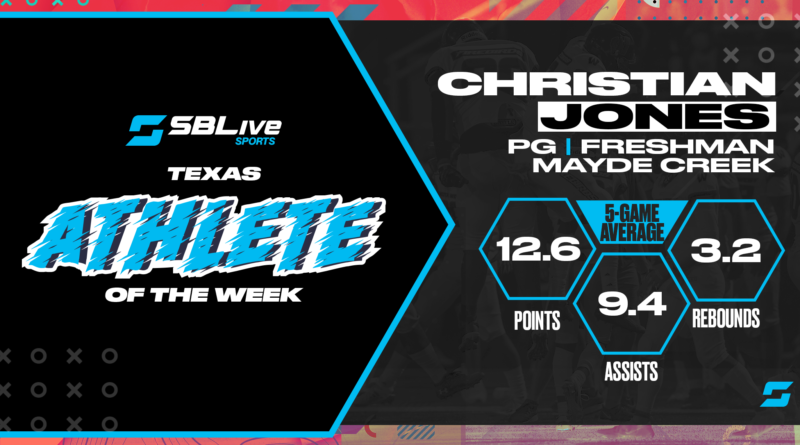 Jones propelled Mayde Creek to a 5-1 record during winter break, which included five double-digit victories and a second-place finish in the Leander Glenn Holiday Classic. Jones recorded 12.6 points, 9.4 assists, 3.2 rebounds and 1.2 steals per contest in the Rams’ five wins.

Jones received 33.88% of the vote, beating out Duncanville’s Kenidi Glover who finished second with 26.27%. League City Clear Falls’ Orlando Horton Jr. finished third with 19.4% and Little Cypress-Mauriceville’s Keely Washburn finished fourth with 9.22%. There were over 54,000 votes tallied this week!

During a three-game stretch that featured losses to Cypress Park, Fort Bend Elkins and Fort Bend Hightower over winter break, White averaged 29.3 points per game on 41.8% shooting as well as 11.7 rebounds.

Wallace helped lead Richardson to a Whataburger Tournament championship and five winter break victories to add onto the team’s six-game winning streak. He averaged 20.3 points per game in tourney play highlighted by his 23-point performance, which included five overtime points and the game-clinching free throw, in a 60-58 OT victory over Duncanville in a clash of the state’s top two ranked teams.

Foley averaged 28.4 points per contest during a five-game stretch dating back to a Dec. 20 loss to South Houston (68-46). He’s helped the Ricebirds win four straight games, however, including a three-game run when he dropped 33, 34, and 35 points in tournament victories against Yoakum, Palacios and Royal, respectively.

Perales helped the Bulldogs win four in a row during winter break by averaging 27.3 points, 2.8 rebounds, 2.8 steals and 2.5 assists. He really elevated his performance in Somerset’s final game of 2021, though, by dropping a game-high 43 points on 7-of-15 3-point shooting in a 101-45 victory over Fredericksburg.

Yates helped lead the Timberwolves to a 4-1 winter break record with a loss to North Little Rock (Arkansas) and wins over Crosby, Nederland, St. Louis Christian Brothers (Missouri) and Pine Bluff Watson Chapel (Arkansas). He poured in 21.0 points per game on 45.3% shooting to go along with 3.2 rebounds and 2.4 steals.

Washington helped Mansfield Timberview notch a 4-1 winter break record, including wins over McKinney and Waxahachie in the Whataburger Tournament in Saginaw. He averaged 22.2 points, 10.0 rebounds, 2.8 assists and 2.6 steals during those five contests.

Baum ended 2021 with a bang by setting a new school record with 44 points in the Chargers’ last game of the year, an 84-51 victory over Seguin. He helped lead Champion to five straight winter break wins by 20+ points, including a 3-0 record at the Boerne ISD Tournament.

Horton thrived during a four-game winter break run that ended with a 3-1 mark for Clear Falls and featured a pair of significant victories over Pearland (60-53) and Cypress Woods (64-58) in the Eric Medina Classic in Pasadena, against whom he dropped 23 and 31 points, respectively. He also tallied 24 points, six rebounds and five assists and posted 15 points, six steals, five rebounds in a victory against Klein and three assists in a district win over crosstown rival Clear Springs.

McDermott recorded double doubles in all five of Washington’s winter break games to help his team enter 2022 riding a three-game winning streak after beating Angleton (88-71), Brazosport (82-79) and Katy Cinco Ranch (67-63) in the Brazosport Tournament. He averaged 23.2 points, 13.6 rebounds and 3.2 steals per contest, but shined brightest in the championship game against Angleton where he dropped a career-high 47 points on 19-of-25 shooting in addition to 13 rebounds, nine steals and four blocks.

McManus led the Chaparrals to a team title in the William Roberts Memorial Tournament in Round Rock to help Westlake add onto its 20-game winning streak with five winter break wins. He was given tournament MVP honors after scoring 26 points and draining six 3-pointers in a 79-47 championship game victory against San Marcos.

Miller garnered tournament MVP honors and led Concordia Lutheran to a tournament championship at the Houston Private School Invitational and five winter break victories, padding a six-game winning streak. He averaged 22.0 points and 6.0 assists in tournament play and tallied 24 points on 8-of-14 shooting, five assists, four rebounds and three steals in his top performance of late December in a 93-78 victory against Westbury Christian.

Chavez dominated during a six-game stretch in late December that included five straight 20+ point performances, averaging 25.5 points per game on 59.8% shooting to go along with 14.2 rebounds, 4.7 blocks and 3.8 assists to help Monterey secure four victories.

Hernandez continued to assert herself as one of the top post players in South Texas by recording her fifth, sixth and seventh consecutive double doubles in wins over rival PSJA North and La Joya and a loss to Edinburg Vela. She averaged 25.0 points, 11.7 rebounds and 2.7 steals per contest on 28-of-52 shooting during the Bears’ three most recent games.

Williams averaged 24.0 points per game, including back-to-back 32-point performances, on 41.8% shooting in four winter break contests for Saginaw. She also added 7.3 rebounds, 6.0 assists and 5.3 steals during that four-game stretch.

Jaeger helped Fayetteville roll into the new year in the midst of a three-game winning streak after claiming lopsided winter break wins against Snook (42-23), Holland (56-38) and Nordheim (46-14). In her last four games, she has averaged 16.8 points, 9.3 rebounds, 6.5 steals and 5.3 assists per contest.

Kimpson caught fire during winter break and led Little Elm to a 2-2 record behind several impressive offensive performances against Allen, Princeton, Prosper and Wylie. The junior averaged 26.3 points per game on 50.6% shooting — including a 25-of-31 clip from the free-throw line — in addition to 7.8 rebounds and 4.0 steals.

Metting caught fire during Yorktown’s final games of 2021 on the hardwood, leading her team to a 4-1 winter break record and a third-place finish at the Nixon-Smiley Tournament. Her best performance, however, was a dominant New Years Eve performance highlighted by scoring 41 of her team’s 49 total points in a six-point win over District 31-2A rival Three Rivers.

Alvarado led Class 1A San Isidro to a 4-1 winter break mark and signature victories against Class 4A foes Port Isabel (49-30) and Zapata (43-26). She averaged 17.0 points, 5.2 rebounds and 2.8 blocks per contest during that five-game period.

West averaged 20 points and 11 rebounds for Crandall during a dominant 4-0 sprint to the Hallsville Fidelity Christmas Classic Tournament championship after picking up big wins over Longview, Jasper, Mount Pleasant and Pleasant Grove. She helped the Pirates win five straight throughout winter break, but was best in the team’s tourney opener against Longview when the junior tallied 24 points, seven rebounds and four blocks during the first half.

Hull was named the Whataburger Tournament MVP in the girls blue division after helping lead Peaster to a team tournament title. She averaged 22.8 points per contest during a four-game tournament run, and her performance was highlighted by a 24-point showing in the championship game to help the Greyhounds knock off previously undefeated Tuscola Jim Ned 64-48.

Glover earned tournament MVP honors while helping lead Duncanville to a championship game victory in the Sandra Meadows Classic in Duncanville during the Pantherettes’ final contests of 2021. The freshman shined in the title game with a team-high 23 points in a 78-76 victory over Conway (Arkansas).

Dawson, a freshman, thrived at the Kaufman Holiday Tournament and was awarded all-tournament recognition after leading Malakoff to a 4-0 tourney record with wins over Athens, Elkhart, Tyler High and Whitney. She averaged 21.5 points, 10.8 rebounds and 2.3 steals per game in tournament play while tallying three straight double doubles highlighted by a 14-point, 10-rebound performance in a 56-53 title game victory against Tyler.

Esnard scored a career-high 27 points in a dominant 59-41 victory over Maypearl in the tournament play. She helped guide Gunter to a 4-1 record during winter break and the Whataburger Tournament consolation bracket championship with her shooting, and was selected to the all-tournament team for her performance.

Burks, a sophomore, made a huge splash in her debut appearance in the Kiwanis Tournament at Navarro College by going off for a career-high 40 points and recording a triple double with 10 rebounds, 10 steals and four assists in a tourney-opening 68-26 blowout against Dawson. In total, she averaged 35.0 points per contest in Rice’s three tournament wins.