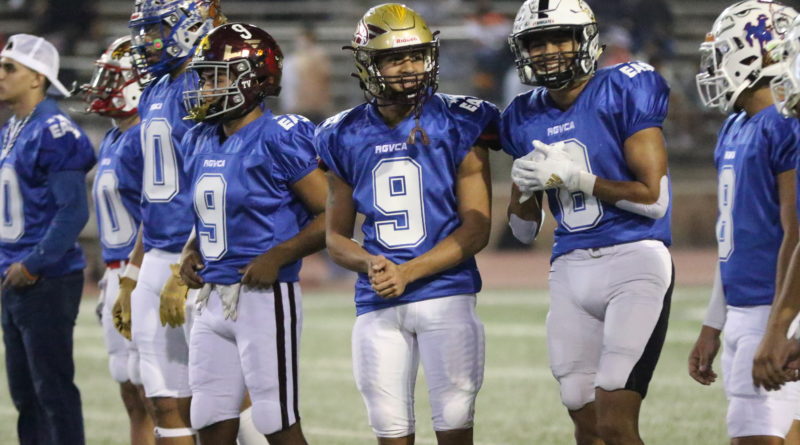 HARLINGEN, Texas – The stars came out Saturday night as colors meshed and rivalries were put to the side.

The Rio Grande Valley Coaches Association East-West All-Star Football Game unfolded at J. Lewis Boggus Stadium after a two-year hiatus. Seniors from the entire Rio Grande Valley were divided into two teams and they left everything on the field in the final high school game for some of the players.

After a scoreless first half it was the East All-Stars that outlasted the West and rolled off 21 unanswered points in the second half to win the RGVCA All-Star game 21-17.

Both offenses were able to move the ball up and down the field and each team was able to make key stops to force a punt. In the opening quarter West’s defense made a key interception by linebacker Jose Sandoval.

The game’s first points came from the foot of Donna North’s D’Andre Quezada who booted a field goal with 6:39 left in the third quarter to make it 3-0 in favor of the West All-Stars.

On the kickoff, the East’s Austin Davila made a great return, dodging the West defense and was later brought down after racking up 30 yards. The East All-Stars had two big offensive plays to score the game’s first touchdown. Quarterback Michael Trevino connected with Jerimiah Corbin for a 25-yard reception to put the ball on the 22-yard line. On the ensuing play Harlingen South’s Jeremiah Rivera took a handoff and scrambled his way into the end zone for the game’s first touchdown to give the East team a 7-3 lead with 1:59 left in the third quarter.

The East All-Stars decided to pull an onside kick, catching the West off guard. The ball was recovered by the East’s Raymond Reyes who suited up for Brownsville Hanna during the season.

The East defense was not done as Levin Inns brought down West quarterback in the backfield with a big hit, forcing a fumble that was recovered by Brownsville Hanna’s Humberto Garcia.

With the ball on the five-yard line Mercedes quarterback Michael Cisneros connected with Corbin from San Benito to make it 14-3 with 9:25 left in the fourth quarter.

The West All-Stars were able to move the ball into scoring position, but the East defense held their ground and forced a field goal. The East defense came up big with a blocked punt that was recovered by Harlingen’s Christian Luna who ran the ball back for an 85-yard touchdown. Jose Medrano booted in the extra point as the East took a commanding 21-3 lead with 6:26 left in the game.

The West finally got into the end zone as Dylan Velasquez scored on a 15-yard touchdown reception. The two-point conversion failed as the score stood at 21-9 with 5:03 on the clock.

The West kept plugging away and broke through again on a touchdown reception by Marcos De La Cruz with 2:43 left in the game. Jaden Tovar tacked on the two-point conversion to account for the final score.