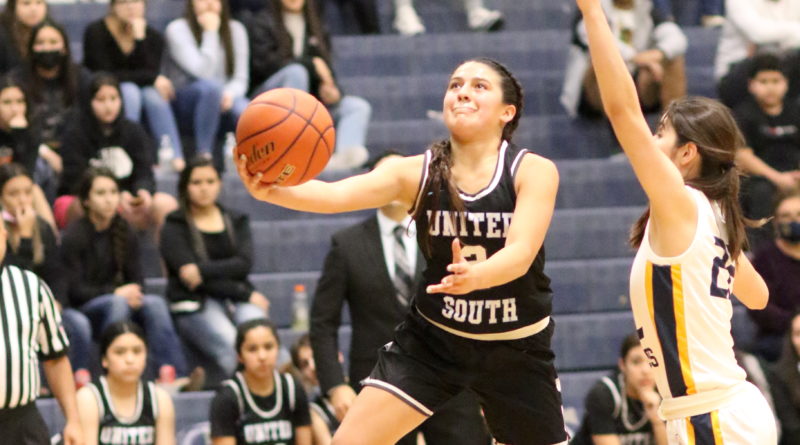 LAREDO, Texas – The Laredo United South girls basketball team has been on a mission since last year when they had to share the District 30-6A title with Laredo United.

The Lady Panthers (22-4) opened the district season with three teams that are expected to fight for a postseason spot and went 3-0 in that stretch. On Monday Laredo United South completed the sweep with a 51-37 victory over Laredo Alexander and head into the UIL mandatory break with a perfect 3-0 district record.

Laredo United South unleashed a balanced offense that has multiple players who can score in double figures, including all five starters. The Lady Panthers were paced by junior Bridgette Tello who poured in a game-high 18 points. Tello opened the game with a triple and went 4-for-5 from the free throw line. The 5-foot-7 guard has a quick trigger and can also attack the basket with her uncanny speed.

Senior point guard Dezerae De La Garza finished with 13 points, all coming in the opening half. De La Garza followed Tello and pulled the trigger from the 3-point line to give Laredo United South a 6-0 lead. She went on to add a lay-up in transition as the Lady Panthers jumped out to an 8-0 lead early in the game, forcing a timeout from Laredo Alexander.

The Lady Bulldogs finally got on the scoreboard on a bucket by senior Kayla Herrera who is Alexander’s offensive leader. Herrera, who came in averaging 19.5 points per game, was held to 10 points.

Laredo United South senior Angie Lopez got Herrera out of her rhythm and closed lanes to the basket as Alexander struggled to stay on target with the Lady Panthers who took a 13-5 lead at the end of the opening quarter.

Laredo Alexander (13-9, 1-1) turned to senior Sophia Villalobos who scored a team-high 11 points. Villalobos opened the second quarter with a layup and ignited a 5-2 run. De La Garza canned her third triple of the game to push Laredo United South ahead 18-10 with 4:15 left in the first half.

Teams traded baskets for the next two minutes, but it was Laredo Alexander who finished with a 4-2 run, including a triple by senior Jaci Rendon as time expired.

Laredo United South held a 26-18 lead at halftime, but the 10-minute break did little to slow them down in the second half. Senior Millie Hernandez hit a basket as the Lady Panthers opened the third quarter with a 11-2 run and build a 37-20 lead.

Villalobos scored six points in the period while Tiffanie Alvarado added a free throw to account for all of Laredo Alexander’s offense in that frame.

As a team Laredo Alexander struggled from the free throw line and that proved to be the difference of the game. The Lady Bulldogs shot 57 percent (12-for-21) from the charity stripe while Laredo United South was 82 percent (9-for-11).

Laredo United South gets back on the court on Dec. 29 when they welcome Converse Judson at 2:30 p.m. They have met twice early in the season, splitting their games. Laredo Alexander plays on Jan. 4 against Eagle Pass.