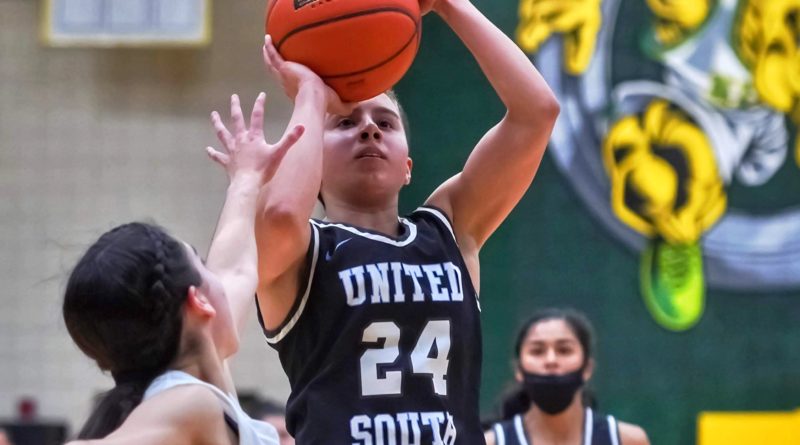 The Lady Panthers, ranked No. 23 in SBLive’s statewide rankings, picked up a 56-26 victory over Laredo Nixon on Friday night to remain perfect in district play heading into Monday’s much anticipated matchup against Laredo Alexander.

Junior Rebecca Hernandez led the way with 10 points while junior Bridgette Tello and senior Angie Lopez chipped in with eight each in limited play after only playing the first half of the game.

The Lady Panthers (21-4, 2-0) have been burning the nets in their two first district games, averaging 55.5 points per game while holding opponents to 27 points. Against Laredo Nixon, the Laredo United South defense was disruptive from the opening tip and helped them jump out to a 10-0 lead, forcing an early timeout from Laredo Nixon head coach LeaAnn Mendoza.

Laredo Nixon (14-11, 0-2) did not score its first basket of the game until the 1:10 mark when Danica Robles connected on a layup on a missed assignment by the Lady Panthers. That was the only points the Laredo United South defense allowed in the frame as Laredo Nixon struggled to find a seam to the basket.

While Laredo Nixon struggled to get their offense flowing, Laredo United South utilized the tandem of Hernandez and Tello, along with Lopez who attacked the basket. Hernandez dominated the paint and worked hard for offensive rebounds to account for the majority of her points.

Laredo United South built a 16-2 lead to open the second quarter before Laredo Nixon put together a 5-0 run on baskets by Abby Esparza and Robles to close the gap to 16-8. That was the last time Laredo Nixon came within 10 points of Laredo United South as the Lady Panthers started to attack the basket and finished on an 11-2 run to take a 29-12 halftime lead.

The second half belonged to the Laredo United South reserve players that played the majority of the minutes. The Lady Panthers did not skip a beat and continued to attack Laredo Nixon in all facets of the game.

After building a 41-19 lead at the end of the third quarter, the starters were on the bench, resting for Monday’s key District 30-6A game against Laredo Alexander.

Brianna Flores scored seven points in the second half to lead all reserve players while freshman Sierra Sanchez scored five and Cristabel Cortez connected on a triple, Regina Hernandez hit a basket and Kaydie Gonzalez iced both of her free throws as Laredo United South scored 15 points in the fourth quarter.

Laredo Nixon’s Larissa Madrigal was a bright spot for the Lady Mustangs, scoring all 11 of her points in the second half. Madrigal had five in the third quarter after hitting a triple and field goal before dropping six baskets on hard layups to the basket. Only five players scored for Laredo Nixon compared to Laredo United South who had 11 out of the 15 players contribute on the offensive end.

Laredo United South takes on Laredo Alexander on Monday at 7:30 p.m. in a game that was originally scheduled for Tuesday but was moved up a day. Laredo Alexander is undefeated in district play after taking down Laredo Nixon on Tuesday. The Lady Bulldogs (13-8, 1-0) were idle on Friday.

Laredo Nixon is still searching for their first district win as they travel to Eagle Pass on Tuesday at 7:30 p.m.