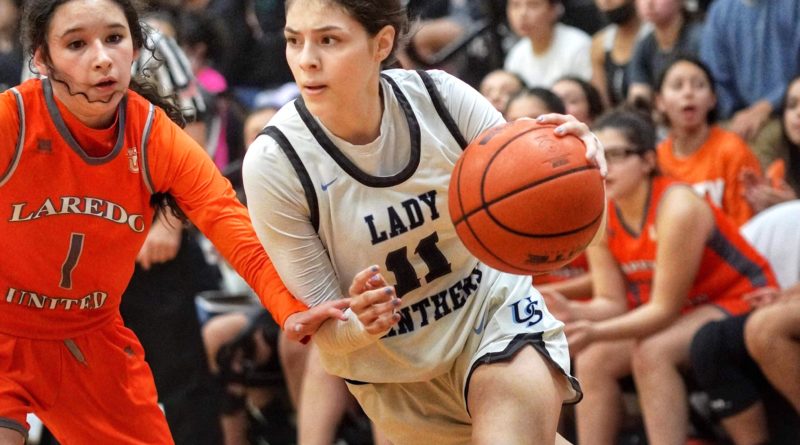 Laredo United South (20-4, 1-0), ranked No. 23 in SBLive’s statewide girls basketball rankings, was led by a pair of players who can burn the nets. Junior Bridgette Tello poured in a game-high 14 points to pace the Laredo United South offense while senior Dezerae De La Garza added 11 points.

Laredo United (16-7, 0-1) came into the contest averaging 10 triples per game after connecting on 220 during the preseason. The Lady Panther defense took away all of Laredo United’s three-point threats with tight man-to-man that did not allow much breathing room from any spot beyond the arc. The Lady Longhorns only hit one during the entire game.

Junior Rebekah Beltran hit the opening basket to give Laredo United a 3-0 lead and that was the only time the Lady Longhorns led the rest of the game.

With Laredo United’s three-point offense gone, the Lady Longhorns attempted to work the ball in the paint with Valeria Costilla who valiantly fought off Laredo United South’s Rebecca Hernandez who is one of the most versatile players. Hernandez kept Costilla in check the entire night and forcing her to kick the ball out to the perimeter.

After Beltran’s triple to open the game, Laredo United South went on a 10-0 run that was ignited by De La Garza. She hit a layup and was followed by a triple by senior Angie Lopez and a pair of free throws by Tello.

The Lady United defense was busy keying on De La Garza and Lopez to free up senior Millie Hernandez who connected on a triple to give Laredo United South a 10-3 lead with 4:12 left in the opening quarter.

The Lady Longhorns only score a pair of baskets in the last four minutes while Rebecca Hernandez hit a triple with time expired to give Laredo United South a 17-7 opening quarter lead.

Laredo United did not fade and came back in the second quarter, opening with a 7-2 run to close the gap at 19-13 and that was the closets they would get the rest of the game. Laredo United South rolled off a 9-2 run to take a 28-15 halftime lead.

The second half was all Laredo United South as Laredo United struggled to put points on the board due to the tight man-to-man defense the Lady Panthers played all night. Laredo United was held to nine points in the third quarter – three field goals and three free throws – to account for all the scoring in the frame.

The Lady Panther defense also shut down Laredo United’s top scorer in sophomore Jesslyn Jalomo. She came into the game averaging 15.4 points per game and only had seven – a field goal and five free throws.

Both teams return to District 30-6A action on Friday as Laredo United South plays Laredo Nixon on the road at 7:30 p.m. and Laredo United welcomes Eagle Pass at 7 p.m.