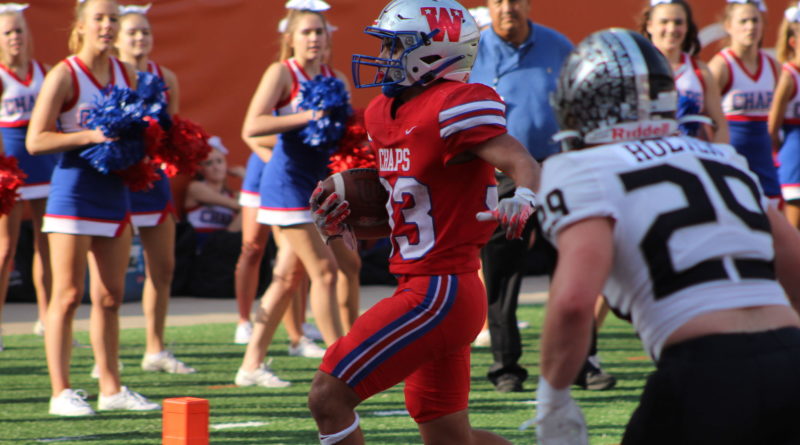 Westlake’s O-line commanded the trenches and set the table for Kayser, Klubnik and others to feast offensively.

Kayser scored on back-to-back touchdown runs on Westlake’s first two offensive possessions of the game. He found the end zone four more times during the second quarter on runs from inside the Vipers’ red zone.

Klubnik led a nearly unstoppable offensive attack for the Chaparrals in front of Clemson head coach Dabo Swinney, who watched the opening half from the sideline.

Westlake’s senior quarterback scored his only touchdown of the game on a read option run on third and goal to take a 21-0 lead during the late stages of the first quarter. Klubnik flashed his athleticism and elusiveness on several long scrambles, but also shredded Vandegrift’s secondary to help lead the Chaps to a commanding 56-0 halftime advantage.

Westlake’s defense, however, was even more dominant.

The Chaparrals scored their only non-rushing touchdown of the first half on a pick-six during the middle of the second quarter.

That defensive score highlighted a monster first half for Westlake that included four interceptions, a pair of blocked punts and a fumble recovery at the Vipers’ 1-yard line, which gave the Chaps’ a big advantage in the battle for field position.

The season-ending loss drops Austin Vandegrift to 12-2 overall and snaps a three-game winning streak for the Vipers that began in the opening round of postseason play.

Westlake, meanwhile, remains undefeated and improves to 14-0 on the year with another dominant playoff win that extends the program’s winning streak to 38 straight victories, the longest active winning streak throughout Texas high school football.

The Chaparrals have been especially spectacular during the postseason, where the team has yet to trail any opponents and has collectively outscored Hutto, New Braunfels, PSJA North and Vandegrift 236-16.

Austin Westlake, the two-time defending state champion, advances to the state semifinals for the third consecutive season to face the Katy Tigers (14-0) in a showdown between two top-10 teams nationally in SBLive’s final Power 25 rankings of the regular season at a time, date and place still to be determined.