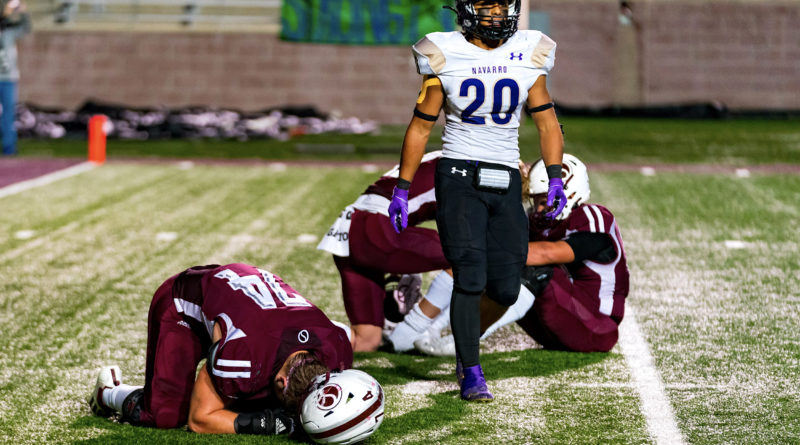 Sinton dominated the game for the majority of the first half, capped by quarterback Rene Galvan finding JR Cruz on a long touchdown pass to take a 14-0 halftime lead.

Galvan used his running skill and power to force his way into the end zone on a one-yard run to give Sinton a 21-14 lead late in the fourth quarter. Navarro quickly answered with a long drive that featured a big catch from Brody Whitson that put the ball inside the Pirates’ 10-yard line. Cole Mauser punched it in from five yards out to tie the game at 21-21 with just under one minute left.

Galvan, who rushed for 146 yards and three touchdowns, tried to march the offense down the field to win the game, but he threw an interception looking for Kaden McCoy deep down the field.

Sinton got the ball first in overtime and Galvan scored on a 9-yard run to give the Pirates a 28-21 lead.

Navarro came out and pounded the ball at the heart of the Pirates’ defense, moving the ball inside the Pirates’ 5-yard line. Mebane then scored on a 1-yard run to make it 28-27. After a flurry of timeouts Navarro sent their offense back out and Mebane scored the game-winning two-point conversion, driving through Pirates’ tackles and falling forward into the end zone for the 29-28 victory.

Navarro (10-2) will face Cuero in the Regional Final next week.

Sinton finishes the season with an 11-2 record as back-to-back district champions.