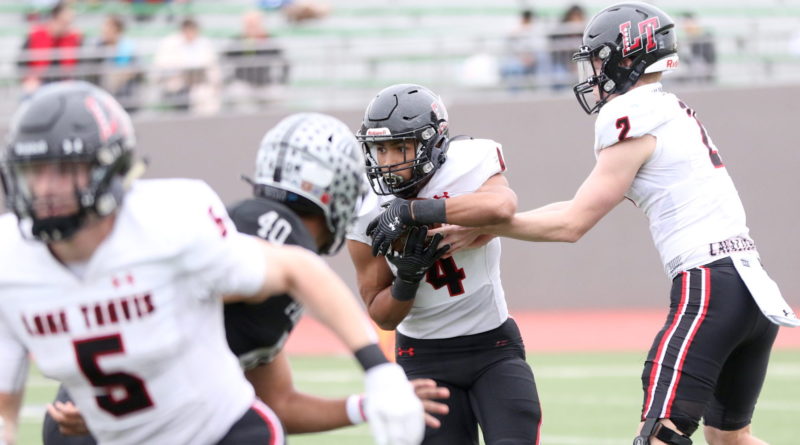 SAN ANTONIO, Texas – Lake Travis’ DJ Johnson exploded for a 69-yard touchdown run on the opening play and the Cavaliers never looked back in a 35-19 win over Laredo United South in a Class 6A regional semifinal Friday at Alamo Stadium.

Johnson finished with 211 yards rushing and three touchdowns for Lake Travis (11-2), who moves on to face the winner of Austin Bowie vs. San Antonio Brennan next week.

After Johnson gave Lake Travis an early lead, Laredo United South (9-4) responded with a long drive, but Christian Gonzalez missed a short field goal to keep the score at 7-0.

Laredo United South finally started to gain some momentum and moved the ball on runs by junior running back Brandon Benavides and catches by Javier Rodriguez. The drive culminated on a 6-yard touchdown run by Benavides to make it a 14-7 game with 8:19 remaining in the opening half.

The Panthers’ momentum was short-lived as Lake Travis quickly moved the ball down the field before Johnson broke loose for a 32-yard touchdown run, his third of the game, to give the Cavaliers a 21-7 lead with 6:40 left in the first half.

The Cavaliers tacked on one more first-half touchdown as quarterback Bo Edmundson connected with Chernet Estes on a 21-yard TD reception to make it a 28-7 just before haltime.

Nico Hamilton scored Lake Travis’ final touchdown of the game on a 1-yard run with 6:48 left in the third quarter to give the Cavaliers a 35-7 lead.

The Panthers scored two late touchdowns, the first coming on a 1-yard run by Cisneros to make it 35-13 with 6:16 left in the fourth quarter.

Gavin Espinoza picked off Edmundson with 3:11 to play to give Laredo United South another opportunity. After a 43-yard reception by Benavides, Cisneros found Rodriguez on a 4-yard touchdown pass for the final score of the game with 1:16 to play.