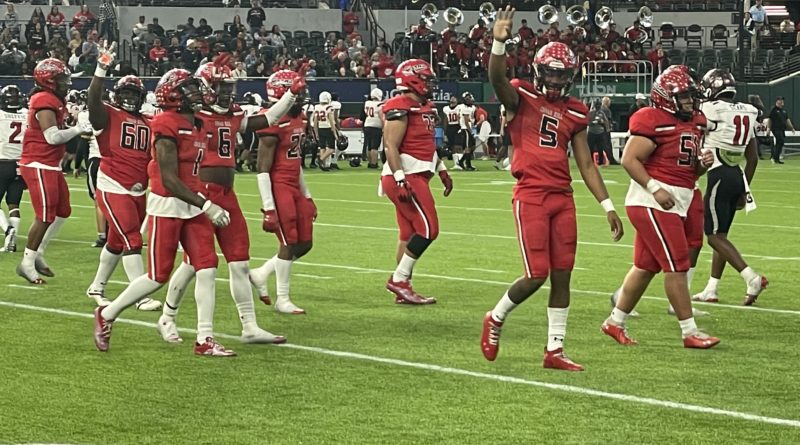 ARLINGTON, Texas — With precious seconds ticking away late in the fourth quarter, Tyler Legacy finally seemed to find the offensive momentum it had been searching for.

Thanks to a fake punt fourth-down conversion, the Red Raiders marched downfield to the edge of the red zone on Cedar Hill’s end of the field for the first time during the second half.

But the Longhorns’ defense delivered in crunch time.

Junior free safety Traveon Gaines converged with another Cedar Hill defender to pop the ball free for a defensive fumble recovery at the 22-yard line with just over 5 minutes remaining.

The monumental takeaway, the Longhorns’ second of the game, served as the exclamation-point finish to a dominant defensive performance that helped propel Cedar Hill past Tyler Legacy for a 21-7 area round win in the Class 6A Division II Texas high school football playoffs Saturday afternoon at Globe Life Field.

“This was about focussing, locking in and doing your job,” Cedar Hill junior quarterback Cedric Harden Jr. said. “I’m a junior doing this, so (playing here) is a big step, but I’m here for it.”

Cedar Hill set the tone defensively from the moment its second-round contest kicked off.

The Longhorns snagged an interception on the first offensive play of the game, which sparked a defensive stalemate that lasted throughout the first half.

Both teams were held scoreless through the end of the first quarter until Harden broke the seal by putting Cedar Hill on the board with a 3-yard touchdown run on a QB keeper 42 seconds into the second quarter.

Legacy responded with a 2-yard touchdown run by senior running back Bryson Donnell, the team’s only score of the afternoon, halfway into the second quarter on its last drive of the first half, which is when the tide began to turn in the Longhorns’ favor.

Cedar Hill’s defense flexed its muscle with a dominant display from the front seven to the secondary.

The Longhorns were exceptionally good defending against the run and locked down most of the available running lanes for Tyler Legacy. Cedar Hill’s defense held the Red Raiders to 155 rushing yards on

The Longhorns were arguably even better defensively against the pass.

Senior defensive back Jalon Peoples, another Texas Tech commit, led a lockdown performance by the Cedar Hill secondary that limited Tyler Legacy to 61 yards and an interception through the air on 4-of-18 passing.

“The defense really stepped up and improved a lot from the picks to the stops,” Harden said. “Those big stops on fourth down really gave us a boost and energy. We were just piggybacking off the defense’s energy.”

The junior demonstrated his dual-threat ability while spearheading a relentless rushing attack for the Longhorns.

Harden threw for 54 yards on 6-of-19 passing, but scored two of his team’s three rushing touchdowns while running for 55 yards and a pair of touchdown runs on 17 carries.

His 2-yard touchdown run with 2:08 left during the third quarter helped Cedar Hill retake the lead, while junior running back Jaylen Jenkins punched in a 2-yard touchdown run on the ensuing drive to give the Longhorns back-to-back scores and a two-possession advantage early in the fourth quarter.

“They all stepped up. It’s all thanks to my O-line. They’re my boys and I love ‘em,” Harden said. “We studied film on them, so we understood (what) their secondary and their linebackers (would do). We actually had to pick at their linebackers, but whatever will get us the win, we’ve got to punch it in.”

Donnell led Tyler Legacy with 68 total yards and a touchdown run on 14 touches while senior running back Jamarion Miller, a Texas commit, racked up 54 rushing yards on 14 carries.

The season-ending loss wraps up the Red Raiders’ 2021 campaign and drops Tyler Legacy to 6-6 overall this year.

Cedar Hill, however, improves to 8-4 with the second round victory and advances to the Region II semifinals in the 6A DII playoffs where the Longhorns will face Cypress Bridgeland (10-2), which defeated The Woodlands College Park 35-28 on Friday.

Bridgeland-Cedar Hill game details including the date, location and kickoff time are still to be determined.

“I feel like we can still improve more and we will improve more next week, y’all watch and see because Round 3 here we come,” Harden said. “We just need to lock in, that’s all.”