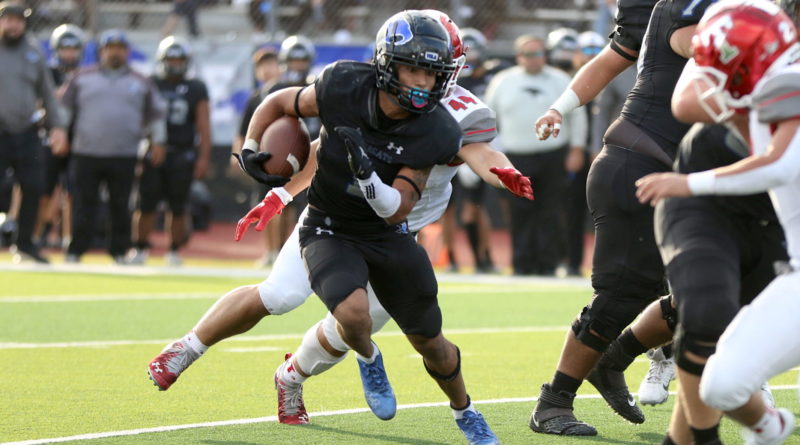 EDINBURG, Texas – Edinburg Vela survived a late surge by San Antonio Taft to pick up a 27-24 victory to capture the Class 6A Area Championship at Richard R. Flores Stadium on Saturday.

Senior P.J. Rivera has been the workhorse for the Sabercats all season long and the speedster exploded for 360 yards and three touchdowns.

The Sabercats remain undefeated on the season and picked up their 12th consecutive victory to advance to the regional semifinals where they will face Austin Vandergrift on Friday at Cabaniss Athletic Complex in Corpus Christi.

The Sabercats got on the board first on a field goal by Job Jacob with 7:14 left in the opening quarter.

Rivera broke loose for an electric 65-yard touchdown run in the second quarter to give Edinburg Vela a 10-0 lead. Rivera took the handoff from quarterback Chase Campbell and ran up the middle before shifting to the right side where he outran the Raider defense.

Hurt, who came in sporting over 1,000 yards on the ground, showed his speed on the next possession, reeling off a 55-yard run to put the ball on the 28-yard line. The Raiders could not take advantage, though, and their field goal attempt was blocked by the Edinburg Vela defense.

The Sabercats’ defense came up with an interception to conclude the first half as senior cornerback Joshua Garcia picked off Hurt with 28 seconds left. Edinburg Vela moved the ball into field goal position with one second left, but the kick sailed wide left.

On the opening possession of the third quarter, Rivera and Edinburg Vela put together a long drive, moving the ball all the way to the three-yard line. Out of a wildcat formation, Rivera scored on a 3-yard run to give the Sabercats a 17-0 lead with 8:01 left in the third quarter.

San Antonio Taft finally made some noise on a 15-yard touchdown reception by Julio Sanchez with 5:41 left in the third quarter to make it 17-7.

The Raiders then recovered an onside kick and marched down for a field goal to cut the lead to 17-10 with 5:39 left in the third quarter.

Four minutes later Rivera broke loose for a 67-yard touchdown run as Edinburg Vela extended their lead to 24-10 at the 1:48 mark.

After Rivera broke away for a 60-yard run, Edinburg Vela tacked on a field goal by Juarez to take a 27-10 lead with 10:06 left in the game. That proved to be all the scoring for the Sabercats as the Raiders mounted a late comeback.

But Edinburg Vela was able to hold off San Antonio Taft’s late surge and move on to the third round.