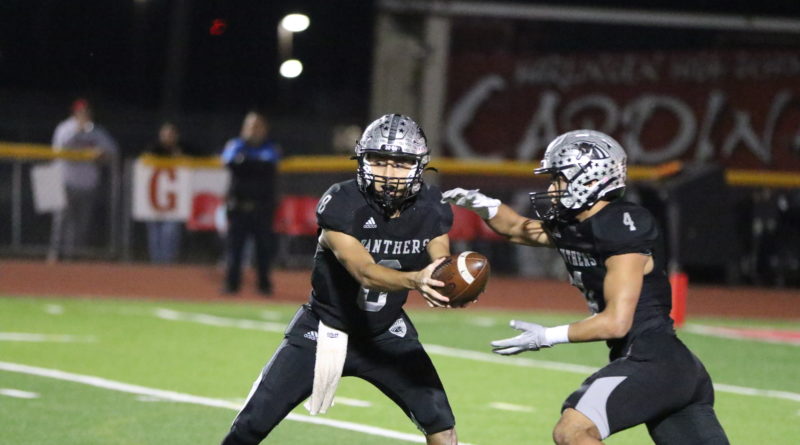 Senior Armando Garza had two touchdowns and an interception to lead Laredo United South to their second consecutive Class 6A Area Championship after taking down Harlingen 24-7 at Joe R. Sanchez Stadium in Rio Grande City on Friday. Since the loss to Harlingen in the season opener, Laredo United South has gone 8-2.

Garza was the workhorse for the Panthers on Friday, coming up with big plays on both sides of the ball. After Harlingen struck first on a 4-yard touchdown run by Joe Lopez with 2:27 left in the first quarter, Laredo United South responded with 24 unanswered points – and Garza got the ball rolling.

With Harlingen pinned deep in their own territory, Garza picked off a Lopez pass and returned it to Harlingen’s 20-yard line. Three plays later Laredo United South quarterback Luis Cisneros found a wide-open Garza for a 6-yard touchdown reception with 9:10 left in the second quarter. Christian Gonzalez booted in the extra point to tie the game at 7-7.

The Panthers took the lead behind another Garza touchdown after Cisneros found him in the end zone for a 5-yard touchdown catch to give Laredo United South a 14-7 lead with 1:26 left in the first half.

Javier Rodriguez, who is the second leading receiver and rusher for Laredo United South, scored on a 2-yard touchdown run to give the Panthers a 21-7 lead with 42 seconds left in the third quarter.

The “TNT” defense that has picked off a slew of quarterbacks this season, picked off two more Lopez passes in the fourth quarter. The first one came to open the fourth quarter by senior cornerback Orlando Lozano. The turnover resulted in three points as the Panthers eventually kicked a field goal with 1:47 to play to make it 24-7.

With less than two minutes to play, Harlingen was desperately trying to add a score when Lozano ended the game with his second interception.