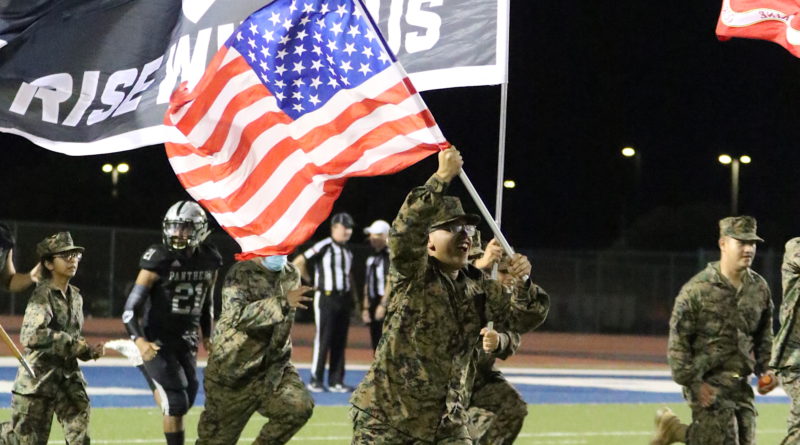 LAREDO, Texas – A year ago Laredo United South was set to play San Antonio Harlan in the opening round of the Class 6A playoffs, but the game never happened. San Antonio Harlan was put under quarantine after some positive cases of COVID, so the Panthers were awarded the victory and moved on to the second round.

On Friday night, they were finally able to settle it on the field as the Panthers earned a 28-21 victory over San Antonio Harlan in the first round of the 2021 6A playoffs.

Laredo United South’s “TNT” defense stole the show, coming up with four interceptions – including three in the fourth quarter – to give the Panthers their second consecutive Class 6A Bi-District Championship. Laredo United South will play the winner of Harlingen vs. Edinburg in the second round.

Senior defensive back Wence Lopez led the way with two interceptions in the fourth quarter. His second pick helped the Panthers preserve a seven-point lead with 2:11 left in the game.

After a back-and-forth first half that saw Laredo United South take a 14-13 halftime lead, the Panthers extending their lead to 21-13 in the third quarter on an 18-yard touchdown pass from quarterback Luis Cisneros to a wide open Brandon Benavides.

San Antonio Harlan quickly responded as Izayah Manchester returned the kickoff 45 yards to give the Hawks great field position. On the opening play of the series Hawks’ quarterback Xavier Walton found Jacob Jenkins for a 25-yard reception to move the ball down to the 3-yard line. On the next play Jacob Gonzalez took the handoff and bulldozed his way into the end zone to make it 21-19. The Hawks opted for a 2-point conversion and Walton found Donye Hunter in the middle of traffic to tie the game at 21-21 with 2:06 left in the third quarter.

Laredo United South opened the fourth quarter with a long drive that featured Benavides in the run game. The Panthers capped the drive with another Cisneros touchdown pass, this one a 27-yard dime to senior wide receiver Javier Rodriguez to give Laredo United South a 28-21 lead with 9:25 left in the game.

Then the Panthers turned up their “TNT” defense.

The first of Laredo United South’s three fourth-quarter interceptions came at the 8:32 mark as Walton attempted to squeeze the ball into a tight window and Lopez came away with the ball. The second interception came four minutes later and this time it was senior defensive back OJ Lozano who dove for a deep ball thrown in the middle of the field.

San Antonio Harlan was able to get the ball back one more time and had plenty of time to move the ball as the Hawks went to the air again. But Lopez intercepted a pass with 2:11 to seal the victory for the Panthers.

Cisneros connected with Javier Rodriguez on a 15-yard touchdown pass in the second quarter and Cisneros added a 3-yard touchdown run just before halftime.