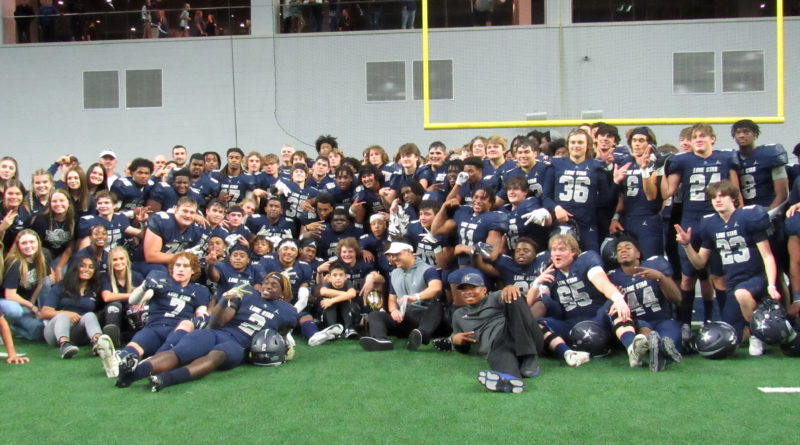 FRISCO, Texas – The Lone Star Rangers made a statement in their 74-6 romp over Bryan Adams in the opening round of the 2021 Class 5A Texas high school football playoffs on Thursday night.

The Rangers (9-2) stuck it to the Cougars (8-3) in virtually every aspect of the game. Defensively they allowed just 69 total yards, and whether it was a special teams punt return, an interception returned for six, or flat-out offensive dominance, the Rangers could not be stopped.

Senior running back Ashton Jeanty in particular was unstoppable, rushing for 130 yards and two touchdowns on just nine total carries.

Despite breaking numerous tackles and helping the Rangers jump out to an early lead, Jeanty remained humble and credited his team for the performance.

“Week in and week out we go to work,” he said. “I’ve got a great O-line, and a great quarterback and my coaches put me in great positions to make plays.”

Senior quarterback Garret Rangel was no stranger to the spotlight either, passing for 4 touchdowns and 188 yards on 80-percent completion.

Turner logged a blocked punt in the first half and Braxton contributed with a punt return touchdown later in the second half.

“Me and coach went to the drawing board and we were talking about how we were gonna get a block,” said Turner. “That was the play we were looking forward to go get and this was the game to do it.”

After the game, Lone Star head coach Jeff Rayburn shared a special moment with his team as they hoisted the district championship trophy.

“Our team’s been preparing really well all year long,” said Rayburn. “This is a special team and a special group of kids. We started playing the game the right way and had a lot of success.”

For Rayburn, the scene was nothing new. With 19 playoff wins in eight years already under his belt, the most rewarding moment from Lone Star’s victory came with his son after the game.

“This is my first season here with my son Cade on the sidelines as a ball boy, so every moment we have together is special.”

The Rangers will take on the winner of the College Station and McKinney North game next Friday night as their playoff run continues.