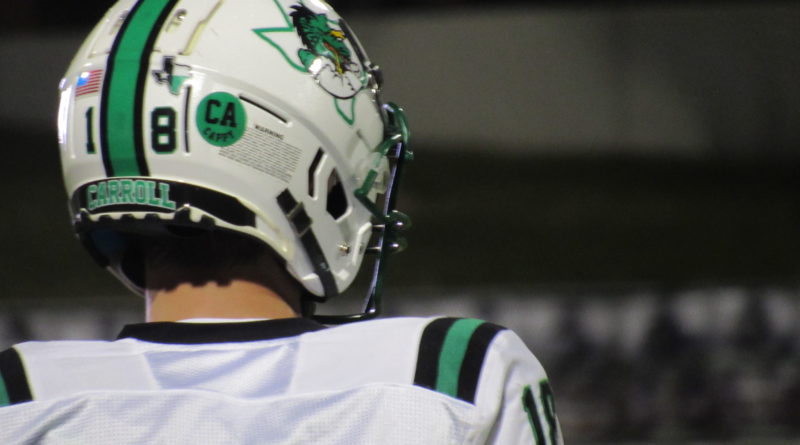 The postseason has finally arrived after teams around the slate slugged it out for district championships and playoff berths during the final weekend of regular-season action.

The 11th weekend of the Texas high school football season was defined by a number of ranked-versus-ranked matchups that shook up our statewide rankings with the bi-district round of the playoffs approaching.

Below are SBLive’s Texas Top 50 rankings for the week of Nov. 10. The rankings are compiled by reporter Andrew McCulloch and will be released every week throughout the regular season.

An end-of-season edition of SBLive’s Texas Top 50 will be released after the state championship games Dec. 15-18.

South Oak Cliff checks in at 47th to become the latest team to make its season debut in SBLive’s Texas Top 50. The Bears blanked Dallas Jefferson in 71-0 victory in their regular-season finale last Friday to finish a perfect run through district play in District 6-5A DII. South Oak Cliff enters the playoffs riding a nine-game winning streak with one of the most complete teams in 5A after holding district opponents to 5.8 points per game defensively and scoring 61.0 points per contest offensively. Jersey Village was the biggest climber in this part of the rankings this week after blasting Cypress Creek 63-21 in Week 11 to finish the regular season unbeaten for the first time since 1991. The Falcons, who moved up five spots after debuting at 50th last week, own one of the state’s elite defenses in 6A with 21 interceptions and seven fumble recoveries in 10 games this fall. A trio of teams that also won to finish unbeaten runs to the postseason — Austin LBJ, Dripping Springs and Ennis — rose three spots each in this edition of our statewide rankings. Austin LBJ, the top 4A DI team in our rankings, clobbered Taylor 77-8 to move up to 43rd after joining Stephenville as the only 4A DI squads to enter the playoffs undefeated. Dripping Springs survived a road test against Georgetown with a 32-31 win to climb up to 42nd and claim the District 12-5A DI championship, while Ennis ascended to 41st after blanking Corsicana 48-0 to win the District 8-5A DII title. Montgomery and Texarkana Texas High also won in Week 11 to finish with perfect regular-season records. Montgomery moved up two spots after the Bears beat crosstown rival Montgomery Lake Creek 56-45, while Texas High stayed put at 49th following the Tigers’ 34-7 road win over Whitehouse. Frisco Lone Star and Smithson Valley tumbled 15 and 13 spots, respectively, in this week’s rankings after suffering their second losses of the season in de facto district championship games against other ranked teams in their regular-season finales. Lone Star lost a 7-6 defensive slugfest to Denton Ryan in a clash of elite 5A DI teams in the DFW, while Smithson Valley fell 20-6 at home to Cibolo Steele in a battle between 6A San Antonio powers. Edinburg Vela, meanwhile, dropped one spot this week following a bye during Week 11.

Three teams — Alvin Shadow Creek, Lewisville and San Antonio Johnson — each moved up four spots to become the biggest climbers in this portion of our statewide rankings. Johnson shot up to 33rd after finishing a perfect regular season with a 31-21 win over San Antonio Clark, and now enters the postseason as one of three undefeated San Antonio-area teams. Shadow Creek crushed Alief Hastings 37-0 for the teams eighth straight win heading into the postseason as the Sharks also claimed the District 23-6A championship. Lewisville, meanwhile, won a wild Week 11 showdown against Carrollton Hebron with the Farmers sealing a 37-35 victory on a Hail Mary pass as time expired to clinch a share of the District 6-6A title. Houston C.E. King and Katy Paetow both moved back inside the top 40 after big Week 11 wins to end the regular season. King moved up a spot after clobbering Humble 49-0 for its second straight district win heading into the postseason. Paetow pounded Angleton 55-13 in a rebound game to secure their share of the District 10-5A DI title to move the Panthers up three spots in this week’s rankings. One of Paetow’s co-district champs, Manvel, moved up two spots following a 62-0 road victory over Houston Milby to help the Mavs enter the playoffs on a five-game winning streak. District 24-6A foes Dickinson and League City Clear Falls climbed one and two spots, respectively, after decisive victories to close out the regular season. Dickinson crushed Clear Lake 55-14 to extend its winning streak to seven games, while Clear Falls beat Clute Brazoswood 44-0 for its third consecutive victory with seven points or less allowed defensively. Austin Vandegrift and Lucas Lovejoy fell 10 and seven spots to 35th and 36th, respectively, after both teams suffered their first losses in games with outright district titles on the line. Lovejoy came up short in a back-and-forth game against junior quarterback Keldric Luster and Frisco Liberty 27-24. Vandegrift, meanwhile, lost its regular-season finale to Round Rock 38-20 to split the District 25-6A title.

Carthage and Fort Bend Ridge Point each climbed two spots to move inside the top 30 this week. Carthage, the highest-ranked 4A team all season, moved up to 30th, the Bulldogs’ highest ranking of the year, after shutting down Shepherd in a 56-0 win to retake the District 10-4A DII title. Ridge Point, meanwhile, won a decisive Week 11 game against Fort Bend Travis 31-17 to claim the program’s sixth district championship in the last eight seasons. Three teams in this part of our rankings — Arlington Martin, Garland and Katy Tompkins — each moved up three spots this week following significant victories to close out district play. Garland completed an undefeated regular season by thrashing South Garland 70-14 for the outright District 9-6A title, and the Owls have outscored their opponents by 36.4 points per game in 10 wins this fall. Martin, meanwhile, won the District 8-6A title with a 50-0 victory against Arlington Sam Houston to complete a perfect run through district play. Tompkins torched District 19-6A rival Katy Mayde Creek 72-7 in its final regular-season game to claim the district’s top seed in the 6A DI playoffs. Midland Legacy — the top-ranked West Texas team in SBLive’s Texas Top 50 — moved up one spot after a decisive 34-21 rivalry-game win over Odessa Permian to take the District 2-6A title, while Lake Travis stumbled in a lopsided 63-21 loss to crosstown rival Austin Westlake in the de facto District 26-6A championship game to drop 11 spots in this edition of our statewide rankings. Spring, Allen and DeSoto all held steady at 21st, 22nd and 24th, respectively after Week 11 wins against Aldine MacArthur (65-13), Denton Braswell (53-28) and Waxahachie (31-25). Allen finished with a share of the District 5-6A title, while DeSoto and Spring ended the regular season in second place in District 11-6A and 14-6A, respectively.

Cibolo Steele enters the playoffs undefeated and on the heels of perhaps the state’s biggest Week 11 win. The Knights took down one-loss Smithson Valley 20-6 on the road in the de facto District 27-6A championship game to skyrocket up eight spots in this week’s rankings following their signature win. Steele, which boasts one the best defenses in 6A allowing only 11.8 points per game, joins San Antonio Brennan and Converse Judson as the only Alamo City squads to crack our top 20 this season. College Station was the other team in this part of the rankings to earn a signature Week 11 victory with a 41-20 road win over Magnolia West in a clash of unbeaten teams for the District 8-5A DI title. The Cougars, who moved up two spots to become the third-highest ranked 5A team in SBLive’s Texas Top 50, have been one of the state’s most well-rounded and dangerous squads this season after outscoring their opponents 539-64 throughout the regular season. Aledo, the defending 5A DII state champion, enters the postseason unbeaten again after clobbering Cleburne 77-7 in its final district game to move up two spots to 11th, its highest rankings of the season. The Bearcats have been virtually unstoppable on offense this season averaging 55.0 points per game backed up by a talented defense loaded with DI prospects. Cypress Park climbed three spots this week to a season-high No. 14 ranking after the Tigers took the District 16-6A championship with a dominant 63-21 win over Langham Creek. Cy Park’s district rival, Cypress Bridgeland, beat Cypress Falls 38-10 for the Bears’ third straight win since the return of senior quarterback and Texas A&M commit Conner Weigman. Bridgeland leapfrogged Highland Park this week as the teams rose and fell by a spot, respectively, after the Scots took down Wylie East 38-20 in their final regular-season game. Euless Trinity moved up one spot after a 49-8 road win against Fort Worth Paschal to wrap up a perfect run through District 3-6A competition. Rockwall and Fort Bend Marshall, meanwhile, each dropped one spot following Week 11 wins. Rockwall beat North Mesquite 49-13 as senior quarterback and Mississippi State commit Braedyn Locke moved into third place in Class 6A Texas high school football history for career passing yards. Marshall manhandled Houston Madison 56-0 for the Buffaloes’ sixth shutout win in their last seven District 11-5A DII games. Humble Atascocita remained in place at 15th following a 37-7 victory over Beaumont West Brook to finish in second place in District 21-6A.

Austin Westlake proved why it’s been the state’s top-ranked team all season with a resounding 63-21 victory over rival Lake Travis. In senior quarterback and Clemson commit Cade Klubnik’s return from injury, the Chaparrals — who moved up to No. 2 in SBLive’s Power 25 national rankings this week — showed they’re primed for a run to a third straight state championship in Class 6A. The remainder of the top seven teams in SBLive’s Texas Top 50 remained in their most recent positions. Katy, Southlake Carroll and Spring Westfield completed unbeaten regular seasons and claimed outright district titles with their Week 11 victories against Katy Morton Ranch (66-15), Keller Fossil Ridge (62-14) and Aldine Eisenhower (63-14). Duncanville won its ninth straight game and stayed perfect against Texas teams this fall with a 76-0 win over Waco in its regular-season finale, while Denton Guyer and Galena Park North Shore enjoyed byes in the lead up to the first round of the playoffs. Rockwall Heath earned a spot in the top 10 for the second straight week after the Hawks cruised to a 56-13 road victory against Dallas Skyline to secure the outright District 10-6A title. Denton Ryan, the reigning 5A DI state champion, grinded out a tough 7-6 road win against Frisco Lone Star in the de facto District 5-5A DI championship game and a battle between ranked teams that ended as one of the best defensive duels around the state this fall. San Antonio Brennan, the Alamo City’s top-ranked team in our statewide rankings, dropped one spot after the Bears locked up the outright District 29-6A championship with a 56-23 win over one-loss San Antonio Marshall.