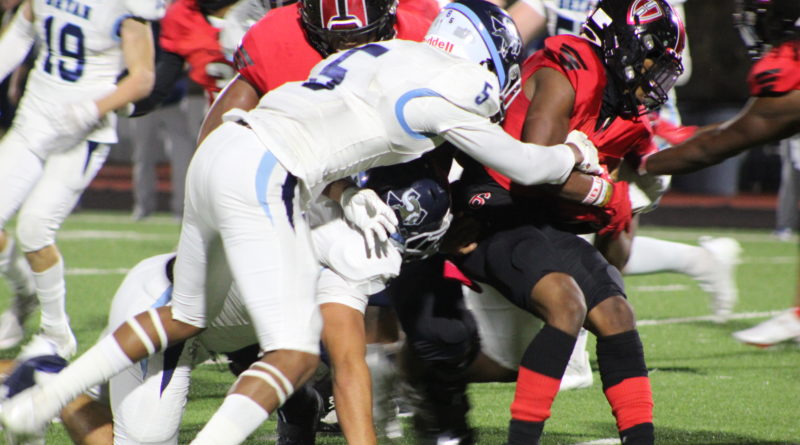 KILLEEN, Texas — With another slim lead in jeopardy of slipping away, Killeen Harker Heights’ defense broke the huddle on the home sideline and prepared for the biggest play so far against Bryan.

The Vikings, who trailed by a touchdown and faced a 4th and long with no timeouts and less than 2 minutes to play, dropped back and fired a Hail Mary pass deep downfield.

But Knights senior defensive back R’jai Rogers hauled in Bryan’s desperation heave for a game-winning interception that capped a fourth-quarter surge and sealed a 28-24 comeback victory for Harker Heights over the Vikings in their regular-season finale Thursday night at Leo Buckley Stadium.

“Coach (Jerry Edwards) told us this was going to be a hard game and we knew that coming in. For them to jump out on us, we don’t get discouraged,” Harker Heights junior running back Re’Shaun Sanford said. “We’ve got a lot of heart, determination and fight. That’s what we live for. It’s what Coach preaches to us and that’s what we preach as well. … We never gave up, came through and won the game.”

“It means a lot,” Knights’ junior left tackle Jaydon Chatman said. “They came out pretty hot, but we started to pick it up and made sure we won.”

Harker Heights entered the final frame trailing 24-14, the largest deficit either team faced all night, after being held scoreless during the third quarter, but quickly turned the tables.

Sanford — the state’s leading rusher through Week 10 with 2,057 yards on the ground — caught fire at the start of the fourth quarter.

The Knights’ workhorse back gobbled up yardage as his offensive line set the table and the team’s offense marched downfield.

Sanford pushed Harker Heights into the end zone on a 3-yard touchdown run, his second rushing score of the game, to cut Bryan’s lead to 24-21 with 7:58 left to play.

On the team’s next offensive possession, the Knights again drove inside the red zone and reclaimed a 28-24 lead late on a 14-yard bullet pass from sophomore quarterback Dylan Plake to senior running back Aimeer Washington with 3 minutes to go during the fourth quarter.

“Once we catch a little bit of momentum, it’s really hard to stop us. We got our offense rolling and we’ve got enough playmakers to get it done,” Sanford said. “This is the best defense in the district, so for us to be able to compete with them is really good coming in (to the postseason) because now we know what the competition is going to be like. We’re not going to take it light, so we’ve got to come in ready.”

The Knights weathered shots from the Vikings, however, all night during a District 12-6A game with a playoff-like intensity and atmosphere from the opening kickoff.

Bryan, which entered riding a four-game winning streak after an 0-5 start to the season, overcame a sluggish start by scoring in bunches during the second and third quarters.

After Sanford scored his first of two rushing touchdowns for the Knights on their first offensive possession of the game, the Vikings got to work on the ground too.

Sophomore quarterback Tate Allen led the charge for a relentless Bryan rushing attack that helped the teams exchange leads three times and tie it up twice before the final whistle.

Senior running back Du’wayne Paulhill pounded in Bryan’s first touchdown on a scoring run from the goal line on fourth down. An interception and additional fourth-down conversion on the next drive set up a 48-yard touchdown pass from Allen to senior receiver Hunter Vivaldi to push Bryan in front 14-7 with 41 seconds until halftime.

“It was really, ‘Pick it up because we’ve got to start rolling. If we don’t start picking it up, we’re not going to win this one,'” Chatman said of the team’s halftime message. “Being able to go back and forth with a good team really brought the energy back up for us.”

The Knights’ balance offensively, though, kept them poised to launch a crunch-time comeback.

The team’s offense foreshadowed what was to come when Harker Heights drove the length of the field to score a game-tying touchdown on a 6-yard pass to senior wide receiver Marcus Maple with a second left during the second quarter.

The Knights fell behind again after Bryan added a field goal and capitalized on a third-quarter interception with an Allen touchdown run, but were able to claw back into the game because of their balance on offense provided by Chatman and the offensive line’s physical play upfront.

“We just kept talking and communicating with each other and motivating each other as an offensive line,” Chatman said. “Mixing it up a little bit really helped. We can always run the ball, but sometimes the pass really helps.”

“When our offensive line gets it done upfront too, that’s bad news,” Sanford said. “I love my guys, man. They come in to practice every week and get the job done. They work really hard and for them to be doing what they’re doing now, I’m very proud of them. I couldn’t do it without them, so I thank them for that as well.”

The loss snapped a four-game winning streak for Bryan and dropped the Vikings to 4-6 overall this fall and 4-3 against District 12-6A competition.

Bryan finishes the regular season in fourth place in 12-6A and will take the district’s second seed heading into the bi-district round of the 6A DII playoffs, where the Vikings will face the Cedar Hill Longhorns (6-4, 5-2) at 7 p.m. Thursday at a to-be-determined site.

The victory vaults Harker Heights to 9-1 overall and 6-1 in district play after a 1-9 finish two years ago.

The Knights, who enter the postseason riding a five-game winning streak, have claimed 12-6A’s top seed heading into the 6A DI playoffs where they will face the DeSoto Eagles (8-2, 6-1) — ranked 24th in SBLive’s Texas Top 50 statewide rankings — in the bi-district round at 7:30 p.m. Friday at Baylor’s McLane Stadium in Waco.

“We can’t get discouraged,” Sanford said. “We have to come in with that mentality that we want to win in the playoffs. We can’t be satisfied with just making it at this point. We’ve had a good season, but we’re just getting started.”