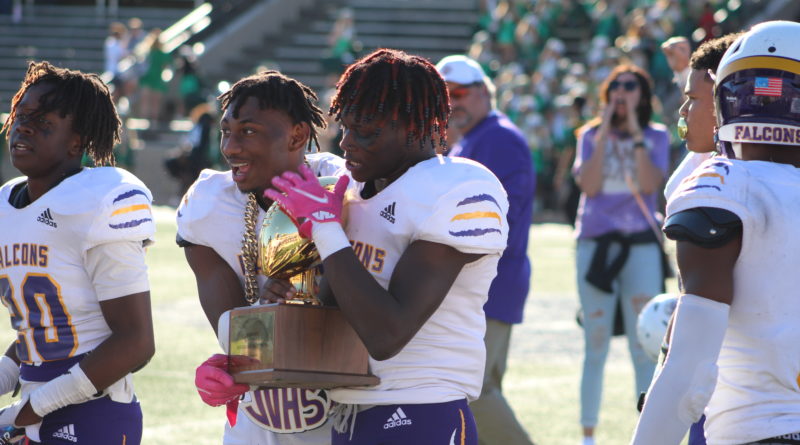 HOUSTON, Texas — With precious seconds ticking away and the district title hanging in the balance, the Houston Stratford’s offense took the field for its final possession of the afternoon.

The Spartans, who trailed Jersey Village 28-21 late in the fourth quarter, faced a daunting 55-yard march to the end zone with 23 seconds left on the clock and no timeouts remaining.

On the third play of the drive, Stratford rocketed a Hail Mary heave toward the goal line that was bobbled before being picked off by Jersey Village junior defensive back Darius Johnson at the Falcons’ 8-yard line with 2 seconds left.

Johnson’s clutch interception, his second of the game, served as the exclamation-point finish to a dominant defensive performance that included five takeaways and propelled Jersey Village to a 28-21 road win over Stratford on Saturday afternoon at Tully Stadium.

The Falcons handed the Spartans their first loss of the year while also remaining undefeated and clinching the District 17-6A championship with the win.

“It feels amazing, and so does the fact that we worked so hard to get here from the end of last season to now,” Johnson said. “This is what we’ve been waiting for all season, and now, we’re here.”

“We’ve been working really hard since the summer,” junior receiver and running back Arbrie Carter said. “We’ve been training and working hard, putting in the work every single day to get here.”

The Falcons brought their A-game defensively and prevented Stratford from consistently sustaining drives with a combination of hard hitting, ball-hawking pass coverage and a relentless pash rush.

Jersey Village pried the ball away from the Spartans’ offense five times with a forced fumble and four interceptions.

The Falcons forced and recovered the first fumble of the game late in the first quarter at Stratford’s 49-yard line, which directly led to the first points of the game on a rushing touchdown shortly thereafter.

Johnson’s first pick of the afternoon, a toe-tapping grab in the back of the end zone, kept the Spartans out of the end zone and scoreless midway through the second quarter.

Junior cornerback Chris Noble pulled down the Falcons’ third interception of the game with the defense backed up into the red zone with less than 2 minutes to go in the second quarter. Noble’s pick denied Stratford’s offense another promising scoring chance and helped Jersey Village carry a 13-7 advantage into halftime.

The Falcons’ fourth takeaway was a one-handed interception that was fumbled into the end zone and recovered by the Spartans for a touchdown on the same play to help them trim their deficit to 28-21 with a little less than 8 minutes remaining in regulation.

Stratford also scored twice on goal-line touchdown runs up the middle by senior quarterback Nash Rankin, who also kept his team alive offensively with his accuracy as a passer and dexterity as a scrambler.

Jersey Village, however, was too strong at every level defensively and never allowed the Spartans to retake the lead or tie the game once the team had already moved ahead for good during the first quarter.

The Falcons racked up several sacks at critical points of the game, like senior defensive end Landen Suarez’s sack on third and long to force a punt on the Spartans penultimate possession of the contest.

Jersey Village’s defense stopped Stratford on downs multiple times too, including a goal-line stand during the early part of the fourth quarter that featured three consecutive goal-line tackles to stop the Spartans short of the end zone and a potential game-tying score.

He found the end zone three times on a trio of rushing touchdowns — the game’s only first-quarter score and two touchdowns on the ground during the third quarter — from inside the 10-yard line.

He also got into the end zone again after catching a two-point conversion pass following his second rushing score.

“We had to get that running mentality,” Carter said. “You’ve got to have the toughness to run the ball because you can’t just pass.”

Carter personally accounted for 20 points, nearly matching Stratford in points by himself, and received a significant boost from a Falcons’ offensive line that dictated the tempo upfront.

Fellow junior back Rashon Estes split carries with Carter out of the backfield and was responsible for the longest scoring play of the contest: a sprint to the end zone on the ground from midfield.

Sophomore quarterback Adam Tran was also effective through the air and as a calming presence for the Falcons’ offense, which did not commit any turnovers as a unit Saturday.

It’s a small example of the massive change Jersey Village has made this year, flipping a 6-6 finish last season into a 9-0 start this fall and securing the program’s first district title since 2018.

“It feels great, especially after beating a good team over there,” Carter said. “We play hard.”

Stratford (8-1, 5-1) will look to rebound on the road after having its eight-game winning streak snapped against Houston Northbrook (1-8, 0-6) in its Week 11 regular-season finale at 7 p.m. Friday at Tully Stadium in Houston.

The Spartans will finish the regular season in second place in the 17-6A district standings and will take the district’s top seed heading into the 6A DII playoffs in two weeks, where they will face either Houston Westbury or Houston Heights in their bi-district round matchup.

Jersey Village (9-0, 6-0), meanwhile, will have an opportunity to complete its first undefeated regular season on the gridiron in more than a decade when the team closes out district play at home against Cypress Creek (4-5, 3-3) at the same time Friday night at Ken Pridgeon Stadium in Houston.

“We’re just ready to do it again next week,” Johnson said. “Everybody thought we were going to lose this game and doubted us, but we came out on top. We’ve just got to come back again Monday and rework everything to beat Creek.”

The Falcons have also now staked their claim to 17-6A’s top seed heading into the 6A DI playoffs in two weeks, where they will likely face Houston Westside in the bi-district round.