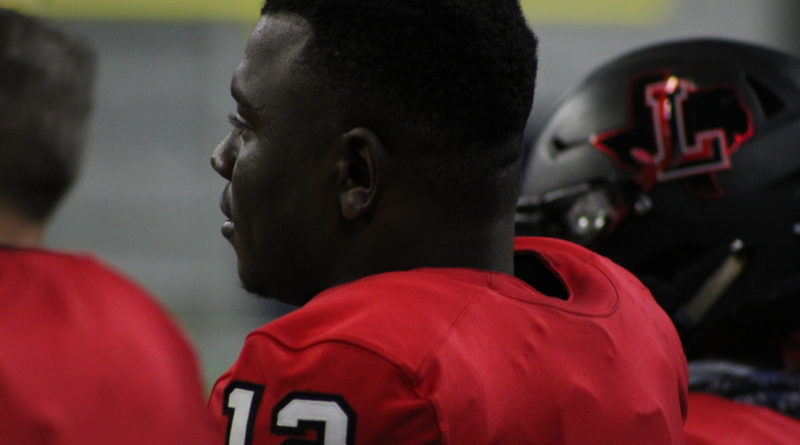 FRISCO, Texas – In a game with big play after big play, Frisco Liberty simply wanted it more, pulling out a 49-44 victory over Denison on Friday night.

With a defense that was absolutely being destroyed by Denison running back and Notre Dame commit Jadarian Price, Liberty decided to start bringing up the linebackers and the safeties in an attempt to force Denison to pass.

While not a perfect plan, it was good enough to get three consecutive stops, including slowing down Price, with some help from flags from the officials along the way. Down by 10 at halftime, the strategy helped Frisco Liberty outscore the Yellow Jackets 35-20 in the second half.

Two second half touchdowns were called back against Denison, both for holding. The first was a screen to Price, who scored what appeared to be his fourth touchdown of the evening, but alas, the yellow cloth on the ground.

The other came by way of an interception by Denison free safety Kenyan Kelly, who returned the interception for a touchdown. That second flag came back to haunt Denison again.

By the next time the Yellow Jackets found the end zone, it was the late fourth quarter and they were now trailing 49-44, which ended up being the final score.

To reach that major turnaround, two things happened: First, the aggressive defense by Liberty, as mentioned above; and there was just no stopping Redhawks quarterback Keldric Luster.

The dual-threat signal caller had numerous long passes and runs, and ended up with a remarkable 430 yards passing and six touchdowns and 214 yards rushing and a TD on the ground. From just two plays, Luster accounted for 160 yards – an 81-yard run where he actually fumbled the football through the end zone for a touchback, as well as an 80-yard touchdown pass.

Most importantly, Luster ran with power. The 5-foot-11, 200-pound quarterback played more like a 1980s Southwest Conference I-Back in terms of running downhill and using a stiff arm to fend off defensive players from Denison. He was the player of the game, and that’s saying something considering the show that Price put on.

There’s a reason teams kick away from Price, especially after returning a kickoff 106 yards for a score just two weeks ago. He’s a pure blazer when he hits the gas. The national recruit did not have the angle on several runs, yet often beat the opponent to the hole and then simply out ran everyone else.

Counting the called back screen pass, Price had three separate plays where he went for 50 yards or more. His first step takes him from a basic jog into almost top speed. In short, Price’s burst was incredible. It’s just that he did not receive enough help from the passing game.

Too many times the Liberty defense did not play a sound defense with all of the run-pass option plays that Denison would run, but the Yellow Jackets were out of sync with the passing attack.

That’s especially true from the middle of the third quarter forward, when Liberty scored 22 consecutive points to take a commanding 49-44 lead that it would never relinquish.

The victory for Liberty puts them at 8-1 on the year, while Denison fell to 5-3.