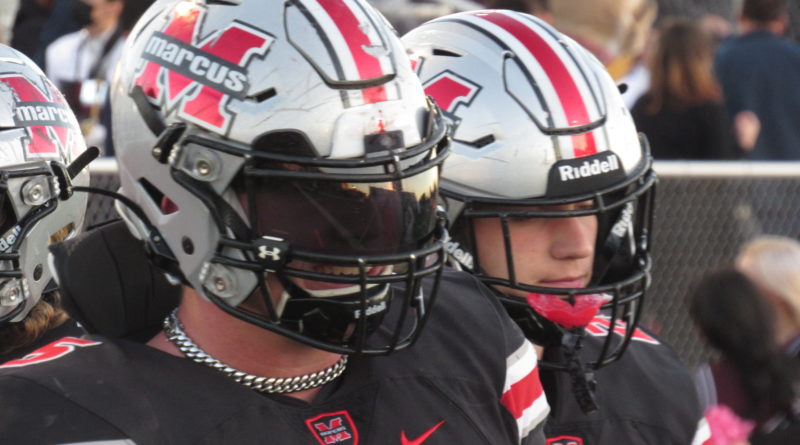 FLOWER MOUND, Texas – Jaxxon Warren threw three touchdown passes and Walker Wells rushed for 133 yards to lift Flower Mound Marcus to a 40-27 victory over previously unbeaten Lewisville in the Battle of the Axe on Friday night.

In a closely contested first half, Flower Mound went into the locker room with a narrow 13-10 lead. The second half was a different story, however.

After Lewisville tied the game at 13-13 on a field goal, Flower Mound’s offense began to click. The Marauders scored 20 unanswered points behind strong efforts from Warren, Wells and wide receiver Dallas Dudley.

“We felt really good about our plan going in at halftime,” said offensive coordinator Tim Morson. “Our kids were just able to execute. We knew we could run the ball, and we felt really comfortable about the way we were playing up front.”

Warren finished 17-of-25 for 211 yards and the three TDs. Wells, who scored a second-half touchdown to put the Marauders up 33-13, spoke about the resilience of the offensive unit to open the second half of play.

“We just kept on pushing,” said Wells. “We gotta keep on pushing no matter what. Big thanks to the O-line, couldn’t have done it without them.”

Dudley posted a productive half as well, ending the game with 77 receiving yards and a late touchdown. Instead of crediting himself for a standout performance, Dudley emphasized the efforts of the team.

“I think this is a team win overall,” he said. “Them being undefeated didn’t really mean anything to us. We just had to stay patient, play our game, play the Marauder way and that’s just what we did.”

As the game ended and Flower Mound stormed the field hoisting an axe in tradition, Morson put things into perspective for any fan of the game.

“It’s about loving kids,” he said. “We love them. We’re proud of them, buying in and playing the way they did gives me chills, so it’s awesome. We just love our kids and give them a hug and tell them congratulations. So I’m gonna go get on that axe.”

Flower Mound will close out their regular season next Thursday against the 2-7 Plano East Panthers, while Lewisville will host Hebron on Friday.