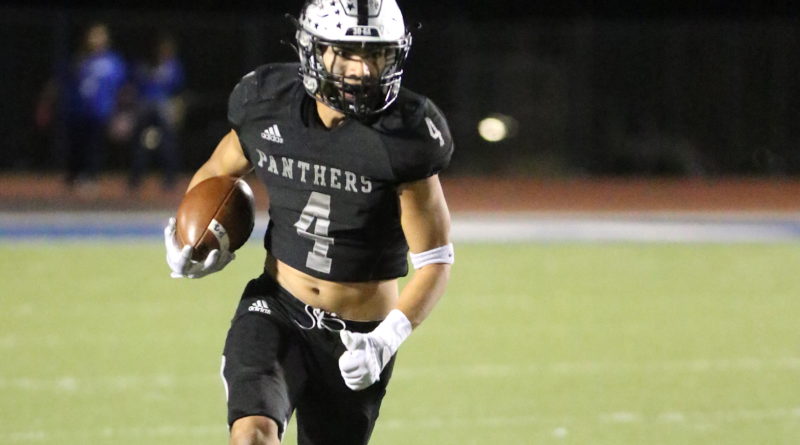 Benavides has been the work horse for the Panthers all season and he made his presence felt from the opening drive, scoring on a 21-yard touchdown run with 8:07 left in the first quarter to give the Panthers a 7-0 lead.

Laredo United South’s “TNT” defense did not allow Del Rio’s big playmaker – quarterback Zachary Taylor – to get loose. Taylor is known for his incredible speed and scrambling ability, and the Panthers were able to contain him on the ground and through the air.

Benavides tacked on his second touchdown on a 20-yard run with three minutes left in the opening quarter to make it a 14-0 game.

The Panthers went to the air on their next drive as quarterback Luis Cisneros found a wide-open Javier Rodriguez for a 52-yard touchdown with 28 seconds left in the quarter. Christian Gonzalez booted in the extra point to give Laredo United South a 21-0 lead.

The halftime homecoming festivities did little to slow down the Panthers as they opened the second half with a fumble recovery by junior defensive lineman Jose Garza that led to another another scoring drive.

Garza scored his second touchdown of the night, a 6-yard TD reception, to make it 42-0 with 7:41 left in the third quarter.

Del Rio finally got on the board when Taylor threw a 4-yard touchdown pass with 6:50 left in the game.

Del Rio freshman running back Zane Huge had a big play in the fourth quarter, breaking free for a 65-yard run. But Del Rio fumbled the ball inside the 5-yard line and senior defensive lineman Julio Arevalo recovered the fumble.

Laredo United South will play Laredo LBJ in their final game of the season next Friday.