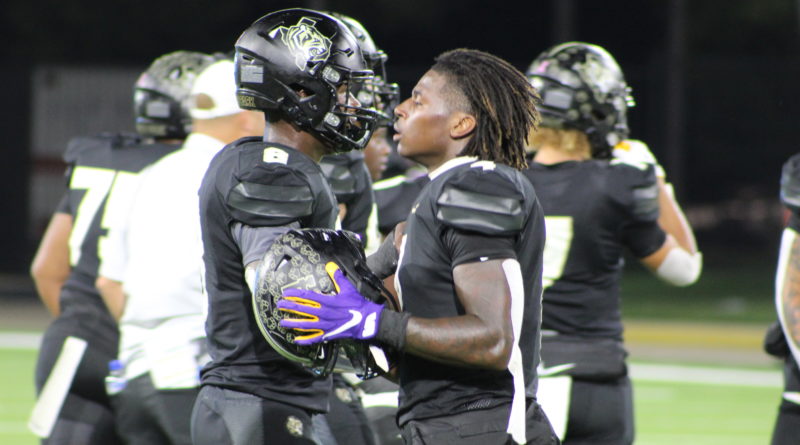 CYPRESS, Texas — Cypress Park senior Harold Perkins has been one of the state’s most dominant two-way playmakers this season and will remain one of the most sought after prospects throughout Texas high school football for the foreseeable.

Perkins, a third-year varsity starter for the Tigers, has been a major force on both sides of the ball as a running back, wide receiver and linebacker.

His senior campaign has begun with a bang offensively after rushing for 787 yards and 13 touchdowns on 44 carries and snagging six receptions for 145 yards and three scores through the air. Perkins has also tallied 12 tackles, three TFLs, a pair of sacks defensively and a fumble recovery in Cy Park’s first seven games this fall.

He had one of his best overall performances in the Tigers’ dominant 35-13 Week 8 victory over Cypress Bridgeland after catching a 57-yard touchdown pass on the opening drive of the game as well as hauling in his first interception and forcing his first fumble of the season.

After his big game against Bridgeland to help Cy Park stay undefeated, he told SBLive Texas that he’s doing his best to tune out distractions on the recruiting trail during his team’s pursuit of district and state championships with the 6A playoffs approaching.

“I was talking to my people about that and I was like, ‘Dang, to really grow up watching videos of stuff like that until now (when) I’m getting it, it’s crazy,’” said Perkins, who wore LSU gloves during his team’s Week 8 win.

Cy Park’s star senior will instead wait to announce his verbal commitment until the Under Armour High School All-American game in January in Orlando, Florida.

Perkins received his All-American jersey Friday during a pep rally at his high school.

“I was talking to my people about that and I was like, ‘Dang, to really grow up watching videos of stuff like that until now (when) I’m getting it, it’s crazy,’” he said.

Perkins visited LSU, Texas and Texas A&M twice on summer recruiting trips and has since taken an official visit to Florida to watch the Gators’ Sept. 18 home game against Alabama. He is set to travel to Oregon for another official recruiting visit to watch the Ducks host Colorado.

Thompson — who had previously named his top three that included Oklahoma State, Texas and Texas A&M in late August — announced his commitment to Texas during an Oct. 6 ceremony at his high school after receiving 36 offers from DI programs.

He becomes the top-ranked prospect to commit to the Longhorns among their 22-member recruiting class.

Thompson, a four-star recruit, is ranked by 247 Sports as both a top 25 wide receiver nationally and a top 25 senior in the state of Texas.

He entered this year as one of the Panhandle’s top receiving targets, but his season ended prematurely after sustaining a season-ending injury in September.

Thompson helped lead the Bulldogs to an 11-2 record in 2020 and earned a first team all-state nod from the Texas Sports Writers Association as an all-purpose player in Class 3A.

He also won an individual state title in 100-meter dash and took second place in the 200 last spring at the 3A state track and field championships.

He previously took recruiting visits to College Station and Los Angeles in early and mid-June, respectively.

Marshall has made an enormous splash on the recruiting trail since picking up a football for the first time as a junior last year. His breakout 2020 season for the Buffaloes featured 45 catches for 1,009 receiving yards and 18 touchdowns.

The 6-foot-4 wideout has followed that up with an incredible senior campaign this fall by hauling in 13 receptions for 454 yards and 11 TDs through the air in six games this fall.

Marshall, a four-star prospect, is regarded by 247 Sports as a top 20 overall player throughout Texas and a top 15 receiver nationally in the Class of 2022.

Denton Guyer quarterback Jackson Arnold has been tearing it up during his first season as the program’s starter under center.

After backing up current Texas A&M QB Eli Stowers as a freshman and sophomore, Arnold has taken the reins of the Wildcats’ offense and it’s beginning to pay dividends for the junior gunslinger on the recruiting trail.

Guyer’s starting quarterback has garnered five offers since the 2021 season began, including a pair from Baylor and SMU in late September. More recently, though, he picked up three additional DI scholarship offers within five days last week.

Then the Wildcats’ signal caller earned an offer from Cincinnati last Friday before his team’s 38-31 loss to Allen and another offer Saturday from Ohio State, his first from a Big Ten school since Michigan State extended him his first DI offer in late March.

Arnold, a four-star recruit, has been ranked one of the top 25 juniors in Texas high school football and a top 10 QB prospect nationally in the Class of 2023 by 247 Sports.

That flurry of activity on the recruiting trail gives him 16 offers from FBS programs overall after he completed 169 of 261 passes for 1,970 yards and 16 passing touchdowns in his team’s first eight games this season.

Arnold’s teammate, junior safety Ryan Yaites, also made recruiting headlines when he secured an official offer from Oregon on Thursday.

The offer from Oregon represents his fourth from a Power Five program since the season began after adding offers from Auburn and Missouri in late August and Texas Tech in late September.

Yaites, a four-star prospect, has been rated a top 20 safety prospect nationally and a top 35 Class of 2023 player in Texas high school football. He currently holds offers from 17 DI college programs.

Amarillo Tascosa senior running back Major Everhart, one of the Panhandle’s top offensive playmakers, announced his verbal commitment to TCU two weeks ago.

The Rebels’ top rusher revealed his decision after taking an official recruiting visit to Fort Worth in mid-June before also visiting Baylor, Notre Dame and Texas Tech. He had collected 18 offers from DI programs before publicly acknowledging his commitment to TCU.

Everhart, a three-star recruit, has been considered a top 70 player within Texas and a top 45 running back prospect nationally in the Class of 2022 by 247 Sports.

He has run for 675 yards and nine touchdowns on 38 carries eight games into his senior season and has tacked on 248 yards and two TDs through the air on nine receptions. He was also honored with back-to-back first team all-district selections as a sophomore and junior.

Everhart and the 45th-ranked Rebels (7-1, 4-0) will search for their seventh straight win against Lubbock Monterey (3-4, 1-2) in District 2-5A DI competition at 7 p.m. tonight at Lowrey Field at PlainsCapital Park in Lubbock.

Houston Yates senior wide receiver Randy Masters — a top-tier pass-catcher in Class 4A and one of the state’s top-rated uncommitted wideouts — made his college choice by verbally committing to UNLV on Wednesday.

He has earned offers from 21 different DI programs, including 15 Power Five teams, but sided with the Rebels after taking his first official visit to Las Vegas last weekend to watch UNLV’s game against Utah State.

He also took unofficial official recruiting visits to Ohio State and Tennessee in 2020.

The Rebels gained steam late in the recruiting process with Masters after officially offering the 6-foot-1 receiver on Oct. 11 and watching him live in Houston. He previously decommitted from Baylor in October 2020 and again from Cincinnati in January.

Masters, a three-star recruit, has been ranked by 247 Sports as one of the top 150 seniors in Texas high school football and a top 100 receiver prospect nationally.

He burst onto the scene as a sophomore catching 20 passes for 356 receiving yards and five touchdowns at Alvin Shadow Creek to help lead the Sharks to a 16-0 record and 5A DI state championship.

He snagged six catches for 112 yards and a receiving touchdown in the Lions’ last game, a 27-19 home loss to Houston Furr.

The Knights’ 6-foot-4 O-lineman started the 2021 season without a single DI scholarship offer, but has since garnered official offers from half the Big 12.

The Houston Cougars became the latest team to extend him an offer Wednesday, but Chatman made waves on the recruiting trail when he earned offers from teams on both sides of the Bedlam Rivalry.

Oklahoma State arrived first and became the fourth Big 12 program to formally extend him an offer on Oct. 8 after Baylor, Texas and Texas Tech did so within a week of each other in late September.

Oklahoma was quick to respond with an official offer of its own Saturday while Chatman was on an official visit in Norman to watch the Sooners beat TCU.

He also took recruiting trips to Waco in mid-September to watch the Bears take down Texas State and Austin in late September, when he was offered by Texas while watching the Longhorns shutout Rice.

Chatman, a three-star prospect, is considered a top 20 interior O-line recruit nationally in the Class of 2023 and one of the top 50 juniors in Texas high school football by 247 Sports.

He has been one of the main table setters on the offensive line for the Knights’ record-breaking rushing attack that has tallied 1,917 yards and 23 touchdowns on the ground off 238 carries in six games this fall.

His top six, which he revealed on Twitter on Monday, featured Alabama, Miami, Oklahoma, TCU, Texas and Texas A&M.

Cozart, a four-star prospect, has been tabbed a top 50 wide receiver prospect nationally and a top 50 Class of 2023 player within the state of Texas by 247 Sports.

He held offers from 25 DI programs before narrowing it down to his final six potential collegiate homes.

Cozart drew his offers from the Aggies and Sooners in June before adding one from Alabama in late July.

Miami, which was the first program on the junior’s list of six finalists to extend him a scholarship offer in January, TCU and Texas have each been heavily recruiting Cozart since the end of his sophomore year.

He took recruiting visits earlier in the fall to Oklahoma to watch the Sooners host Nebraska to Dallas to watch the Longhorns duel OU at the Cotton Bowl.

The 6-foot-3 wide receiver has hauled in 28 catches for 567 yards and a team-high nine receiving touchdowns in seven games this season.

Cozart and Flower Mound Marcus (5-2, 3-1) hit the road to face Carrollton Hebron (4-3, 4-0) at 7 tonight at Hawk Stadium in a District 6-6A game with major playoff seeding ramifications.

The Bears’ 6-foot-6 tight end, who remains uncommitted, is also being recruited by Baylor and North Texas among others. He took recruiting trips to watch SMU host South Florida in early October and Texas host Oklahoma State last weekend too.

The junior has become a versatile part of Bridgeland’s offense with seven catches for 67 yards and a pair of receiving touchdowns. He has also stepped up recently as a blocker in the Bears’ running game.

Mikeska and No. 21 Cypress Bridgeland (5-2, 2-2) will look for a rebound performance against Cypress Springs (2-5, 1-3) at noon Saturday at Ken Pridgeon Stadium in Houston after back-to-back district losses.