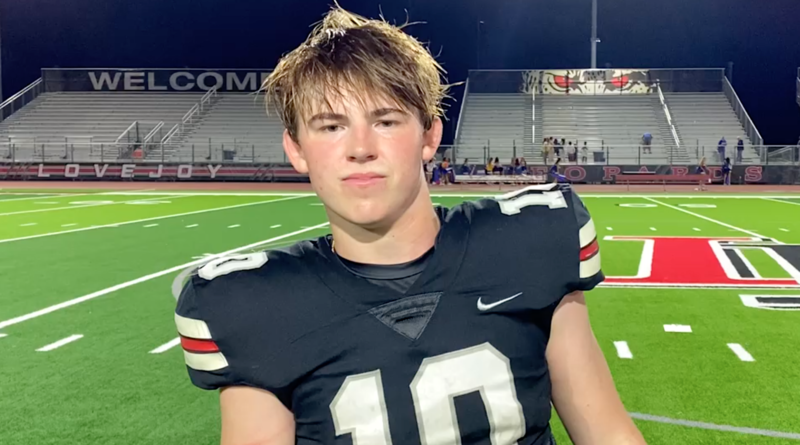 Both teams came into Friday’s matchup with identical 7-0 records and looking to build momentum with the playoffs just three weeks away.

Lovejoy (8-0, 6-0) started the game hot, scoring 17 unanswered points and forcing two turnovers with an early interception and a blocked punt.

For almost the entirety of the first half, Frisco was shut out and struggled to find success against Lovejoy’s defense.

“Coach Johns and our defensive staff have just done an incredible job,” Ross said. “Those guys are playing at a high level. To shut out an offensive team like Frisco, that’s a credit to coach Johnson and the preparation of these young men. I’m so proud of them.”

“When you play a team like Frisco, they run the Wing-T,” said Johns. “So the biggest thing playing a game like this is eye discipline. You don’t see this offense anymore and our coaches did a great job of taking the components of what these guys do.”

Frisco’s defense gave the offense a boost when senior cornerback Steve Margo nearly returned an interception for a touchdown late in the second quarter. They punched it in a few plays later to make it 17-7 at halftime.

That would turn out to be Frisco’s last points for a while, however.

Lovejoy came out of the locker room hot in the second half, scoring in less than 30 seconds on a 69-yard touchdown pass from sophomore quarterback Alexander Franklin to sophomore wide receiver Parker Livingstone.

The Leopards added on to their lead later in the third quarter on a 3-yard rushing touchdown from running back Noah Naidoo, who finished the game with 133 rushing yards on 5.8 yards per carry.

Franklin shined as well, passing for over 200 yards and four touchdowns on the day.

“We started off the game slow, but we knew we’d come back,” Franklin said after the game. “We just fought. O-line did great, receivers did great, defense, insane. We’re the best team in state.”

While the Leopards found success in virtually every aspect of the game, the same cannot be said for the Frisco Fighting Raccoons.

Outside of a late kick return by senior Aaron Jamison-Johnson, Frisco struggled to find any degree of success moving the football down the field.

With the playoffs soon approaching and Lovejoy looking to maintain their perfect record, coach Ross reiterated the importance of taking things one game at a time.

“Every game is big, there’s no tournaments in football and there’s no two out of three’s,” Ross said. “We try to keep it all focused on just the next week, this week, 1-0. ‘Big games’, we don’t do that. They’re just the next one.”

Lovejoy will close out their season with games against Lebanon Trail (1-7) and Liberty (7-1).