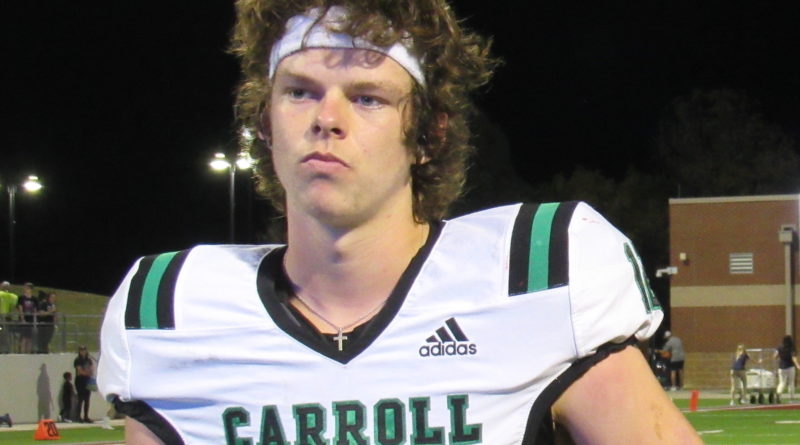 FORT WORTH, Texas – Kaden Anderson threw two touchdown passes and ran for two more to lead Southlake Carroll to a 47-24 win over Eaton in a key District 4-6A matchup Thursday night.

Carroll (8-0, 4-0) opened the game strong, scoring 21 unanswered points behind a dominant run game and the efforts of Anderson, their junior quarterback.

“This was a big win for us,” said Anderson. “This was our district championship. We were both undefeated in district coming into this game. I think it was a fun game, it was a great game.”

From start to finish the Dragons maintained clear control of the matchup, leading the Eagles by as many as 35 points. Owen Allen was dominant on the ground, scoring three rushing touchdowns for Carroll.

Carroll head coach Riley Dodge spoke about his team’s dominant effort, crediting both sides of the ball for their standout performance.

“It was just kind of a complete team effort, complementary football,” he said. “Offense was scoring, defense getting stops and feeding off that energy.

With the playoffs on the horizon and an undefeated record to maintain, Dodge emphasized that there was still room to improve for his roster.

“We’re playing good football,” said Dodge. “I still don’t think we’ve played our most complete game yet so we’re gonna continue to strive for that.”

The Dragons will play two more than favorable games against Timber Creek (3-5) and Fossil Ridge (2-5) to close out their season before the state playoffs start.

As for Eaton, their season is far from over. Even with the loss to Carroll, they remain in second place in District 4-6A with an overall record of 7-2 and a district record of 4-1.

The Eagles will play one more game against Timber Creek to close out their regular season as they prepare to bounce back in the tournament.

State playoffs will begin the week of Nov. 11, where Eaton and Carroll may very well run into each other again.