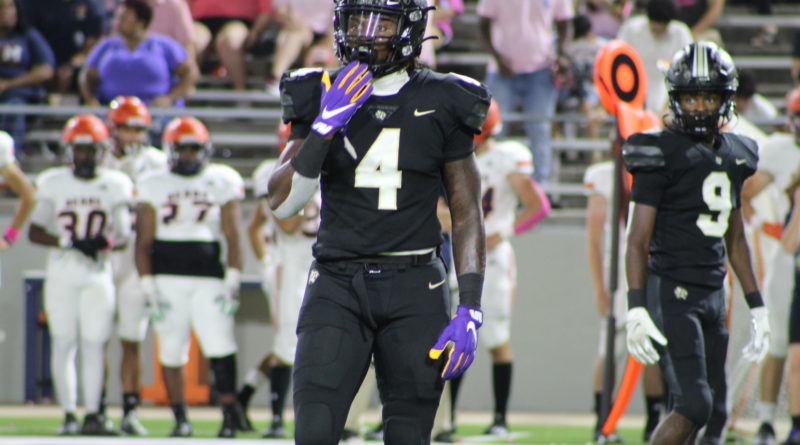 CYPRESS, Texas — Five-star senior Harold Perkins handed in one of the most complete performances of his career in one of his team’s biggest games of the season.

Perkins, one of the top two-way players throughout Texas high school football, sparked a hot start for Cypress Park offensively with a runaway touchdown and slammed the door shut defensively by forcing a late turnover.

His monster night helped the Tigers, the 19th-ranked team in SBLive’s Texas Top 50, take down No. 15 Cypress Bridgeland 35-13 for the first time in program history in a pivotal District 16-6A matchup to preserve their perfect record Friday at Cy-Fair FCU Stadium.

“It feels good,” Perkins said. “Last year when we played them, we got blown out. But we knew this year that we had the better team.”

Here are five key takeaways from the Tigers’ victory over the Bears:

PHOTOS: Cy Park powers past Bridgeland to stay perfect in 16-6A

Perkins, the top-ranked Class of 2022 linebacker prospect nationally according to 247 Sports Composite recruiting rankings, started the game off with a bang offensively.

On the opening drive, he lined up out wide as a receiver and slipped past Bridgeland’s secondary to haul in a 57-yard walk-in touchdown pass from senior quarterback Edward Dixon.

“We knew they were playing man the whole game,” he said. “I feel like I’m the best player on the field in whatever situation, so I just do what Coach (Greg Rogers) tells me to. Coach was like, ‘We’re going to take a shot early,’ and when I lined up I was surprised because they didn’t even cover me. They just left me open so it was an easy touchdown.”

That score put the Tigers on top 7-0 only a minute and 39 seconds into the contest, and the first of two successful onside kicks set Cy Park up again with excellent field position right after the team’s first score.

The Tigers capitalized, as Luis Angel Ayala drilled a 26-yard field goal to move ahead 10-0 with 5:11 left during the first quarter.

King found the end zone twice, beginning with a 43-yard touchdown reception from Dixon with 48 seconds left during the first half. He scored again on a 34-yard scamper with 8:08 remaining in the third quarter.

Livingston, meanwhile, snagged a 29-yard touchdown pass from Dixon for the first of two third-quarter scores within 44 seconds and then ran in a two-point conversion attempt out of a wildcat formation after King’s rushing touchdown.

Perkins finished with 81 receiving yards and a touchdown on three catches and 25 rushing yards on six carries.

King racked up team highs in rushing (61) and receiving yards (77) as well as two touchdowns on 12 total touches, while Livingston ran 13 times for 42 yards and caught three passes for 81 yards and a score.

Dixon ended the night with 238 passing yards and three touchdown throws on 10-of-21 passing, as the Tigers amassed 422 total yards offensively.

In a game where both defenses held the opposing offenses to new season lows in points, Cy Park’s defense dominated at every level and came out in front in the turnover battle.

On top of recovering both of their attempted onside kicks which lead directly to 10 points, the Tigers forced several critical takeaways down the stretch to keep Bridgeland’s comeback bid from gaining momentum.

A muffed punt by the Bears was recovered by Cy Park deep in Bridgeland’s territory after a three-and-out on the first drive of the second half. That breathed new life into the Tigers’ offense, which quickly capped off their march downfield to boost Cy Park’s lead to 24-0.

Perkins, however, delivered the most devastating blow when he picked off a Bears’ pass in the red zone during the early stages of the fourth quarter.

That stifled Bridgeland’s comeback attempt and led to a lengthy Cy Park drive that culminated in a 39-yard field goal by Ayala to place the Tigers ahead by 22 with 4:30 left to play and effectively.

The late interception was the cherry on top of a sweet all-around individual performance for Perkins, who also led the charge for the Tigers’ tenacious defense.

He clogged running lanes up the middle, blanketed receivers in pass coverage and wreaked havoc in the backfield on blitzes all night to help Cy Park hold Bridgeland’s potent offense to new season lows in points (13) and yardage (151).

Although he saw only limited playing time, Bears senior quarterback Conner Weigman’s impact on Friday’s game could not have been greater.

For the second straight week Bridgeland’s offense struggled to get started without its star quarterback at the helm.

Weigman — a five-star recruit who has accounted for 2,153 total yards and 22 total touchdowns so far this season — missed his first game of the season due to an undisclosed injury in Week 7 when the Bears lost for the first time this year 38-28 to Cypress Ranch.

He began Friday’s game on the sidelines too, as senior wide receiver Jonathan Nelson was tapped as the team’s starter under center.

Despite making appearances on two of Bridgeland’s six first-half drives, a hobbled Weigman picked up just one first down courtesy of a flag against Cy Park’s defense before exiting the game for good before halftime.

He left after completing two of seven passes for 7 yards through the air and losing 4 yards on the ground off two carries.

His absence made maintaining drives an uphill slog for Bridgeland and for the second straight week, it became abundantly clear that the most important factor in the Bears’ postseason push and playoff aspirations will be their quarterback’s health.

The Bears used four quarterbacks, including Weigman, to throw for a combined 80 yards — the fewest passing yards in a game for Bridgeland in program history — against Cy Park on Friday.

“It feels good, but we already know what we’ve got,” Perkins said. “We’re going to keep making people believe in us. We’re not tripping.”

The Bears have been a starkly different squad when their senior signal caller has started versus sat.

In the five games Weigman has started under center this season, Bridgeland’s prolific offense tallied 41.2 points and 519.6 yards of total offense per contest in five consecutive victories.

But since October began and the Bears have had to rely mainly on backup quarterbacks, the team’s offense

Weigman waited after the game to congratulate Perkins on receiving his 2021 Under Armour All-American Bowl jersey during a pep rally earlier in the day at Cy Park High School.

“I was talking to my people about that and I was like, ‘Dang, to really grow up watching videos of stuff like that until now (when) I’m getting it, it’s crazy,’” Perkins said.

Perkins, who remains uncommitted, will go on a recruiting visit to College Station — his fourth since April — next week to watch Texas A&M host South Carolina before visiting Oregon to see the Ducks face Colorado on Oct. 30 and Oregon State on Nov. 27.

He announced a top seven earlier this season that included Alabama, Florida, LSU, Texas and USC as well as the Aggies and Ducks.

Two of Weigman’s favorite targets, Nelson and senior wideout Andrew Maleski, brought the Bears’ offense back to life during the second half.

Nelson fired the first of two touchdown passes to Maleski on a 24-yard bomb to put the Bears on the board halfway through the third quarter after rolling the dice on fourth down earlier in the drive.

The duo connected again a few minutes later on an 11-yard touchdown pass with 2:17 left in the third quarter to give Bridgeland a puncher’s chance at knotting it up during the fourth.

The pair of receivers also accounted for almost all of their team’s offensive production.

Nelson ran for 69 of Bridgeland’s 71 rushing yards on the night and completed five of eight passes for 68 yards and a pair of touchdowns.

Maleski was the only Bears’ receiver with a touchdown or multiple catches. He finished the night with three receptions for a pair of scores and 50 of the team’s 80 receiving yards.

Bridgeland fell to 5-2 and 2-2 against district competition after suffering its second straight loss, which dropped the squad into fourth place or a tie for third in the District 16-6A standings pending the results of Saturday’s slate of games.

The costly defeat will likely prevent the Bears from repeating as District 16-6A champions and complicates the team’s path to the postseason with three district contests remaining.

The victory, meanwhile, vaulted Cy Park to 7-0 on the season and 4-0 in district play to move half a game in front of Cypress Ranch (4-1, 3-0) in the 16-6A standings ahead of the Mustangs’ Week 8 contest Saturday night.

The Tigers are one of the few teams throughout Texas high school football to have nearly scored 400 points offensively and surrendered less than 100 points defensively after Week 8 and should be a favorite to contend for the Region II championship in the 6A DII playoffs.

“(We have to keep) doing what we’ve been doing,” Perkins said. “Do everything as a team.”

Bridgeland will look to get back on track when it hosts Cypress Springs (2-5, 1-3) at noon Saturday at Ken Pridgeon Stadium in Houston.

Cy Park will try to move one step closer to capturing a district title and add to its perfect regular-season record when it faces Cypress Woods (3-3, 2-1) in a matchup of 16-6A squads aiming for return trips to the postseason at 7 p.m. Friday at Cy-Fair FCU Stadium in Cypress.