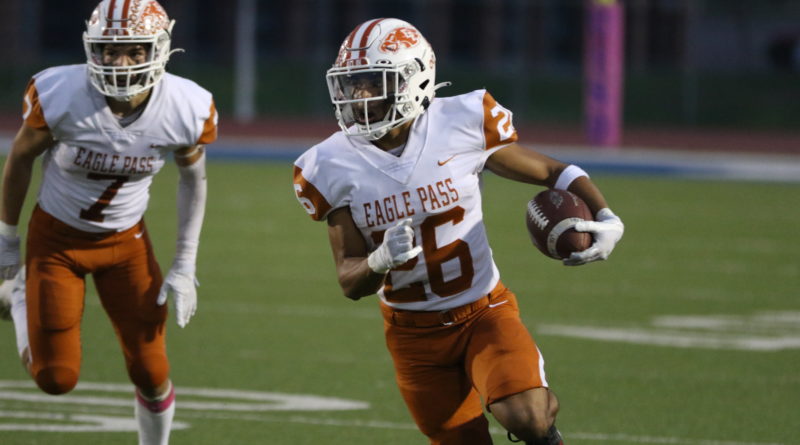 LAREDO, Texas – Eagle Pass is one step closer to securing its second consecutive District 30-6A title after beating Laredo Alexander 21-16 on the road Friday night.

Dakota Kypuros sealed the victory for Eagle Pass with an interception with 44 seconds left in the game.

Laredo Alexander was the first to get on the board in the opening quarter after kicker Mauricio Lopez booted a 25-yard field goal to make it 3-0 with 4:52 on the clock.

In the opening series for Eagle Pass, quarterback Issac Standwick was intercepted by Laredo Alexander sophomore defensive back Dylan Ethridge.

The Eagle Pass offense started to gain yardage later in the half thanks to junior running back T.J. Mares who powered his way through the Laredo Alexander “Predator” defense. Mares gained significant yardage after contact by continuing to move his legs and adding four or five extra yards to his runs.

It did not take long for Mares to punch one into the end zone as he capped off a seven-play drive with a 2-yard touchdown run to give Eagle Pass a 7-3 lead.

Laredo Alexander sophomore quarterback Javier Jimenez, who has put up big numbers in the air and is a leading candidate for Laredo City MVP honors, had a big game for the Bulldogs. In the second quarter Jimenez connected with senior wide receiver Nathan Jasso on a perfectly thrown 45-yard touchdown pass, giving Laredo Alexander a 10-7 lead with 6:56 left in the opening half.

Eagle Pass came right back, handing the ball to Mares who broke loose a couple of times before capping off the drive with a 4-yard touchdown to give Eagle Pass a 14-10 lead with 44 seconds left in the first half.

The Eagles opened the second half with a 35-yard touchdown run by junior Jake Zapata to increase their lead to 21-10. That proved to be all the offense Eagle Pass would need.

Laredo Alexander attempted to rally late in the fourth quarter with Jimenez finding Jasso for a 46-yard touchdown pass. Jasso never broke stride as Jimenez laid it right in his hands. The Bulldogs’ two-point conversion failed, and Eagle Pass held a 21-16 lead with 5:12 left in the game.

Laredo Alexander got the ball back with 1:23 to play, but Kypuros sealed the victory for Eagle Pass with his interception.

Eagle Pass (6-2, 4-0) heads into one of the most anticipated games of the season next Friday when they return to Laredo to face Laredo United South, who is also undefeated in district play.