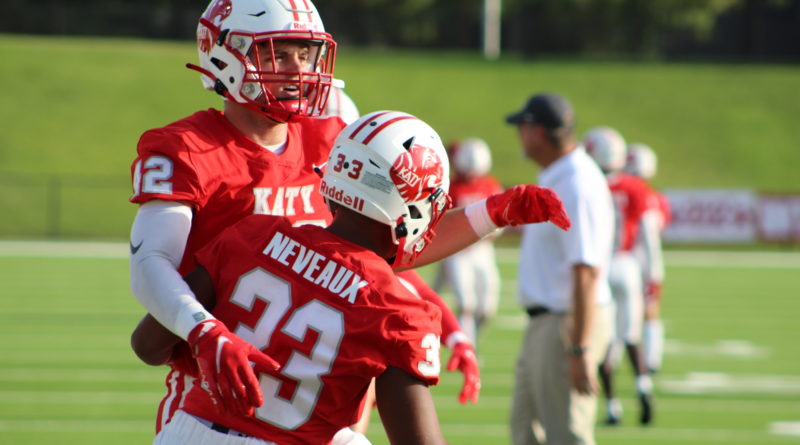 The 2021 Texas high school football season moves into Week 7 and the heat of district play around the state after a pair of huge wins in the Houston area defined the sixth weekend of regular-season action and vaulted a new team into the top five of SBLive’s Texas Top 50 rankings.

This week two new teams made their season debut in our statewide rankings, while undefeated teams in Class 6A and 5A Division I moved inside the top 20 for the first time this season.

Below are SBLive’s Texas Top 50 rankings for the week of Oct. 4. The rankings are compiled by reporter Andrew McCulloch and will be released every week throughout the fall.

Three news teams representing different parts of East Texas in Class 5A Division II made their first appearances of the season in SBLive’s statewide rankings this week. Frisco debuts at 47th this week after downing Princeton 59-21 for the Racoons’ fourth straight win to retain a share of first place in District 17-5A DII. Montgomery checks in at 48th this week after the Bears buried previously unbeaten Bryan Rudder 38-13 for their second straight marquee victory in District 10-5A DII. Ennis clocks in at 49th in this week’s Top 50 after the Lions pulled out a 42-13 road win over Forney to stay undefeated this season and hold onto first place in District 8-5A DII. Manvel and San Antonio Johnson were two of the biggest risers in this edition of SBLive’s Texas Top 50. Manvel moved up two spots to 45th after a significant District 12-5A DI victory against Angleton 49-10 on the road. Johnson, meanwhile, climbed up one spot and leapfrogged Garland, which was on a bye during Week 6, after the Jaguars clobbered San Antonio Roosevelt 62-34 on Friday to stay in first place in District x-6A. Frisco Lone Star, Edinburg Vela and Amarillo Tascosa each won last week top retain their spots inside the top 45 with victories over Denton (72-16), PSJA High (51-12) and Amarillo (34-22). Austin LBJ, the state’s highest-ranked 4A DI team for the second straight week, fell one spot to 50th this week after seizing a 34-28 win against Comal Canyon Lake.

Katy Paetow and Lucas Lovejoy were the biggest climbers in this part of SBLive’s Texas Top 50 after a pair of impressive Week 6 victories. Paetow moved up four spots to 37th and made its first appearance inside the top 40 this season after their third consecutive shutout in a 76-0 victory over Houston Wisdom in which the Panthers allowed -50 total yards of offense. The Leopards climbed up two spots in 33rd after blanking Frisco Memorial 53-0 for their fourth straight runaway win in District 7-5A DII. C.E. King fell two spots after having a bye during Week 6, while Austin Vandegrift, Cedar Hill and Midland Legacy, the highest-ranked West Texas squad, round out this week’s top 35 after earning victories against Austin McNeil (49-7), Waxahachie (14-10) and Woolfforth Frenship (68-28). Alvin Shadow Creek and Corpus Christi Veterans, the Coastal Bend’s highest-ranked team, each moved up a spot in this week’s rankings after securing wins over Houston Strake Jesuit (35-20) and Corpus Christi Moody (27-14) in Week 6 action. Carthage, the highest-ranked sub-5A squad in SBLive’s Texas Top 50, and League City Clear Falls each stayed put after earning victories against and that keep them in the hunt for first place in their respective district title races.

Smithson Valley moved up two spots in this week’s SBLive Texas Top 50 and leapfrogged Cibolo Steele to become the highest-ranked Dsitrict 27-6A squad this week. The Rangers clobbered Schertz Clemens 51-0 to improve to 3-0 against 27-6A teams. Steele, meanwhile, dropped one spot to 25th after a 35-21 win over New Braunfels in district play. Highland Park was the biggest riser in this portion of the Top 50 this week after an impressive 21-16 victory against then 46th-ranked Longview that dropped the Lobos out of this edition of the Top 50 and gave the Scots sole possession of first place in District 7-5A DI. Lewisville also moved up two spots and climbed into the top 30 after downing District 6-6A rival Flower Mound in a 33-24 victory to stay unbeaten. College Station and Spring held onto their spots in the top 25 with dominant district wins over Lufkin (56-7) and Aldine Eisenhower (48-0), respectively. Dickinson and Fort Bend Ridge Point won their Week 6 games against Clute Brazoswood (35-7) and Fort Bend Dulles (44-0) to stay in first place in their respective districts, while DeSoto and Katy Tompkins were also victorious with huge wins over Waco (72-6) and Katy Taylor (52-7) to stay ranked in the top 30 this week.

San Antonio Brennan, the highest-ranked team from the San Antonio area for the sixth straight week, was the biggest mover in this part of SBLive’s Texas Top 50 rankings this week after downing then 50th-ranked San Antonio Taft in a battle of unbeatens. The victory vaults the Bears to the top of the District 29-6A standings after their toughest test of the season so far against Taft. At 4-0 in district play, Brennan holds a half-game lead for first place in 29-6A over Taft and San Antonio Marshall with four weeks left in the regular season. A pair of DFW power in 6A, Allen and Rockwall, each moved one spot closer to the top 10 this week after ascending to 11th and 12th, respectively. Allen earned an impressive 71-29 victory over Little Elm in a clash of one-loss squads in District 5-6A. Rockwall notched its second straight win in District 10-6A with a dominant 57-28 road win over Tyler Legacy. Lake Travis stayed put at 14th in this week’s SBLive Top 50 after crushing Austin High 63-3 to improve to 3-0 against District 26-6A competition. Cypress Bridgeland fell seven spots down to 15th after the Bears suffered their first defeat of the season in a 38-28 loss. Bridgeland was without senior quarterback Conner Weigman, who has accounted for 2,150 total yards and 22 total TDs so far this season, due to injury. The teams ranked No. 16-20 in this week’s statewide rankings all remained in place after winning in Week 6. Arlington Martin and Euless Trinity dominated in district victories against Arlington Lamar (47-0) and North Crowley (42-7), respectively. Meanwhile Aledo, Fort Bend Marshall and Cy Park all flexed their defensive muscle in Week 6 wins over Joshua (55-0), Houston Austin (61-0) and Cy Falls (51-7) to remain unbeaten.

Humble Atascocita moved back into the top 10 for the first since Week 4 after Bridgeland lost its first game of the season to Cy Ranch on Saturday. The Eagles moved up one spot after earning a significant 30-24 victory over Humble Summer Creek in a matchup of one-loss teams in District 21-6A. Two DFW teams, Denton Ryan and Rockwall Heath, also both climbed a spot in this week’s top 10 after runaway wins in district play. Ryan, the highest-ranked 5A team in SBLive’s Texas Top 50, thrashed The Colony 42-3 on Thursday night for the Raiders’ fifth consecutive District 5-5A DI win. Heath cruised to a 62-21 victory over North Mesquite on Friday to improve to 3-0 in District 10-6A. The Hawks have also scored 62 points or more in four of their last five games and 409 points overall on the season. The top seven remained steady in this week’s rankings after all earned lopsided victories in Week 7. Austin Westlake, the state’s top-ranked team and No. 4 squad nationally in SBLive’s Power 25, took down previously unbeaten Austin Bowie 35-0 for its second straight defensive shutout, but senior quarterback Cade Klubnik left the game with an injury during the second quarter. The Austin-American Statesman reported that Klubnik left the game with a separated shoulder on his non-throwing arm. The Chaps’ senior signal caller has thrown for 1,476 yards and 20 touchdowns on 95-of-134 passing and run for 196 yards and six rushing scores on 33 carries. Katy and Southlake Carroll scored blowout wins in district play against Katy Mayde Creek (65-7) and Keller Central (63-7). Denton Guyer and Spring Westfield held onto their spots in the top five after manhandling Denton Braswell 35-14 and Aldine Nimitz 54-6, respectively. Galena Park North Shore and Duncanville rounded out the top seven this week after both teams won to stay undefeated against district competition. North Shore blanked winless Humble Kingwood 56-0 to improve to 3-0 in District 21-6A, and the Mustangs have outscored their district opponents 168-13 halfway through their 21-6A slate. Duncanville, meanwhile, moved to 3-0 in District 11-6A play with its second straight shutout with a 59-0 win against winless Mansfield Lake Ridge. The Panthers enter the back half of their district schedule riding a four-game winning streak during which they’ve outscored their opponents by 42.8 points per victory.