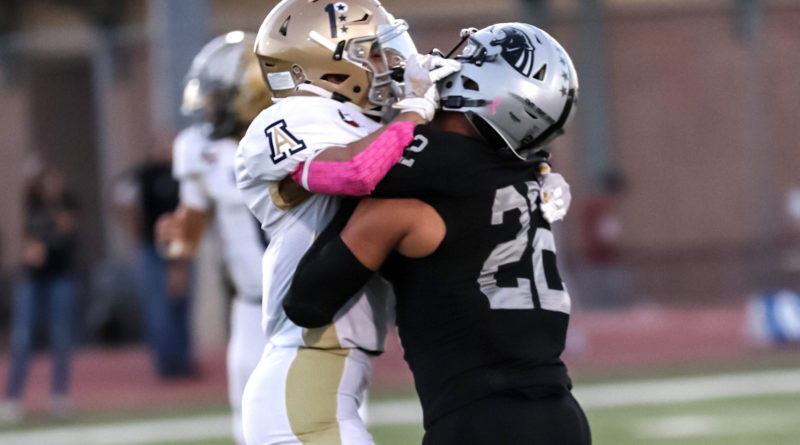 LAREDO, Texas – For the third year in a row Laredo United South has knocked off Laredo Alexander.

Javier Rodriguez scored two touchdowns to lead Laredo United South to a 21-0 victory Friday night, keeping the Panthers perfect in District 30-6A with a 3-0 record.

The Panthers’ offensive line – known as the “Front-Line Force” – paved the way for running back Brandon Benavides, consistently opening running lanes for the junior speedster.

After a scoreless opening quarter Laredo United South started to move the ball on a 40-yard run by Benavides and a 25-yard catch by Nathan Villafranca to put the ball on the 20-yard line with time winding down in the first half.

The Front-Line Force – which consists of Daymeonn Vercher, Levi Gallegos, Oscar Flotte, Luis Chapa and Joel Madrigal – eventually opened a wide running lane for Rodriguez as he darted into the end zone on a 2-yard TD run with 43 seconds left in the second quarter. The extra point sailed wide right, giving the Panthers a 6-0 halftime lead.

Laredo United South made a few adjustments on offense and came out firing on all cylinders the second half. On the second play of the opening series, Benavides broke loose for a 65-yard run. He was chased down by Laredo Alexander’s defensive back Devan Ethridge, who saved a touchdown.

Three plays later Benavides ran in for a 5-yard touchdown with 9:06 left in the third quarter. Laredo United South converted on their 2-point conversion to push the lead to 14-0.

Laredo Alexander came back on the next series and moved the ball down the field on a 20-yard run by Nathan Jasso to put the ball on the 15-yard line after the Panthers were flagged for a penalty.

The Panthers’ TNT defense held their ground, though, forcing a turnover on downs.

Heading into the fourth quarter Rodriguez displayed his speed, racing down the middle of the field and dodging Laredo Alexander’s “Predator” defense for a 25-yard run to put the ball on the 11-yard line.

Rodriguez gave the Panthers some breathing room and made it a three-possession game after running up the middle to score on a 1-yard touchdown with 3:06 left in the game.

The Laredo United South TNT defense put the nail in the coffin after Gavin Espinoza picked off Laredo Alexander quarterback Odie Arambula in the final minute to secure the victory. Arambula replaced Jimenez who was hurt in the prior series after getting sacked.

Laredo United South will now prepare for its biggest game of the season as they take on the Eagle Pass Eagles in a key District 30-6A game on Oct. 22 after a bye week. Laredo Alexander hosts Eagle Pass on Oct. 15.