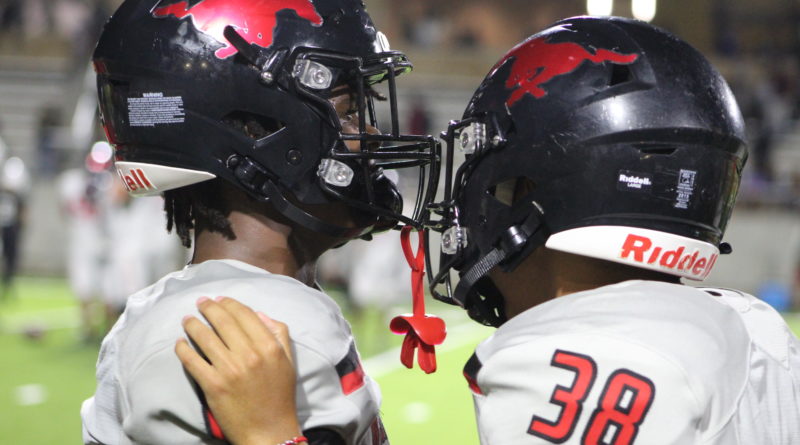 The 2021 Texas high school football season moves into Week 7 and the heat of district play around the state after a pair of huge wins in the Houston area defined the sixth weekend of regular-season action and vaulted a new team into the top five of SBLive’s Texas Top 50 rankings.

This week two new teams made their season debut in our statewide rankings, while undefeated teams in Class 6A and 5A Division I moved inside the top 20 for the first time this season.

Below are SBLive’s Texas Top 50 rankings for the week of Oct. 4. The rankings are compiled by reporter Andrew McCulloch and will be released every week throughout the fall.

San Antonio Taft and Austin LBJ muscled their way into SBLive’s Texas Top 50 for the first time this season heading into Week 7. Taft proved to be one of the Alamo City’s top teams in 2021 after tallying four wins against area teams with winning records, including handing San Antonio Holmes and San Antonio Marshall their only losses of the season so far. The Raiders are riding a four-game winning streak in district play and will contend for the 29-6A district title. Austin LBJ vaults into the Top 50 as the highest-ranked 4A DI team after Argyle dropped out of this week’s rankings following a 21-0 loss to Melissa. LBJ begins district play in Week 7, but the Jaguars dominated a non-district slate that included quality wins against 5A powers Liberty Hill and Manor as well as Waco La Vega, another elite squad in 4A DI. Austin LBJ has scored at least 28 points in every game so far this season. Edinburg Vela, Amarillo Tascosa and Longview all moved up in this week’s Top 50 after significant victories in Week 6. Vela crushed crosstown rival Edinburg 48-7 behind senior quarterback Chase Campbell’s four touchdown passes for sole possession of first place in District 31-6A. The SaberCats, who moved up two spots in this week’s rankings, are averaging 51.0 points per district game, but Edinburg Vela’s biggest strength has been one of the best defenses throughout the state after yielding only 5.8 points per contest. Tascosa and Longview, meanwhile, each climbed three spots. Amarillo Tascosa secured perhaps the most impressive win of any team in the state last Thursday by beating Lubbock 82-0 on the road in District 2-5A DI play. The Rebels are in the midst of a four-game winning streak during which they’ve outscored their opponents 215-55. Longview won its fifth straight game in a 56-0 victory against Wylie East in Week 6. The Lobos have been on a roll since taking down three-time defending Arkansas 7A state champion Bryant in mid-September.

Teams in this portion of SBLive’s Texas Top 50 rankings went a combined 9-0 during Week 6 action (Cedar Hill had a bye). Austin Vandegrift and Lewisville remain knocking on the door of the top 30 after Vandegrift blasted rival Cedar Park Vista Ridge 53-7 and Lewisville outlasted Plano East 29-24 last week. Vandegrift has thrived because of its defense, which has only allowed 62 points through five games. The Farmers, meanwhile, have gotten an enormous boost offensively from senior running back Damien Martinez, an Oregon State commit and one of the DFW’s leading rushers with 864 yards and 15 TDs on the ground through five games. Midland Legacy scored a 42-33 road win against Abilene in its district opener, while League City Clear Falls rebounded with its first district win 38-21 over Friendswood Clear Brook. Lucas Lovejoy downed Prosper Rock Hill 55-14 in another impressive offensive performance. The Leopards have scored 44 points or more in each of their victories this year and are winning by an average of 45.0 points per game. Shadow Creek secured a 45-31 win over Pearland Dawson to move above .500 for the first time this season and take a leading role in the District 23-6A title chase. Corpus Christi Veterans clobbered Corpus Christi Ray 79-10 in District 15-5A DI action, as the Eagles are now averaging 55.8 points per game against 15-5A DI opponents halfway through their district slate. Garland notched a nice 41-7 victory over Garland Lakeview Centennial, while Carthage closed out its non-district slate with a 31-6 win against Pleasant Grove. Garland senior quarterback Cergio Perez (2,012 yards, 28 TDs, 4 INTs on 136-of-191 passing) continues to lead the DFW in passing to pace an Owls’ offense that is averaging 50.7 points per game. The Bulldogs, meanwhile, have won 17 games in a row stretching back to an August 2020 loss at Kilgore.

Half of the teams in this part of the Top 50 — College Station, DeSoto, Cibolo Steele, Smithson Valley and Fort Bend Ridge Point — were on byes during Week 6. That didn’t prevent Highland Park or Houston C.E. King from leaping into the Top 30 this week, though. Highland Park moved up three spots after picking up their fourth straight win in a 35-17 road victory against Sherman to begin district play. The Scots caught fire following a season-opening loss to Southlake Carroll with significant wins over Flower Mound and Rockwall, a pair of teams with senior quarterbacks committed to SEC programs. C.E. King, meanwhile, shot up six spots in this week’s statewide rankings after handing District 21-6A rival Humble Summer Creek 35-10. The Panthers are outscoring their opponents 255-75 six games into the season and have positioned themselves to contend for the District 21-6A championship. Dickinson improved to 2-0 in district play this week with a 49-21 win over League City Clear Creek, while Katy Tompkins and Spring each slid out of the top 20 following their first losses of the season to Katy and Spring Westfield, respectively.

Arlington Martin ascended back inside the top 20 this week, while Cy Park cracked the top 20 for the first time this season heading into Week 7 action. Martin moved up three spots in this week’s Top 50 after the team earned its second district win 56-20 against South Grand Prairie. The Warriors have already scored 121 points two games into their district schedule. Cy Park, meanwhile, climbed two spots after shutting out winless Cypress Lakes 56-0 last Thursday. The Tigers have been one of the state’s most dominant teams so far this season with three 50+ point wins and 61.4 points per game offensively. San Antonio Brennan rose two spots up to 15th, the highest ranking for a San Antonio area team at any point this season so far, after the Bears blanked San Antonio Stevens 58-0 for head coach Stephen Basore. Brennan has built its reputation on the strength of a stout defense that has allowed 11.0 points per game so far this year. Lake Travis moved up one spot in this week’s Top 50 after a 69-21 victory over Buda Hays in District 26-6A action in which the Cavaliers led 56-0 at halftime. The Cavs have looked like one the state’s most dominant teams since starting district competition three weeks ago. Allen and Rockwall swapped places in this edition of the Texas Top 50 after the Eagles secured an impressive 37-24 victory against previously unbeaten McKinney in their district opener while the Yellowjackets survived a tough test by Mesquite in a 25-22 win.

Spring Westfield surged into the top five after downing rival Spring 31-21 in a matchup of two ranked teams to take a commanding lead in the District 14-6A championship race. The Mustangs, who moved up five spots this week, have made a strong argument to be considered the Houston area’s top team six weeks into the regular season. Westfield boasts quality wins over three playoff teams in Class 6A (Galena Park North Shore, Houston Strake Jesuit, Spring) and 5A DI (Fort Bend Hightower) from last year and have held all four of those teams to season lows in points. The Mustangs are loaded with FBS-caliber talent from senior quarterback Cardel Williams, a Tulsa commit with 1,176 passing yards and 14 total touchdowns, and senior defensive tackle Anthony Holmes Jr,  a Virginia commit who leads all 6A defenders with 11 sacks in five games this season. Katy avenged last year’s loss to Katy Tompkins that snapped a 75-game district winning streak, as the Tigers routed their rivals 56-21. Southlake Carroll’s game against unbeaten Keller was rained out Thursday night, but the Dragons delivered a dominant performance Friday afternoon by handing the Indians a 49-13 loss, their first of the season, that dropped them out of this week’s Top 50. Austin Westlake, the top-ranked Texas team and No. 4 overall in SBLive’s Power 25 national rankings, continued its hot start against District 26-6A competition with a 56-point shutout win over San Marcos in Week 6. Westlake senior quarterback and Clemson commit Cade Klubnik (1,317 passing yards, 19 TDs; 150 rushing yards, five TDs) has been one of the state’s most productive and efficient signal callers throughout the state halfway through the season. Bridgeland remained undefeated with a 41-14 victory over Cypress Woods in district play Thursday night, while Denton Ryan also scored a Thursday win by beating Frisco Centennial 37-7 on the road. Duncanville enjoyed a bye during Week 6, and North Shore and Rockwall-Heath clobbered Humble 68-6 and Mesquite Horn 45-3, respectively, as the Mustangs and Hawks head deeper into their district schedules.