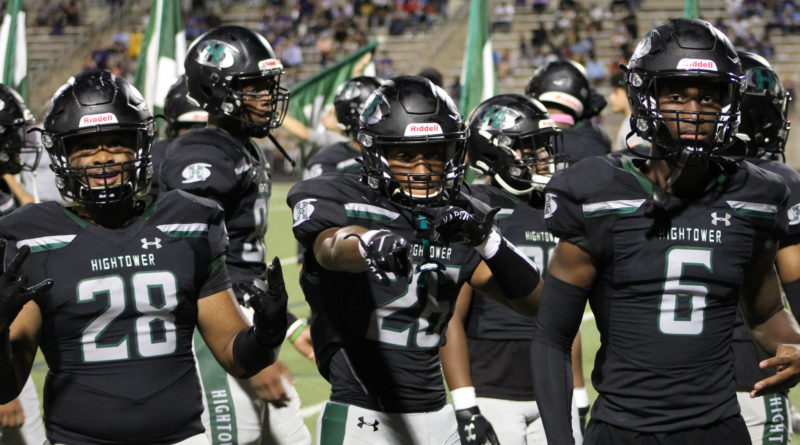 MISSOURI CITY, Texas — Fort Bend Hightower rallied behind the strength of its explosive offense and ball-hawking secondary for an 18-16 comeback win over Angleton on Saturday night at Hall Stadium.

Hightower improved to 4-1 on the season and 3-0 in district play, securing a share of first place with the win. Angleton, meanwhile, dropped to 5-1 overall and 3-1 in district.

Here are five takeaways from the Hurricanes’ victory over the Wildcats on Saturday:

The Hurricanes, however, started to turn the tide in their favor by forcing turnovers that provided their offense with excellent field position.

Hightower scored the game’s first points early in the second quarter after a 32-yard touchdown run by senior back Andreas Missick-Duncombe.

Shortly afterward, senior safety Julian Payne snagged a tipped-pass interception near the line of scrimmage at the Wildcats’ 16-yard line that set the team up for its second score in less than 30 seconds.

“We heard screen on that side. The corner told me watch the screen, so I followed their second receiver because on film that’s all they do.I followed him right into that screen,” Payne said. “We gave (our offense) great field position near the 10-yard line and set them up with a good touchdown.”

The Hurricanes struck again with a pick by senior defensive back Jeremy Strawder that stopped a potential game-tying Angleton drive on the edge of field goal range with about a minute left in the first half.

Hightower’s defense shut out Angleton’s offense during the first and third quarter, and provided the game-sealing stop after the Hurricanes scored a late touchdown to retake the lead.

No player had a greater impact on the game than Hightower senior wide receiver Kaleb Johnson.

Johnson starred on the outside for the Hurricanes and found the end zone twice on big plays.

He caught his first touchdown — a 16-yard throw from sophomore quarterback Kendron Penson, Jr. — on the ensuing play after Payne’s interception and trucked an Angleton defender on his way into the end zone to put Hightower on top 12-0.

“I saw it was open and there was one dude in my way, so I had to go score,” he said.

Johnson saved his biggest score of the night for the fourth quarter, though.

Angleton took its first lead of the game on a 20-yard touchdown run by junior running back Deseahn Thomas, but a failed two-point conversion gave the Wildcats a 16-12 edge with 7:56 left in the fourth quarter.

Hightower, however, wasted no time marching down the field.

Johnson juked multiple defenders and shook off a tackler at the goal line for a 55-yard touchdown catch and run that helped the Hurricanes retake the lead after trailing for only 3 minutes and 16 seconds.

“It was fourth down and we had to go make a play, so that’s we did: we made a big play,” Johnson said.

He beat the Wildcats’ defense with his physicality and by picking up yards after the catch with his speed and elusiveness in open space. Johnson finished the night with nine receptions for 149 yards and two touchdowns, all of which were game highs.

Angleton stayed in the game largely because of the team’s performance defensively in clutch situations.

The Wildcats defense provided a major boost to the team’s special teams right before halftime by holding Fort Bend Hightower to a long field-goal attempt.

The Hurricanes missed, which allowed Kariyen Bonibay Goins to return the kick nearly 70 yards from the back of the end zone to Hightower’s side of the field. A few plays later that stop and return led to a 44-yard field goal from senior Jose Hernandez as time expired in the first half.

Angleton also earned three defensive stops inside the red zone and two at the goal line to preserve a manageable deficit. The Wildcats’ defense stopped Hightower at the 2-yard line on the opening drive of the game to keep the Hurricanes scoreless until the second quarter.

Angleton earned its second goal-line stop of the night when senior defensive back Auzston Steen recovered a fumble near the sideline at the 10-yard line that helped keep Hightower off the scoreboard throughout the third quarter.

The third major stand for the Wildcats’ defense was completed when junior defensive end Jaden Allison sacked Penson while rolling out of the pocket on fourth down during the fourth quarter.

That turnover helped spark Angleton’s nearly 80-yard drive downfield capped by Thomas’ 25-yard touchdown run to give the team an 18-16 edge, its only lead of the game, with 7:55 left to play.

What stood out most about Hightower’s dynamic offensive performance was its balance without one of its star players against a solid Wildcats’ defense.

Senior wide receiver Caleb Douglas, a USC commit who delivered the game-winning touchdown catch against Manvel in Week 5, didn’t play in Saturday’s game against Angleton, but the Hurricanes still put together one of their best offensive performances of the season as a team.

Missick ended the night with 63 yard and the Hurricanes’ only rushing touchdown, while sophomore back Jeremy Payne tallied a team-high 92 yards on 10 touches.

Senior running back Frederick Hankins and senior receiver Nico Lawrence also getting in on the action as Hightower totaled 426 total yards of offense against an Angleton defense that had allowed an average of 4.3 points per game during the last three weeks.

“We knew we were the better team, so Coach (Cornelius) Anthony told us to keep fighting and keep focussing on what we had to do,” Johnson said. “It was a good night for us to show our versatility. We didn’t have two guys here so we had to step up and make plays.”

ANGLETON, HIGHTOWER TO FACTOR INTO DISTRICT 10-5A DI’s TITLE RACE

The major big-picture takeaway from Saturday’s defensive duel was that both Angleton and Fort Bend Hightower should factor into the district title race in 10-5A DI in major ways moving forward.

Angleton, which suffered its first loss of the season to the Hurricanes, drops into a tie with Richmond Foster for third place in a crowded playoff picture.

The Wildcats will face a tough remaining schedule with games against Foster, Katy Paetown and Manvel to finish the regular season as they try to get back to the 5A DI playoffs for the first time since 2018.

Hightower, meanwhile, remains undefeated in district play and moves into a tie with Paetow for first place after back-to-back wins against Angleton and Manvel. The Hurricanes will have to win two tough road games against Foster and Paetow to complete a perfect record against District 10-5A DI competition.

“We knew they were an undefeated team and we respected them like all of our opponents,” Payne said. “We won the one-on-one battles and that’s how we got the W.”

The Wildcats (5-1) will look to keep pace in the district’s playoff race against Manvel (3-2, 2-1) at 7 p.m. Friday at Wildcat Stadium in Angleton.

The Hurricanes (4-1, 3-0) will look to add to their winning streak when they travel to face Richmond Foster (4-2, 3-1) at the same time at Guy K. Traylor Stadium in Rosenberg.