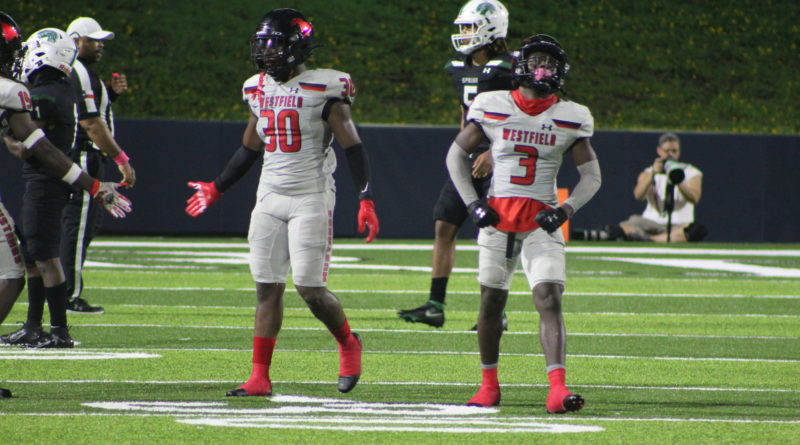 SPRING, Texas — The Spring Westfield Mustangs, the No. 10 team in SBLive’s Texas Top 50, downed the No. 18 Spring Lions 31-21 in a critical District 14-6A win and matchup of ranked teams Friday night at Planet Ford Stadium.

Westfield improved to 5-0 overall and 2-0 in district play with the win and handed Spring (4-1, 1-1) its first loss of the season. Here are five takeaways from the Mustangs’ victory over the Lions:

The Mustangs’ win over their crosstown rivals was fueled by a huge night from senior quarterback Cardell Williams offensively.

Williams, a Tulsa commit, kept Spring’s defense on edge with his ability to pick up yards on the ground, but he shredded the Lions on deep throws that put his team ahead.

He threw three 30+ yard touchdown passes throughout the night spurred a 21-points run for Westfield and demonstrated excellent timing and chemistry with his wide receivers on routes deep down the field.

Williams threw all three of his touchdown passes on the night to junior receiver Da’John Palomo.

The duo connected on a 33-yard touchdown pass before the end of the first quarter. Williams then found Palomo again for 32 and 44-yard touchdowns through the air during the second quarter to carry a 28-7 edge into halftime.

“Obviously me and (Palomo) were connecting a lot, so I trusted him with a lot plays and I just went with it,” Williams said. “Our chemistry is good. We work out together every day and we’ve been working out since January for this, so I just trust them.”

Palomo finished with five catches for 155 yards in addition to his two scores, while Williams threw for 223 yards and three touchdowns on 12-of-23 passing. Senior wideout

The Mustangs’ senior signal caller highlighted a productive night offensively against a top-tier defense in Class 6A with 323 yards of total offense.

The key to Westfield’s rivalry-game victory was ultimately its play defensively.

The Mustangs made a statement early in the night when junior linebacker De’Marion Stamps intercepted a pass and returned it 66 yards for a defensive touchdown, the team’s first score of the night, midway through the first quarter.

The team later recovered a fumble to stifle a Lions’ drive early in the first half.

Spring Westfield sealed the victory with a takeaway late in the fourth quarter too.

The Mustangs added a field goal on a 44-yard kick by sophomore Jonathan Dimas with 50 seconds remaining, but linebacker Kiemond Emilien put the game on ice with a pick at the start of Spring’s final drive.

“We knew we had to get a stop,” senior defensive tackle Anthony Hill Jr. said. “We just tried as hard as we can, they threw it up and we got that interception. Game over,” Hill said. “It feels great. We knew this was going to happen, but it feels great to see it play out. We worked so hard over the summer and we knew we were going to do something great this year and now it’s playing out thank God.”

Westfield boasts an elite defense that has allowed 12.8 points per game halfway through the 2021 regular season.

The Mustangs’ defense has also earned a reputation as one of the top units in Class 6A after holding Aldine Davis, Fort Bend Hightower, Galena Park North Shore, Houston Strake Jesuit and Spring to their fewest points of the year.

No player stood out more in Spring Westfield’s solid defensive performance than Hill.

Hill, a Virginia commit, dominated the game all night in the trenches and frequently fought his way into the backfield and chased down Spring quarterback Bishop Davenport for stops on several scrambles.

He finished the night with a pair sacks and spearheaded a six-sack night for the Mustangs’ defense.

“I’m glad we got the dub. We played great as a team and this is just a great feeling,” Hill said. “It was about the preparation, hard work through the week… paying attention to detail and playing 110% trying to fly to the ball, hit hard and play Westfield defense.

“Every day we work strength, getting off the ball and getting knock-backs. Once we get a knock-back, it’s really free game from there and you can just play football,” he added. “Once you get those big O-linemen on their heels, it’s over from there.”

Hill, a 6-foot-2 three-star recruit, has tallied at least one sack in each of Westfield’s five wins this season and has averaged double digit tackles per game, leading the Mustangs in tackles and sacks.

Spring rallied after halftime thanks to a comeback bid sparked by its defense.

The team’s defense notched four consecutive stops against Westfield’s offense to start the second half that allowed the Lions’ offense to claw its way back into the game.

Senior defensive back Dorian Friend made several critical pass deflections to break up deep passes throughout the second half, while senior defensive end Gerrod Henderson sacked Williams and made a number of important stops to help keep Westfield’s offense from finding the end zone.

The Lions defense allowed just three points during the third and fourth quarters to make a second-half comeback feasible for Spring, which trailed by a touchdown halfway through the fourth quarter, before Emilien’s victory-sealing interception gave Westfield the win to avenge a one-score loss to the Lions last year.

“I was confident in me and my team, especially our defense,” Williams said. “It means a lot because this is our tradition and we had to bring it back home. It was personal. It was more than just winning the game. … We just need to keep working and stay humble.”

Spring’s defense held the Mustangs to 31 points, their second-lowest point total of the season so far.

Despite a slow start Davenport, a senior and Utah State commit, finished with 332 yards and two touchdown throws on 24-of-43 passing to lead a 396-yard offensive effort for the Lions.

Martin, who also snagged a third-quarter touchdown pass from running back Myron Carter on a trick play, finished with a pair of touchdown catches and team highs in receptions (six) and receiving yards (101). Carter and senior running backs Tyler Fussell also shined offensively for Spring with big nights on the ground.

Palomo and senior receiver Chuuky Hines stood out in Westield’s aerial attack, while junior running back Dahmeir Scott helped the Mustangs keep the chains moving on the ground.

Spring (4-1, 1-1) will try to get back on track next week when the Lions travel to face Aldine Eisenhower (3-2, 2-0) at the same time Thursday at W.W. Thorne Stadium in Houston.