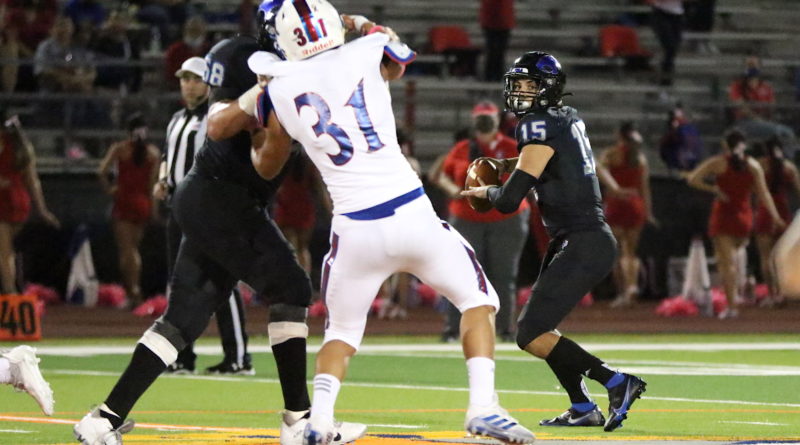 The Sabercats’ high-powered offense rode the arm of quarterback Chase Campbell (four touchdown passes) and the legs of running back Pablo Rivera (three total touchdowns) to remain unbeaten on the season at 6-0.

It did not take long for Edinburg Vela to flex their offensive muscle, scoring on their opening series. The Sabercats marched down the field on great runs by Rivera and Campbell to put the ball on the three-yard line. Rivera took a hand off from Campbell and scored on a 3-yard run at the 6:51 mark in the opening quarter.

Edinburg (3-3) came right back as quarterback Rolando Abrego reeled off a 40-yard run to put the Bobcats in the red zone. Abrego eventually punched in Edinburg’s only touchdown of the night on a one-yard run to make it a 7-7 game with 1:58 left in the first quarter.

Noel Serna returned the ensuing kickoff 45 yards to put the Sabercats right back in business. On the first play Campbell went to the air and connected with Rivera for a 39-yard touchdown pass as Edinburg Vela took a 14-7 lead to close out the quarter.

In the second quarter Edinburg made a goal line stop denying the Sabercats a touchdown at the 3-yard line. Edinburg Vela had to settle for a field goal by Job Juarez who was perfect on the night. Juarez gave the Sabercats a 17-7 lead with 10:03 in the quarter.

Campbell then started to go to the air and found Jaxson Shupe for a 15-yard touchdown pass as Edinburg Vela extended their lead to 24-7.

Abrego and Edinburg were able to come up with some big plays to move the ball, connecting on a 40-yard pass to senior wide receiver Christian Ramirez but could not get into the end zone. Edinburg was forced to punt, but the Sabercats’ defense blocked the punt to end the first half.

The Sabercats did not slow down in the second half and even took their game up a notch on both sides of the ball. The offense continued to flow while the defense came up with two interceptions and two fumble recoveries all in the third quarter.

The Sabercat defense that had been solid all game long, not allowing Edinburg to get into any offensive flow, started to pick apart the Bobcat offense. Junior defensive back Justin Navarro intercepted Abrego. Campbell then found junior wide receiver Carlos Tamez for his 14th touchdown pass of the season to give Edinburg Vela a 37-7 lead.

Things continued to go downhill for Edinburg as the offense lost a handle on the ball and it was recovered by senior defensive lineman Joshua Gallegos. With less than a minute left in the third quarter Edinburg fumbled the ball on a kickoff only to have the Sabercats recover on the 2-yard line with 59 seconds left in the quarter.

A play later Rivera ran for his third touchdown of the night as he found the end zone on a 3-yard run, giving the Sabercats a 45-7 lead.

The final points of the game came courtesy of Juarez who was perfect in extra points on the night. Juarez also connected on his only two field goal attempts with the final one coming at the 1:18 mark in the fourth quarter to give Edinburg Vela a 48-7 lead.