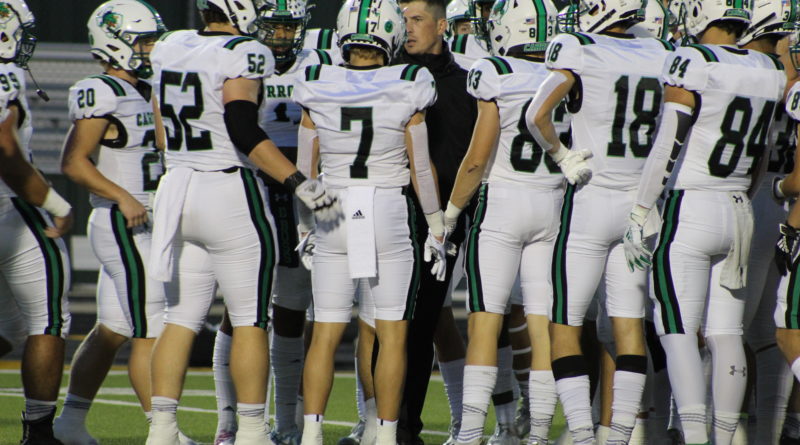 The Dragons and Indians, however, will have to wait a little while longer to take the field for their district-defining matchup.

Keller and Southlake Carroll, the seventh-ranked team nationally in SBLive’s Power 25, hardly made it out of their locker rooms Thursday evening when nearby lightning strikes and escalating rainfall triggered a lengthy weather delay.

Carroll and Keller were allowed to start stretching and warming up on the field around 7:30, about an hour into the inclement-weather delay. The Dragons and Indians squeezed in almost 5 minutes of on-field warmup time before more lightning again halted pregame routines and sent everyone back to the locker rooms.

Coaches and players from each program were determined to play the game Thursday night and hoped to get started before 11:59 p.m. to squeeze it in despite lengthy delays. Instead, the contest was called off at 9:30 p.m. when the rain delay hit the three-hour mark.

Stadium officials and representatives from each athletic department confirmed to SBLive Sports that they have chosen to postpone the Keller (5-0, 1-0) vs. Southlake Carroll (5-0, 1-0) game to 2 p.m. Friday at the Keller ISD Athletic Complex.

The Dragons and Indians, one of three weekend matchups pitting two unbeaten teams ranked in SBLive’s Texas Top 50 against each other, will duel for first place in District 4-6A with the winner moving one step closer toward a district championship.

Carroll and Keller will serve as the front-end of a Keller ISD Texas high school football doubleheader Friday afternoon, while Keller Timber Creek (1-3, 0-1) will battle Keller Fossil Ridge (2-3, 0-1) in the nightcap at 7 p.m. Friday at the Keller ISD Athletic Complex.