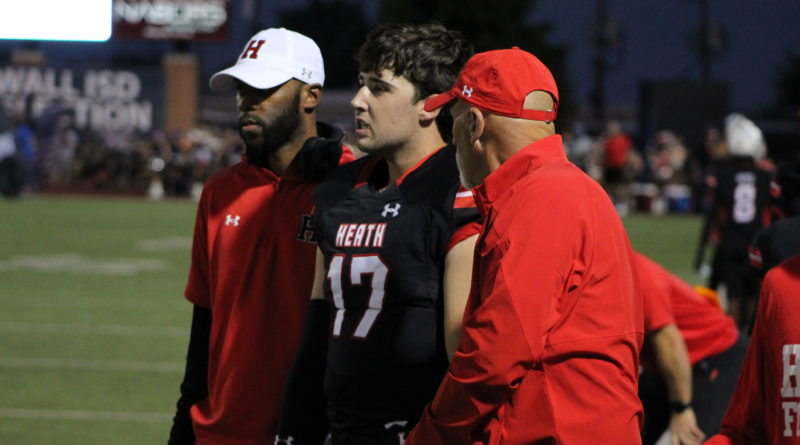 The 2021 Texas high school football season hits the halfway point moving into Week 6 after a pair of major upsets defined the fifth weekend of regular-season action and shook up the top of SBLive’s Texas Top 50 rankings. This week three new teams made their season debut in our statewide rankings, while a pair of DFW and Houston area 6A heavyweights cracked the top 10 for the first time this fall.

Below are SBLive’s Texas Top 50 rankings for the week of Sept. 27. The rankings are compiled by reporter Andrew McCulloch and will be released every week throughout the fall.

San Antonio Johnson, Keller and Tomball became the three newest teams to make their first appearance of the season in SBLive’s Texas Top 50 rankings after each team scored a significant Week 5 victory to improve to 5-0. Johnson downed San Antonio Brandeis, which was previously unbeaten and ranked 46th, 28-22 on Friday in the Peanut Butter Bowl, which will likely give the Jaguars an inside track at claiming the District 28-6A title. Keller earned its spot in the statewide rankings this week following a 41-7 win over rival Keller Central. The Indians have now outscored their opponents 185-40 halfway through the regular season. Tomball also moved into the Top 50 this week after the Cougars downed rival Tomball Memorial 48-35 on Friday night. Cougars senior Cal Hellums, an Army commit, has been one of the state’s best dual-threat QBs after throwing for 726 yards and 11 TDs on 57-of-83 passing and running for 507 yards and three scores on 55 carries. Amarillo Tascosa and Longview each jumped a spot this week after dominant district-opening wins over Amarillo Palo Duro (47-6) and West Mesquite (56-28), respectively. Edinburg Vela also moved up one spot after the SaberCats stomped crosstown rival Edinburg North 62-12. Vela has outscored its opponents 228-28 through five games this season.

Garland, Carthage and Houston C.E. King all climbed into the top 40 in this week’s rankings after a series of impressive Week 5 victories. The Owls were one of the biggest movers in this week’s Top 50 after moving up eight spots following a 56-29 win at Garland Naaman Forest to stay unbeaten. Senior quarterback Cergio Perez, a South Dakota commit, leads the DFW in passing with 1,654 yards and 25 touchdown throws on 122-of-167 passing. Carthage earned a signature 28-7 victory over previously undefeated Gilmer, the reigning state champs in 4A DI, after two straight bye weeks. The Bulldogs moved up four spots to 38th, the highest ranking of the season for any sub-5A team. C.E. King opened up district play in 21-6A with a 55-6 victory against winless Kingwood. The Panthers’ backfield boasts four 100-yard rushers through five games headlined by the senior duo of Jerrell Wimbley (851 yards, 11 TDs) and D’Korien Hammond (499 yards, seven TDs). One of the other major climbers throughout SBLive’s Texas Top 50 this week was Lewisville, which moved up five spots after a dominant display in a 64-28 victory over Plano East to begin district play in -6A. The Farmers have rallied behind tough-running senior running back Damien Martinez, an Oregon State commit, who has racked up 662 yards and 12 touchdowns on the ground in four games. Converse Judson and Manvel tumbled out of the top 40 after falling to Schertz Clemens (17-14) and Fort Bend Hightower (16-12) in close losses. League City Clear Falls also fell nine spots in this week’s rankings after the Knights suffered their first loss of the season in their District 24-6A opener.

A trio of teams — Dickinson, Fort Bend Ridge Point and Highland Park — each moved back into the top 30 this week. Dickinson scored an impressive 28-7 victory over League City Clear Falls in their 24-6A opener, climbing four spots in our rankings and establishing themselves as the district title favorites. Ridge Point scored its second straight lopsided victory against a district opponent by crushing Fort Bend Clements 56-20 to hand the Rangers their first defeat of the season. The Panthers own one of the Houston area’s deepest offenses with four 200-yard rushers headlined by dual-threat quarterback Bert Emmanuel Jr. (438 rushing yards, 5 TDs; 834 passing yards, 11 TDs). Highland Park rose one spot after being on a bye during Week 5. Cibolo Steele dropped down a spot and Smithson Valley jumped up a spot, as the Knights and Rangers both won in Week 5 to remain undefeated and move on step closer toward a district-defining showdown in 27-6A. College Station, Cy Park and DeSoto each climbed up one spot following lopsided wins in district play. Desoto rebounded with a commanding 56-28 victory at Mansfield behind a huge night for quarterback Matt Allen (363 passing yards, six TDs). College Station crushed previously unbeaten New Caney 35-6 on Friday night, as Cougar senior quarterback Jett Huff set the program’s new all-time completions record (360) Huff has thrown for 1,138 yards and 17 touchdowns and helped College Station outscore its opponents 226-37 through five games. Cy Park was on a bye during Week 5, but the Tigers have scored at least 62 points in three out of four games so far this season and beat their opponents by an average of 45.5 points per contest.

Fort Bend Marshall moved into the top 20 during a mostly uneventful weekend for teams on the periphery of the statewide top 10. The Buffaloes notched their second straight shutout victory with a 59-0 win over Houston Waltrip. Marshall has scored 131 points since allowing its last score defensively in Week 3. Aledo, Katy Tompkins, San Antonio Brennan and Spring all stayed put in this week’s Texas Top 50 after all four programs won decisively against district opponents during Week 5. Tompkins eked out a 32-28 win against Katy Cinco Ranch in its District 19-6A opener, while Spring smashed crosstown rival Dekaney in a 57-7 victory in District 14-6A. Tompkins has thrived under first-year starting quarterback Cole Francis, who has thrown for 1,105 yards and 11 touchdowns on 63-of-100 passing. The Lions are off to an incredibly hot start thanks to their stifling defense and dual-threat quarterback Bishop Davenport, a Utah State commit with 1,317 yards and 17 TDs through the air in addition to 349 yards and five scores on the ground. Aledo annihilated Everman 52-7 in the team’s second straight blowout win in district play. The Bearcats are outsourcing their district opponents 107-21 thanks to one of the toughest defenses anywhere in Texas high school football. Brennan remained the top-ranked San Antonio area team in SBLive’s Texas Top 50 after the Bears enjoyed a bye week.

Rockwall Heath and Spring Westfield crashed into the top 10 of SBLive’s Texas Top 50 rankings for the first time this season. Heath surged to No. 9 in the latest edition of the statewide rankings after toppling rival Rockwall in an I-30 Classic shootout for the record books that the Hawks won 79-71 in double overtime. Rockwall Heath boasts the most dangerous offense in Class 6A at the season’s halfway point as well as one of the state’s top quarterback-running back combos in Indiana commit Josh Hoover (1,601 passing yards, 18 TDs) and Minnesota commit Zach Evans (724 rushing yards, 13 TDs). Westfield, meanwhile, came off its bye week looking as strong as ever in a convincing 56-0 win over Aldine Davis last weekend. The Mustangs gained attention throughout the state when they took down North Shore 27-21 in Week 3, but will have another major test coming up in Week 6 against rival Spring in a matchup of unbeaten Houston area 6A squads. Denton Ryan moved up one spot after a decisive 27-3 victory against Frisco Wakeland on Thursday, but the top seven remained intact. Bridgeland buried Langham Creek 48-16 as senior QB Conner Weigman, a Texas A&M commit, threw for 345 yards, ran for 94 more yards and accounted for four total TDs. Duncanville ran for 511 yards as a team during a dominant 76-0 win at home against Waco Midway 76-0, while North Shore manhandled Beaumont Westbrook in a 44-7 road win to start district play. Guyer took down McKinney 44-26 after a close start, while Katy and Southlake Carroll — the sixth and seventh-ranked teams in SBLive’s Power 25 national rankings — cruised to resounding district-opening victories against Katy Seven Lakes (45-3) and Trophy Club Byron Nelson (68-7), respectively. Katy will headline Week 6 action with a highly-anticipated rematch against Katy Tompkins after the Falcons snapped the Tigers’ 75-game district winning streak last year. Top-ranked Westlake’s defense shined with eight sacks in a lopsided 63-6 district win over Austin Del Valle, with the Chaparrals scoring 54 points or more for the third time in three games this season.