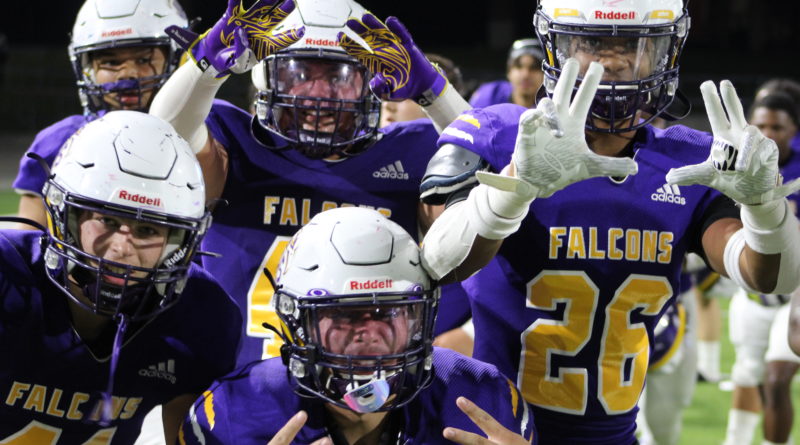 Here are five key takeaways from Jersey Village’s defensive win over the Mustangs to kick off district play in 17-6A:

No single positional group did more to help secure the Falcons’ victory than the team’s front seven defensively, specifically its defensive line.

Jersey Village’s linebackers and a rotating crew of defensive linemen controlled the trenches with their collective burst off the line of scrimmage.

The Falcons tallied five sacks collectively, but their pass rush routinely deprived the Mustangs’ offense time to set up deep plays and forced Memorial quarterback Chase Goodwin to make throws on the run while escaping a collapsing pocket.

Junior defensive end Malik Slone and senior defensive linemen Jeffrey Patton and Landen Suarez were virtually unstoppable when it came to keeping them out of the backfield, seemingly cutting through the opposing offensive at will.

Senior linebacker Gavin Wuthrich made the biggest sack of the night for Jersey Village on a huge hit that jarred the ball loose and gave possession back to the Falcons late in the fourth quarter, effectively cementing the victory for his team and quashing Memorial’s hopes of a late rally.

“Coming off the edge I see the quarterback turn his whole back to me and if he doesn’t get rid of the ball, then it’s all over,” Wuthrich said. “Everybody came out to play. We wanted it more. Everybody (did) their job and everything (fell) into place.”

The Mustangs struck first in this game on a 2-yard touchdown run by junior running back Carson Zahn with about 5 minutes left in the first quarter. Zahn ran for 17 carries for 63 yards on the night and accounted for more than half his squad’s total offensive yardage.

Houston Memorial struggled to find its footing offensively from that point onward. The team’s offense was unable to consistently sustain drives long enough to carve into Jersey Village’s lead.

Goodwin made several quality throws under pressure in critical third and fourth-down situations to keep his team’s offense on the field, but it was difficult for the Mustangs’ offense to offset the relentless Jersey Village pass rush which forced throw aways and deflected a few passes at the line of scrimmage too.

That was enough to disrupt the flow of Memorial’s offense, however Jersey Village denied the Mustangs their best scoring opportunity of the second half when junior defensive back Chris Noble intercepted a tipped pass at the 7-yard line and returned it 93 yards for a defensive score .

That gave the Falcons’ a three-possession lead, the biggest of the night, and took a potential touchdown off the board for Memorial too.

For the third time this season, two quarterbacks made an appearance under center for Jersey Village: sophomore Adam Tran and junior Arbrie Carter.

Tran separated himself for the second straight week, though, and strengthened his grip on the Falcons’ primary QB role with a strong performance Saturday night.

He threw for 216 yards and a pair of touchdowns on 16-of-26 passing. Tran’s first touchdown toss was a 6-yard lob to Carter, who tapped his toes inside the back of the end zone, to tie the contest up during the second quarter.

He struck again minutes later on a sideline fade to wide receiver Grant Wiltz, who dove across the goal line for a 58-yard touchdown reception to give Jersey Village its first lead.

Tran — who threw for 1,515 yards and 17 touchdowns on 103-of-222 passing in as a freshman last year — has been out to prove he has what it takes to lead the offense again in 2021 and has now surpassed 200 yards through the air and completed 60.5% of his passes in the Falcons’ last two games as their primary signal caller.

That presents the opportunity for Jersey Village to experiment and tinker with its offense, especially after Carter showed how much of an athletic, versatile offensive weapon he can be in different spots.

Noble turned in the top performance of starters in the secondary on either side, adding a number of big hits over the middle and pass deflections deepen coverage to his long interception return for a touchdown.

His pick marked his second defensive score of the season after taking an interception 56 yards to the house in Jersey Village’s season-opening 50-7 win over Alief Hastings. Noble also has four tackles for loss and a blocked punt so far this season.

“What I saw was Landon Suarez, the D-end, hit the QB and he’s inaccurate when he’s being pressed,” Noble said. “So when he tried to throw the ball and one of our other safety, Maurice Evans, came in and hit the receiver. He dropped the ball and I came under it and took off with it.”

Clark was swarming all over the field making stops and delivering punishing hits at the center of the Mustangs’ defense. Estes, meanwhile, carried the load for the Falcons’ rushing attack by running 22 times for a game-high 94 yards, while Jones hauled in a team-high seven catches.

EXPECT JERSEY VILLAGE TO CHALLENGE FOR DISTRICT 17-6A TITLE

Oh the difference a year makes.

Jersey Village fell to Houston Memorial 28-13 in their most recent meeting in 2020.

That loss last season dropped the Falcons to 0-3 and gave the them an uphill climb to the postseason. Now a year later, the team’s win over the Mustangs improves Jersey Village’s overall record to 4-0 for the first time since 2014.

“These are my brothers and I love to see them make plays and work as a team. I love this stuff and it’s awesome to get to play with my brothers,” Wuthrich said. “We’re a brotherhood. We take it one game at a time, one week at a time. We’re going to keep practicing hard, coming together to do the sport we love and play our best.”

The Falcons, who finished fourth in 17-6A after a slow start last season, have the defensive muscle (16.5 ppg allowed) and firepower out wide and in the backfield to make a legitimate run at the district championship this time around. Expect Jersey Village to challenge reigning champs Cy-Fair and Houston Stratford for the district crown, especially after the Spartans upset the Bobcats in their district opener.