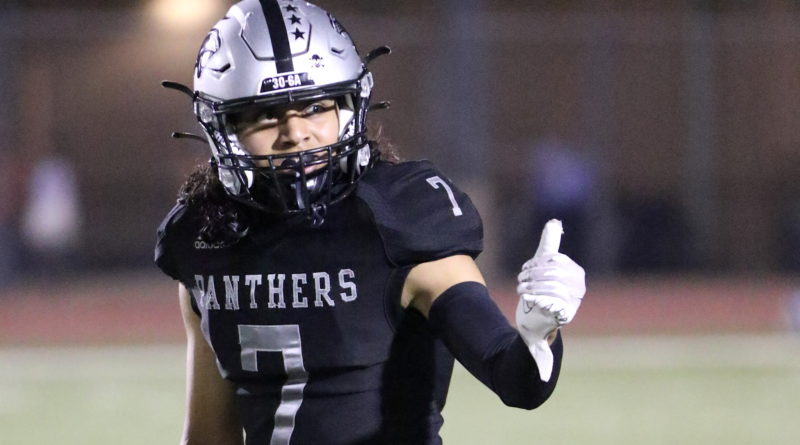 LAREDO, Texas – Laredo United South’s defense has been dubbed “TNT” and Friday night it lived up to its billing.

The Panthers’ explosive defense came up with several game-changing plays that led to a 27-7 win over Laredo United in the District 30-6A opener at the Student Activity Complex.

Laredo United South’s defense recovered a fumble and intercepted two second-half passes that led to 14 points and put the game out of reach for the Longhorns.

Panthers’ linebacker Francisco Rios came up with the fumble recovery in the third quarter, pouncing on the ball after Laredo United quarterback Armoni Saenz let it slip through his hands. That play changed the tide of the game after a tight opening half. Laredo United South marched down the field and scored on a 13-yard touchdown pass from sophomore quarterback Luis Cisneros to Javier Rodriguez to take a 21-7 lead.

Junior defensive back Ray Trevino intercepted a Saenz pass in the fourth quarter to again swing the momentum. The previous play Laredo United senior wide receiver Cesar Ramirez had hauled in a 45-yard catch to give the Longhorns great field position.

With the momentum in their favor Laredo United South capitalized as Cisneros connected with senior wide receiver Armando Garza on a 40-yard touchdown pass to give the Panthers a 27-7 lead with 4:15 left in the game. The 2-point conversion failed, but the damage was done.

Laredo United replaced Saenz in the fourth quarter in favor of sophomore quarterback Atzel Chavez Jr. With the Longhorns attempting a comeback and the clock on the side of Laredo United South, they were forced to go to the air. But Chavez was intercepted by senior defensive back OJ Lozano, effectively ending the game.

Laredo United South junior running back Brandon Benavides, who took the running back reins from his older brother, Brian, who graduated in May, gave the Panthers’ an early 7-0 lead on a one-yard touchdown run in the first quarter. The TD capped an impressive opening drive for the Panthers, and Christian Gonzalez added the extra point to give Laredo United South a 7-0 lead with 7:20 left in the opening quarter.

Laredo United responded on their first series of the game as Longhorns’ junior running back Frank Soto scored on a 25-yard run to even things up at 7-7 with 4:56 left in the first quarter. But that would prove to be the only points of the game for the Longhorns, who were held in check by the Panthers’ “TNT” defense the rest of the way.