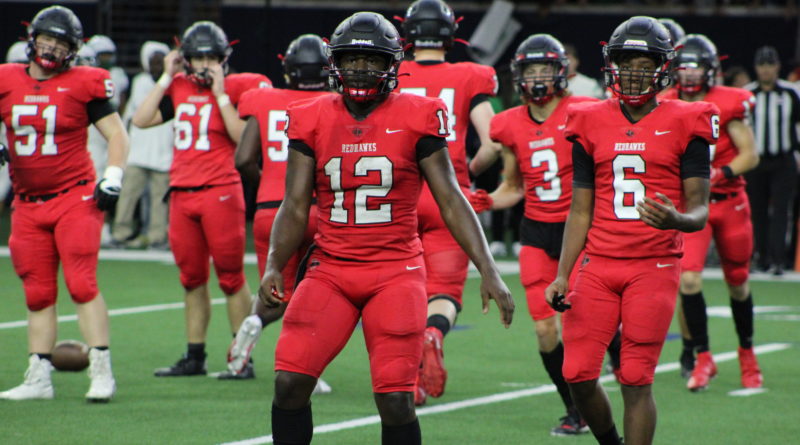 FRISCO, Texas — Frisco Liberty’s early edge was quickly beginning to slip away once the second half kicked off against Lake Dallas.

Liberty had given up back-to-back touchdowns to the Falcons that ended the second quarter and began the third to trim what was a three-score lead down to a three-point deficit.

The dual-threat junior signal caller took command of the contest on the ground and put his athleticism on full display. Luster ran for three consecutive scores as part of a four-touchdown performance to squash the Falcons’ comeback chances and secure a 41-24 victory for Frisco Liberty on Thursday night at the Ford Center in Frisco.

“Halfway through the second half, I really felt like a lot of our guys weren’t there mentally, but that (first rushing) touchdown really boosted our confidence a little bit.” Luster said. “We came together as a family, as teammates, to fire each other up and get each other going.”

Liberty played without one of the state’s premier offensive weapons in senior wideout Evan Stewart, the top-ranked Class of 2022 recruit throughout Texas, but had little trouble moving the ball behind a complete team effort offensively spearheaded by Luster.

Luster was phenomenal through the air during the first half for the Redhawks. He had racked up close to 200 passing yards by halftime and finished with 241 yards and a touchdown on 25-of-40 passing.

He found senior receiver Lawson Towne, who had a huge night as the focal point of Liberty’s aerial attack, in the back of the end zone on a dart of a 3-yard touchdown throw to get on the board first.

Luster completed passes to seven different receivers throughout the night, while Towne led the unit by tallying game highs in catches (12) and receiving yards (134).

When Lake Dallas made a concerted effort to beef up their pass defense after halftime, though, Luster kept his huge night going with his feet.

He ran for his first of three second-half rushing touchdowns when he scrambled toward the sideline and trucked a Falcons’ defender at the goal line to complete a 20-yard touchdown run late in the third quarter.

Luster struck again on a pair of scoring plays during the fourth quarter that cemented the win for Frisco Liberty.

He took a shotgun snap, weaved through a few Lake Dallas defenders, cut back toward midfield and raced 80 yards for his second rushing score of the night one play after Liberty’s defense recovered a fumble on the edge of the red zone.

Luster’s third and final rushing touchdown was his most electric, however. He scooped up a fumble in the Redhawks backfield and peeled off toward the outside to sprint for a 62-yard touchdown run to put the game on ice midway through the fourth quarter.

Luster’s epic night on the ground came to a close with a career-high 180 rushing yards on nine carries, giving him 421 total yards and four touchdowns for the game.

“If they stop one thing, we’ve always got another door open. It’s all about the great athletes we have on this Liberty Redhawks football team that are willing to make plays for each other and open up the game a little bit more,” he said. “None of it would have happened without my teammates with the good blocks. We took it for six, celebrated as a family and got the win together.”

Liberty’s defense also delivered when it mattered most.

On top of stripping away a fumble on a sack at the edge of the red zone that set up one of Luster’s scoring runs, the Redhawks set the tone by stopping Lake Dallas on four consecutive run plays as part of a forceful goal-line stand on the Falcons’ opening drive.

Senior linebacker Daniel Ajayi made nearly as many plays on defensive as Luster did offensively. He routinely blew up rushing plays at the line of scrimmage and his relentlessness as a pass rusher led to multiple sacks.

Lake Dallas, however, scored two of its three touchdowns on long throws. Senior quarterback Brendan Sorsby, who was battered by Liberty defenders on several scramble attempts, tossed the first of those touchdown passes to receiver Evan Weinberg on a slant route from 45 yards out.

Sorsby added a 3-yard rushing score to bring the Falcons within three points of tying it up, but was replaced by junior Micaiah Brooks, who hurled a deep touchdown pass to wideout Niki Gray during the fourth quarter.

The victory lifts Frisco Liberty to 5-0 overall and 3-0 against district play, while the Falcons’ second straight loss drops them to 3-2 overall and 1-2 in district.

The Redhawks will aim to stay undefeated when they return to action for another district tilt on the road against crosstown rival Frisco (3-0, 1-0) at 7:30 p.m. Friday, Oct. 1 at the Ford Center in Frisco.

Lake Dallas will look to reverse their fortunes in an opportunity for a bounce-back performance against Princeton (2-2, 0-2) at 7 p.m. Friday, Oct. 1 at Falcon Stadium in Corinth.

“We feel like we’re coming together as a family. That’s the main thing about this team: our chemistry and bond is so close together that In don’t feel like anyone can break the bond that was have,” Luster said.

“We’ve still got a lot of work to do as a team, especially with a big game this week against Frisco High. They’re a good team as well, but I feel like going into next week’s game we’re going to watch a lot of film, fix some of those mistakes we had and we should be good.”