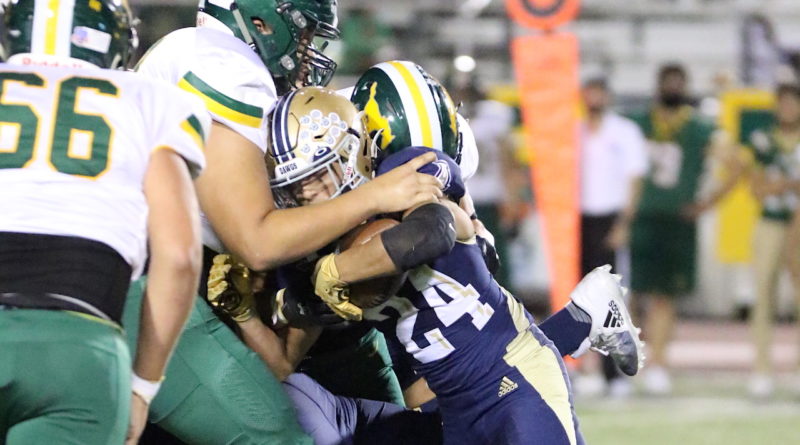 The Bulldogs also got a big game from sophomore quarterback Javier Jimenez, who helped Laredo Alexander effectively move the ball with his arm and legs.

In the opening quarter Jimenez used his legs to race down the right side of the field for a 20-yard run to put the ball on the 1-yard line. On the ensuing play Rodriguez ran the ball up the middle to score a 1-yard touchdown at the 6:58 mark. Senior kicker Mauricio Lopez booted in the extra point to give Alexander an early 7-0 lead.

A defensive battled ensued for the remainder of the first quarter, with Laredo Alexander defensive back Cesar Rendon making a big play by intercepting a tipped pass from Laredo Nixon quarterback Raymundo Gonzalez.

Laredo Alexander started to gain big yardage in the second quarter as Jimenez hooked up with his favorite targets – freshman Ivan Pina and senior Nathan Jasso. Jimenez’s 65-yard pass to Jasso put the Bulldogs in scoring position with less than 6 minutes left in the quarter, but they couldn’t punch it in.

Laredo Alexander eventually added a field goal from Lopez to take a 10-0 lead at halftime.

Laredo Nixon came out firing in the second half, with junior Alexis Aldana returning the kickoff 60 yards to the 5-yard line. Aldana was caught from behind by Laredo Alexander speedster, sophomore Dylan Ethridge who saved a touchdown.

Laredo Nixon scored two plays later as senior running back Alexis Gonzalez rushed for a 5-yard touchdown to make it a 10-7 ballgame with 8:25 left in the third quarter.

That proved to be all the points Laredo Nixon would score on the night as Laredo Alexander’s “Predator” defense dominated the rest of the game.

Laredo Alexander lost Jimenez for the second half of the third quarter after he was injured on a quarterback keeper. A player landed on the back of his heel and Jimenez came out of the game on his own power, limping to the sideline. He was replaced by senior Odie Arambula for the remainder of the quarter.

Jimenez returned for the fourth quarter to revive the offense. At the 5:36 mark, Jimenez ran for a 13-yard touchdown to give Laredo Alexander a 17-7 lead.

Rodriguez tacked on the final points of the night on a 20-yard touchdown run with 2:11 left in the game.