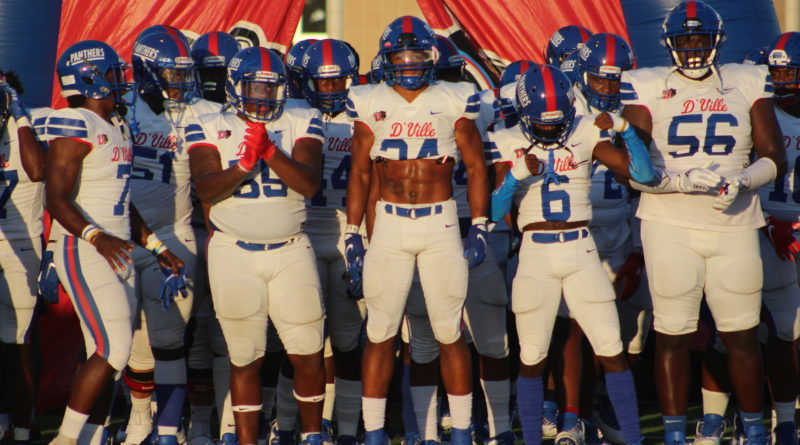 The 2021 Texas high school football season rolls into Week 5 after a pair of major upsets defined the fourth weekend of regular-season action and upended the SBLive Texas Top 50 rankings. Two new teams entered our statewide rankings, while a DFW powerhouse surged into the top five for the first time this season.

Below are SBLive’s Texas Top 50 rankings for the week of Sept. 20. The rankings are compiled by reporter Andrew McCulloch and will be released every week throughout the fall.

Longview and San Antonio Brandeis joined SBLive’s Texas Top 50 this week after solid wins this past weekend. Brandeis makes its season debut in SBLive’s Texas high school football rankings after the Broncos beat San Antonio Clark 45-35 to stay unbeaten and set up a clash with San Antonio Johnson for first place in District 28-6A this weekend. Longview returns to the Top 50 this week after the Lobos knocked off Bryant, ther three-time defending Arkansas state champions, 24-21 on Friday to win their third straight and snap the Hornets’ 32-game winning streak. Edinburg Vela and Garland each moved up one spot following dominant, lopsided victories in district play. Carthage — the reigning 4A DII state champions — had its second straight bye week during Week 4, but the Bulldogs are in for another major test this weekend against undefeated Gilmer, the reigning state champs in 4A DI. Katy Paetow jumped up three spots in this week’s rankings after the Panthers thrashed Fort Bend Kempner 65-0 to improve to 2-0 against district competition and pick up their fourth straight win by 20 points or more to start the season. Round Rock, meanwhile, dropped seven spots after the Dragons lost their season opener 21-13 to Round Rock Cedar Ridge.

Corpus Christi Veterans and Houston C.E. King moved into the top 40 after impressive Week 4 wins by each undefeated team. Corpus Christi Vets climbed up three spots by pummeling district rival Victoria East 63-22 in the Eagles’ third straight game with 50 points or more. King rose six spots in this week’s rankings by clobbering previously unbeaten Huntsville 49-6 in its non-district finale. Lucas Lovejoy also got a nice bump in the Top 50 for the third consecutive week, moving up five spots after the Leopards handed Denison its first loss of the season in a dominant 49-7 victory. Lovejoy has been outsourcing its opponents 233-49 through four games this fall. Converse Judson, however, slid for the third consecutive week as the Rockets dropped below .500 for the first time this year following a 24-21 home loss to New Braunfels in its district opener. Judson fell 11 spots in the rankings, while Midland Legacy also fell four spots after having to forfeit a Week 4 game against Arlington Bowie. Alvin Shadow Creek and Lewisville stayed put after bye weeks for both teams, while Fort Bend Ridge Point also held onto its spot after crushing winless Fort Bend Austin 64-0. Dickinson and Manvel each moved up one spot this week after impressive wins over Pasadena Dobie and Rosenberg Terry, respectively.

Highland Park became one of the biggest climbers in this week’s Top 50. The Scots moved up seven spots after an impressive 52-31 upset win against Rockwall that featured more than 400 total yards of offense for Highland Park. Austin Vandegirft joined Highland Park by moving inside of the top 30 this week. The Vipers . College Station, League City Clear Falls and Smithson Valley all held onto their spots after each team won decisively in Week 4. Cy Park jumped up two spots after the Tigers annihilated Cy Springs 62-7 in its District 16-6A opener last weekend with Oklahoma commit Harold Parkins racking up 159 total yards and three touchdowns on seven carries and one reception in the process. Cibolo Steele and Fort Bend Marshall each moved up one spot too after dominant district wins. Steele defeated San Antonio East Central 49-7, while Marshall beat winless Houston Northside 72-0. Cedar Hill, meanwhile, moved closer to surpassing District 11-6A rival DeSoto in the Top 50 this week. The Longhorns kicked off district play with a 38-20 win over Mansfield Lake Ridge, while the Eagles fell to Duncanville in a come-from-behind win for the Panthers.

Katy Tompkins moved back inside the top 20 after the Falcons clobbered League City Clear Creek 64-7 in their non-district finale. Arlington Martin, meanwhile, fell six spots after the Warriors dropped their last non-district contest of the season 31-7 to Southlake Carroll. Spring and Spring Westfield each moved up a spot following bye weeks before their district slates begin in Week 5. Aledo and Euless Trinity each climbed up one spot too following lopsided victories for the two DFW powers. Aledo downed district rival Burleson 56-14 to remain undefeated and the top-ranked 5A DII team in SBLive’s Texas Top 50 again this week. Trinity torched Fort Worth Boswell 55-20 in its district opener with Oklahoma State commit Ollie Gordon rushing for 155 yards and two TDs on 13 carries. San Antonio Brennan moved up a spot as well after downing San Antonio Warren 48-21 on Saturday to stay SBLive’s highest-ranked San Antonio area team for the third straight week. Allen and Lake Travis each slid one spot after the Eagles beat Tyler Legacy 49-28 in their non-district finale and the Cavaliers trounced San Marcos 45-6 in their District 26-6A opener.

Denton Guyer shot into the top five for the first time this season and Duncanville surged back into the top 10 to headline the major changes atop SBLive’s Texas Top 50 this week. Duncanville rallied from a two-touchdown deficit to beat rival DeSoto 42-21 on Friday, as the Panthers picked up their second straight win to start district play and leap up six spots in this week’s Top 50. Denton Guyer earned a hard-fought 46-35 win over Humble Atascocita in a matchup of two unbeaten teams. Guyer stayed undefeated and secured its second victory against a top-10 opponent this season after topping crosstown rival Denton Ryan in overtime during Week 2. The loss also dropped Atascocita five spots this week, but the Eagles remained in the top 10 behind the strength of a 3-0 start that featured a signature road win over Allen. Rockwall also tumbled out of the top five this week. The Yellowjackets fell five spots too after a 52-31 loss to Highland Park, their first of the season, but will have a primetime opportunity for a bounce-back game against crosstown rival Rockwall Heath. Denton Ryan moved up one spot after blasting Denton 55-28 with a marquee matchup at Frisco Wakeland on deck this Thursday. North Shore, meanwhile, jumped up three spots and back into the top five after the Mustangs took down Klein Oak 58-34. Katy and Southlake Carroll remained in their spots inside the top three after a pair of impressive wins against ranked opponents. Katy beat The Woodlands 21-14 thanks to a strong defensive performance for the Tigers’ second straight victory over a ranked opponent, while Carroll defeated Arlington Martin 31-7 for the Dragons’ fourth consecutive win against another ranked team. Austin Westlake and Cypress Bridgeland each stayed put too after both teams had byes in Week 4.