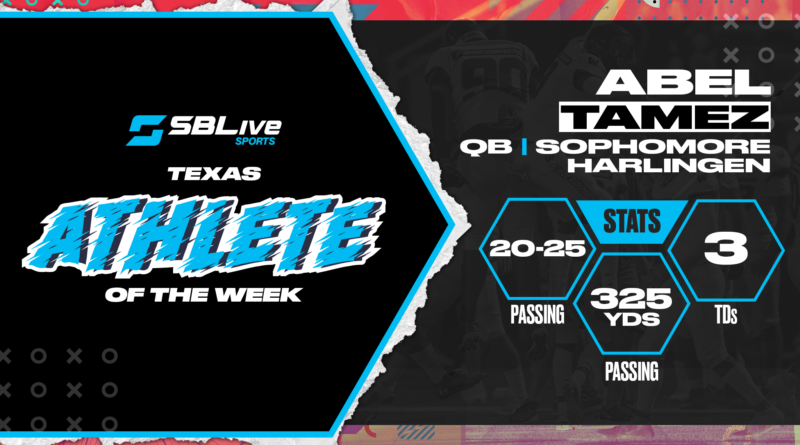 Congratulations to Harlingen quarterback Abel Tamez for being voted SBLive’s Texas High School Athlete of the Week for Sep. 6-12!

The sophomore received 46.07% of the vote, beating out Edinburg Vela RB Ted Galvan who finished second with 37.29%. Antonian Prep’s Olivia Arredondo finished third with 10% and Southlake Carroll’s Audrey Kubiak finished fourth with 2.4%. There were over 25,000 votes tallied this week!

Davenport threw for 367 yards and five touchdowns on 22-of-30 passing and added 109 rushing yards and two scores on 1o carries to lead Spring to a dominant 69-21 victory over Tomball Memorial on Thursday night. (Bishop Davenport featured photo above by Andrew McCulloch)

Cisneros threw for 196 yards and two TDs on 15-of-22 passing and ran for 114 yards and a rushing touchdown on seven carries in a 56-7 win against PSJA Memorial.

Klubnik tallied 352 yards and six touchdowns through the air on 21-of-30 and added a rushing score in Westlake’s 59-21 victory over Mansfield Summit.

Perkins ran four times for 95 yards with three TDs in a 59-20 win over Lamar Consolidated. He also snagged a 21-yard catch and recovered a fumble and ran it back to the house during a two-point conversion attempt defensively.

Whitehead rushed 12 times for 163 yards and two TDs and caught three passes for 42 yards and an additional touchdown in a 56-21 win over Plano.

Gordon carried the ball 28 times for 203 yards and touchdown in Euless Trinity’s 30-27 win over Colleyville Heritage.

Texada tallied 229 rushing yards on 16 carries in a 46-43 victory over Justin Northwest.

Sanford ran for 172 yards and two touchdowns on 14 carries in a 64-28 win against Round Rock McNeil.

Greathouse caught three passes for 100 yards and three TDs in a 59-21 win against Mansfield Summit.

Hale caught four passes for 140 yards and two touchdowns in a 46-20 win over Tyler Legacy.

Kelley recorded seven receptions for 121 yards and a touchdown in a 55-38 win against Weimar. He also scored a defensive touchdown on a 30-yard interception return.

Thomas tallied five catches for 88 yards and two TDs in a 45-3 victory over Fort Bend Elkins.

Maleski hauled in four passes for 116 yards and three TDs in a 39-35 victory over The Woodlands.

Omosigho caught five passes for 163 yards and a touchdown in Crandall’s 68-42 win against Alvarado.

Jaxson snagged 10 passes for 164 yards and three TDs in Lovejoy’s 69-21 victory over Princeton.

Steptoe caught nine passes for 233 yards and two touchdowns in a 41-14 victory against Frisco Lebanon Trail.

Hudson hauled in 10 receptions for 103 yards and three TDs in Garland’s 49-21 win over Plano Prestonwood.

Glover caught seven passes for 205 yards and three touchdowns in a 59-20 loss to Cy Park.

Platt had four catches for 121 yards and a touchdown in a 35-34 win over Carrollton Hebron.

Anderson recovered a fumble and found the end zone on a 99-yard touchdown return in a 27-21 loss against Spring Westfield.

Guilbeau scored by returning the game’s opening kickoff 96 yards for a touchdown in a 41-26 loss to Crosby.

Rivers scored on a 46-yard interception return for a touchdown in United’s 24-19 loss to Montgomery.

Hilliard returned a fumble 39 yards for a scoop-and-score TD in Monterey’s 23-21 victory over Midland.

Hampton returned two interceptions for touchdowns — one from 43 yards out and another 57-yard return — in Daingerfield’s 58-30 victory against Sabine. He also scored on a 60-yard touchdown run.

Nabors returned the opening kickoff 82 yards for a touchdown and added three catches for 57 yards and a receiving touchdown in Heath’s 62-21 victory over Red Oak.