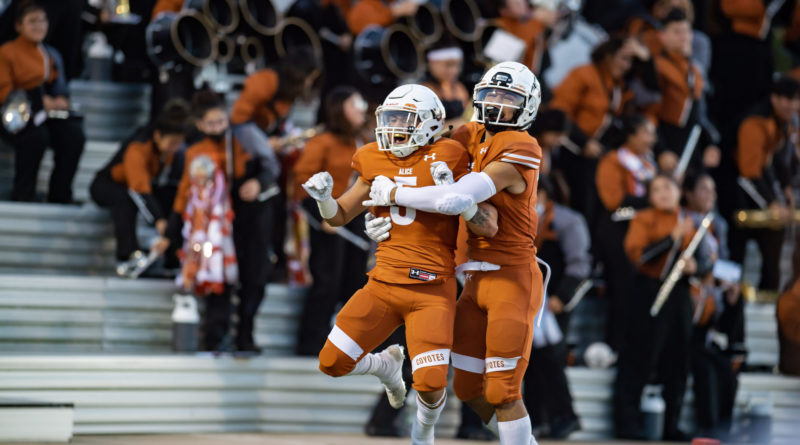 ALICE, Texas – On homecoming night in front of a boisterous home crowd the Alice Coyotes were able to pick up their first win of the season, racing past Hidalgo 48-14 on Friday.

Alice quarterback Matthew Ortiz led the charge on offense, completing 11-of-16 passes for 273 yards and accounted for five total touchdowns – four passing and one rushing. Alice running back Kaleb Aguilar chipped in with seven carries for 62 yards and two total touchdowns.

The Coyotes got off to a hot start after receiving the opening kickoff and eventually scoring on a touchdown run by Aguilar.

The Coyotes weren’t done, getting the ball right back on an onside kick that surprised Hidalgo. After recovering the kick, quarterback Matthew Ortiz connected with wide receiver Alejandro Vasquez on a long touchdown pass to give Alice an early 14-0 lead.

After forcing the Pirates into a punting situation, Alice blocked the punt and Noah Cervantes recovered it for a touchdown to give the Coyotes a 20-0 lead.

Hidalgo finally put together a drive with running back Enrique Hernandez breaking off a long run that put the ball at the Alice 10-yard line. Hidalgo quarterback Steven Martinez punched the ball across the line on a designed sneak to put the Pirates on the board, trailing 20-7.

On the ensuing possession the Coyotes continued to attack through the air with Ortiz finding Ryan Salas for a long gain. Alice capped off the drive with Ortiz calling his own number on a three-yard TD run to make it 26-7.

Salas then got in on the scoring with a 25-yard TD pass from Ortiz to take a 34-7 lead after a successful two-point conversion.

Ortiz would later air out the ball again on a 63-yard touchdown pass to Vasquez late in the second quarter, giving Alice a 41-7 halftime lead.

The Coyotes started the second half the way they ended the first with another touchdown pass from Ortiz to give him his fourth passing TD of the game, effectively putting the game to bed.

Hidalgo’s offense was led by running back Enrique Hernandez who carried the ball 23 times for 193 yards and one touchdown. Martinez went 3-of-6 passing for 28 yards and a rushing touchdown.

The Coyotes will hope to get a winning streak going next week when they travel to Kingsville to face off against the Brahmas, who fell to Orange Grove. Hidalgo will have a week to recap and refocus before they open district play against Grulla.