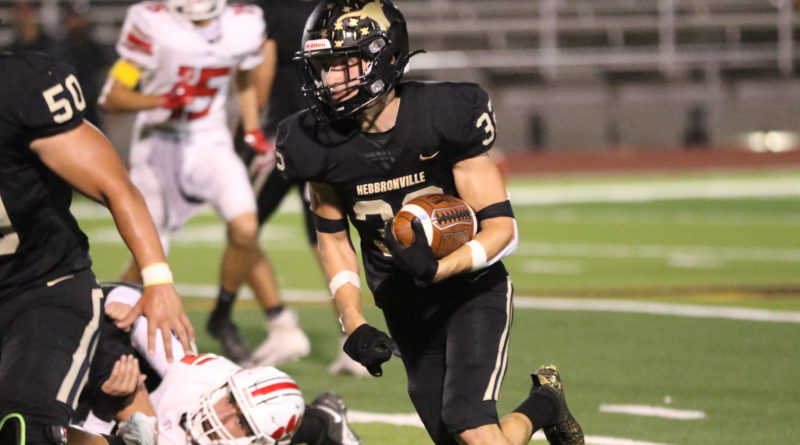 Senior running back Brandon Salazar also got in on the act, scoring two touchdowns for Hebbronville.

Almaraz put Hebbronville on the scoreboard first, breaking loose for a 38-yard touchdown run at the 9:22 mark of the first quarter.

The Bloodhounds did not take long to respond as senior quarterback Luigi Cristiano found sophomore Juan Pablo on a 57-yard touchdown pass. The 2-point conversion failed, though, and Hebbronville held on to 7-6 lead with 8:20 left in the opening quarter.

Brownsville St. Joseph caught Hebbronville off guard with an onside kick and was quickly back in business. But the Hebbronville defense stood its ground and Benny Cadena eventually came up with an interception.

The Bloodhounds eventually put together another drive late in the first quarter and took their first lead of the game on a 35-yard TD pass from Cristiano to Francisco de la Garza to make it 12-7.

Hebbronville responded with a 1-yard touchdown run by Almaraz to regain the lead at 14-12 with 11:22 left in the first half.

Salazar then tacked on his first touchdown of the game on a 43-yard run and Hebbronville quickly went up 21-12.

The Longhorns got the ball back and were looking to add to their lead, but quarterback Nate Garza was intercepted by Brownsville St. Joseph safety Adrian del Pozo, who returned it 90 yards for a touchdown. The Bloodhounds were able to punch in the 2-point conversion to take a 21-19 lead. That proved to be the last time the Bloodhounds would hold a lead.

While Alaniz was a force on offense, he also did his part on the defensive end and grabbed an interception as Cristiano attempted to deep pass in Longhorn territory with 6:02 left in the first half. Hebbronville eventually turned his pick into points as Perez scored on a 21-yard touchdown run to put the Longhorns ahead 27-19 with 3:33 remaining in the half.

Hebbronville’s defense forced a turnover on downs, and tacked on another touchdown with 29 seconds left in the half on a 24-yard TD run by Perez to take a 34-19 halftime lead.

The Longhorns continued to unleash their offense in the second half behind the legs of Salazar who was the workhorse on the ground. He broke loose for a 40-yard run and then capped it off with a 3-yard touchdown run as Hebbronville’s lead grew to 40-19. The extra point was blocked and scooped up by Brownsville St. Joseph’s Santiago Vidaurri who returned it for two points to make it 40-21.

The Bloodhounds scored on their next possession as Cristiano found Juan Pablo Vidaurri on a 50-yard touchdown pass to cut the lead to 40-27.

Hebbronville responded with Garza connecting with Alamaraz on a 12-yard touchdown pass to make it 47-27 and taking the air out of any potential comeback. The Longhorns added three more touchdowns to leave no doubt.

Hebbronville opens up district play next Friday as they hit the road to play Taft.