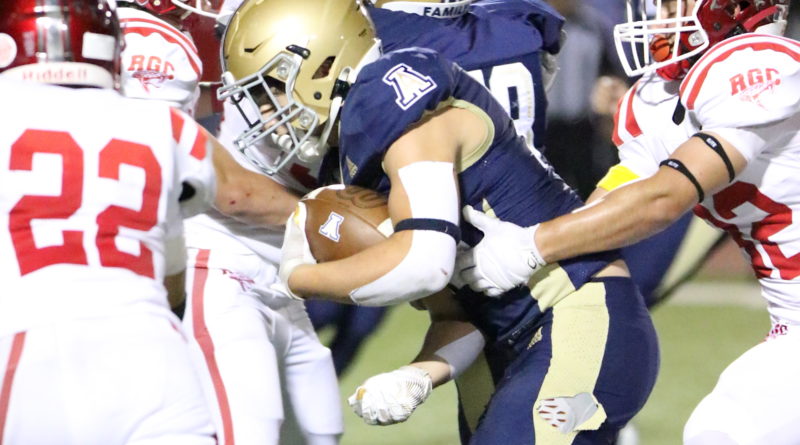 LAREDO, Texas – Heading into their matchup with Rio Grande City, Laredo Alexander had only scored 13 points in three games.

That all changed on Thursday night as the Bulldogs’ offense exploded for 57 points in a 57-0 romp over Rio Grande City at the Student Activity Complex.

Laredo Alexander’s offense dictated the pace of the game, led by sophomore quarterback Javier Jimenez, who scrambled for a 25-yard quarterback keeper to give Laredo Alexander a 7-0 lead early in the first quarter. Jimenez finished the game with three total touchdowns (two passing and one rushing).

The Bulldogs quickly added their second score of the game as sophomore running back Gael Rodriguez, last year’s District 30-6A Newcomer of the Year, unleashed Laredo Alexander’s running attack. After Jimenez connected with freshman wide receiver Ivan Pina to move the ball into the red zone, Rodriguez eventually found the end zone on a 3-yard touchdown run to make it 14-0.

On the next series Jimenez found Nathan Jasso for a 50-yard touchdown pass to increase Laredo Alexander’s lead to 21-0.

The Bulldogs poured it on as Jimenez hooked up with Pina on a 45-yard pass to put the ball on the 1-yard line. Rodriguez scored on a 1-yard touchdown run to make it 27-0, then Benjamin Puig connected with Josh Torres on the 2-point conversion to give the Bulldogs a commanding 29-0 lead with 5:11 left in the first half.

With less than one minute left in the half Laredo Alexander mounted another drive with Jimenez finding Pina for a 50-yard pass to put the ball on the 1-yard line. On first and goal Rodriguez powered his way up the middle for his third touchdown of the night, giving Laredo Alexander a 36-0 lead at halftime.

Laredo Alexander did not let up in the second half and found a new sense of energy as the defense kept hounding Rio Grande City quarterback Bryan Perez.

Rodriguez opened the third quarter with a 45-yard run, then Jimenez found wide receiver Josh Rodriguez for a 20-yard touchdown pass to increase Laredo Alexander’s lead to 43-0 with 10:29 left in the third quarter.

Laredo Alexander defensive back Devan Ethridge pounced on a fumble at the 10:27 mark of the third quarter, giving the ball right back to the Bulldogs. Three plays later running back Tristan Botello scored on 5-yard run to give Laredo Alexander a 50-0 lead.

On the ensuing kickoff, linebacker Jesus Guerra caused a fumble that was scooped up by Ethridge who ran it back for a 45-yard touchdown to give Laredo Alexander a 57-0 lead.

The majority of the starters did not play in the fourth quarter as the game was all but over.