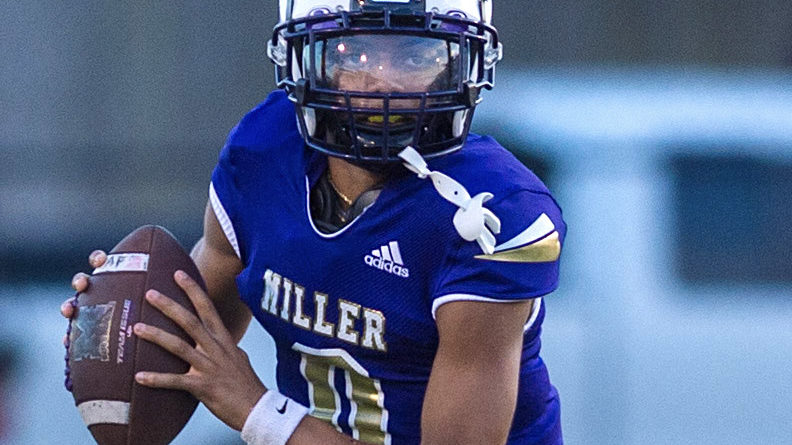 Brown, a sophomore, shredded the Eagles’ defense with big plays all night long. Six of his TD passes were at least 30 yards, and three were at least 60 yards. He finished 17-of-29 for 471 yards.

Lonnie Adkism was Brown’s main target, hauling in four receptions for 97 yards and a touchdown. Adkism also intercepted a pass on defense.

The Buccaneers’ run defense was just as impressive as they held Hanna running back Kriz Pena to just 40 yards on 26 carries. Pena had racked up 450 yards rushing in his last two games.

Miller led 21-14 at halftime thanks to a big defensive stop in the red zone just before halftime. On the first possession of the second half, Brown connected with Jayden Moreno on a 62-yard TD pass to give the Buccaneer’s a 28-14 lead. Miller turned into a rout from there.

Hanna did rack more than 300 yards of offense thanks to strong play from quarterback Joshua Vela and receivers Joshua Villafranco and Ethan Pena.

Miller finished with a remarkable 688 yards of offense, with running backs Ethan Greenwood and Mccullion Williams and receivers Adkism, Damare Lister and freshman standout Eathan Vela all contributing to the offensive outburst.

Miller (3-1) will look to stay hot with a big game coming up next Saturday against Waco La Vega at home in Corpus Christi. The Hanna Golden Eagles (1-2) will look to get back on track with their game against Harlingen South on Sept. 24.