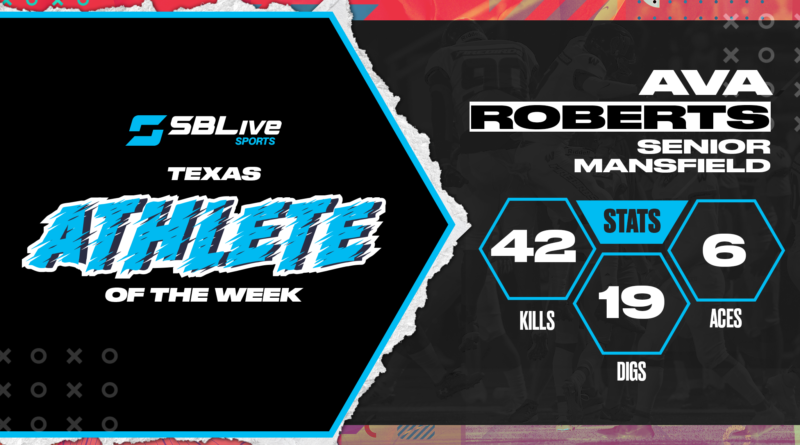 Roberts ran away with this week’s honor, receiving 63.33% of the total vote.

Ava Roberts, Mansfield volleyball: Roberts tallied 42 kills over two matches. She had 21 in a 3-2 loss to V.R. Eaton and 21 more in a 3-1 win over Timber Creek. She also had 19 digs and six aces over the two matches.

Rene Galvan, Sinton QB: Galvan rushed for three touchdowns and passed for two more to lead the Pirates to an impressive 50-12 road win over Carroll on Thursday night.

Kaden Anderson, Southlake Carroll QB: Anderson was 16-of-28 passing for 354 yards and two TDs and he added a rushing TD in Carroll’s 36-35 win over Rockwall-Heath.

Jose Guardado, Riverside RB: Guardado rushed 6 times for 220 yards with 2 TDs in a 54-7 win over Cathedral.

Kalen Barefield, Yorktown WR: Barefield caught 5 passes for 95 yards and 1 TD in a 49-17 win over Weimar.

Dylan Nelson, Coppell WR: Nelson rushed 4 times for 50 yards and caught 7 passes for 98 yards in a 41-55 loss to Prestonwood Christian.

Anthony Evans, Lake Travis WR/RB: Evans picked up a loose ball after being kicked around by players on both teams following a muffed punt and rumbled untouched down the sideline for a 70-yard punt return touchdown in Lake Travis’ 52-20 win over Converse Judson.