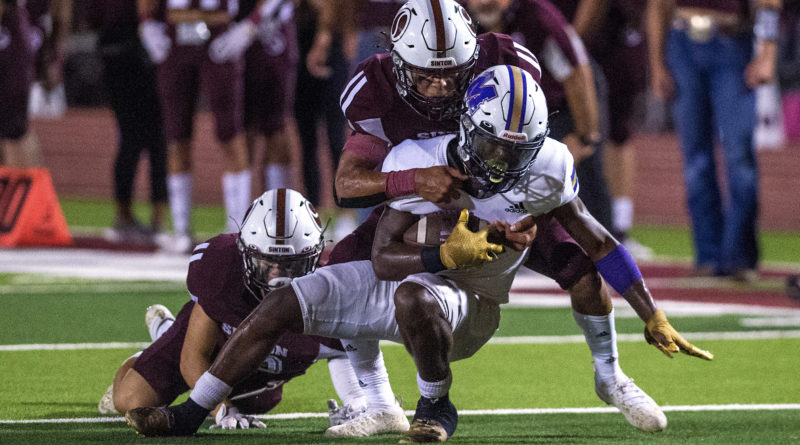 SINTON, Texas – With a textbook definition of back-and-forth football, Sinton and Miller did not disappoint as Miller pulled out a thrilling 34-30 win on Friday night.

Following a rough week with a big loss against local power Veterans Memorial, the Buccaneers were eager to get back on the field. Miller would strike early with sophomore quarterback Jaedyn Brown finding wide receiver Lonnie Adkism to open the scoring.

Miller moved the ball effectively against the Pirates but the Buccaneers were only able to muster one more touchdown in the first half. But Miller turned it on in the second half.

The Buccaneers scored 21 points after halftime with running backs Ethan Greenwood and McCullion Williams getting the majority of carries, as well as Brown. Wide receivers Donovan Terrell and Adkism stretched the defense and kept them on their toes.

Defensive back Jaedyn Moreno was the late game catalyst with an interception that bounced right to him and set up the touchdown that would put the game out of reach. Brown finished with 207 yards passing and five total touchdowns.

Sinton’s offense got off to a hot start with quarterback Rene Galvan leading from the front. The Pirates used a run-heavy attack to push down the field and score their first touchdown of the game on a 57-yard Galvan run.

Galvan would again call his own number with a 24-yard run to give Sinton a 12-7 lead. The Pirates scored one more time in the first half and held an 18-13 halftime lead.

Sinton scored once in the third quarter and scored again late with Braeden Brown scampering in after a long run and fumble that was picked up by Galvan. After closing the gap to 34-30, Sinton attempted an onside kick to no avail as it was picked up by the Buccaneers to end the game.

Galvan rushed for 175 yards and accounted for four touchdowns.

Sinton came into the game missing some key players due to injuries as well as some down to illnesses. Wide receiver JR Cruz was inactive Friday night as well as running back Rylan Galvan. Two players were lost during the game with knee injuries.

Due to the injuries the Pirates couldn’t rotate as efficiently as they normally would, with chunks of players going both ways throughout the game.

Special teams’ issues for both teams

The Pirates once again had trouble converting PATs with kicking being hit and miss. They also had trouble with the two-point conversion. Special teams’ penalties didn’t help with the Pirates backing up the Buccaneers within their own 20-yard line but a roughing the kicker penalty would give the Buccaneers a new lease on life and they would use it to march down the field.

While both teams looked strong from the start, they both had their issues with offensive movement, penalties and defensive stops. Sinton will look to rebound and hope they can bolster their crew with a bye week that is followed by the opening of district play with a road trip to Corpus Christi to take on the West Oso Bears.

Miller meanwhile will look to continue their success with their multitude of offensive weapons in their matchup against Brownsville Hanna and followed by their final non district game against the mighty Waco La Vega. The Buccaneers will hope their successes carry over from this matchup and can be the same explosive team as last year, opening district play against Alice on October 8.