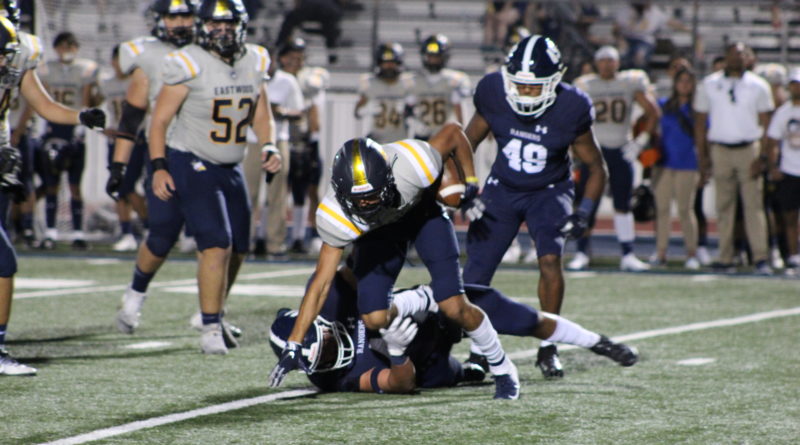 On a broken play late in the first quarter, Scheppler zeroed in on a Troopers’ quarterback scramble before swiping and recovering a fumble in enemy territory. On the next play, junior wide receiver rumbled into the end zone on a 33-yard run to put Smithson Valley up 14-0.

Scheppler’s takeaway marked the first of three turnovers forced by the Rangers defense, which spurred Smithson Valley to a quick start and a wire-to-wire 42-14 victory over Eastwood on Friday night at Ranger Stadium in Spring Branch.

“We talked in the pregame about persistence, I think we had persistence,” Smithson Valley junior center Colton Thomasson said. “We came at them, they came at us. They’re a great team and it went back and forth, but we ended up having more explosive plays than they did and we didn’t take our foot off the gas.”

“They’re a big, physical football team. We knew what they were going to do, but I just thought our tackling was not very good tonight. It was a little better in the second half, but if you’re going to correct stuff, you correct it in a non-district loss,” El Paso Eastwood head coach Julio Lopez said.

The Rangers, the 34th-ranked team in SBLive’s Texas Top 50 rankings, dominated defensively by forcing turnovers and disrupting plays at the line of scrimmage.

All of Smithson Valley’s three takeaways on defense either directly led to points or kept points off the board for Eastwood.

In addition to Scheppler’s forced fumble and recovery, senior cornerback Garrison Eggleston snagged a pair of interceptions for the Rangers defensively.

Eggleston’s first takeaway set Smithson Valley up offensively to score its fourth touchdown of the game during the second quarter, while his second pick during the fourth quarter quashed a promising Eastwood drive to seal the victory.

The Rangers also recovered a failed onside kick attempt by the Troopers which led to a three-play scoring drive and a decisive field position advantage in their favor.

“I’ve said it once and I’ll say it a million times: (defensive coordinator) Craig Wersterfer can make a good defense out of a 7th grade B team. He’s an amazing football coach and he does everything he can to get people in positions to make big plays, and that’s what (our defense) did tonight. Garrison Eggleston had two interceptions and we had some big plays on defense that helped us out a lot.”

Smithson Valley’s dominance in the trenches carried over to the offensive side of the ball too.

Thomasson, a Texas A&M commit who towered above most Eastwood defenders at 6-foot-7, and the Rangers offensive line got consistent push off the line of scrimmage to jumpstart the team’s offense.

Smithson Valley scored five of its six touchdowns on the ground against the Troopers with the offensive line setting the table for a hungry group of backs.

Clarke and sophomore Doug Lantz each scored a rushing touchdown, while senior running back Travis McCracken found the end zone twice — once on a one-yard run midway through the first quarter and again on a five-yard carry to end the opening drive of the third quarter.

Junior quarterback Chase Senelick scored the Rangers’ first touchdown on a 10-yard run midway through the first quarter and threw a 47-yard bomb to senior tight end Cole Douglass for the team’s final touchdown with a minute left in the third quarter.

“I think we are really good at run blocking on this offensive line,” Thomasson said. “I think we’re all headhunters, and we like to run downhill and run downhill hard.”

“They were as advertised with their offensive line,” Lopez said. “They were big, they were physical and they moved us off the ball and line of scrimmage by 2 or 3 yards of play there in the first half.”

El Paso Eastwood, which traveled 537 miles to face Smithson Valley, was able to push the ball downfield with some regularity. However, the Troopers were bit by the injury bug and the trio of costly turnovers which gave the team an uphill climb early.

Seniors Samuel Lopez and Chris Pena were both ruled out due to injuries before the game, which deprived Eastwood of a pair of explosive offensive weapons.

Their absences and Smithson Valley’s stellar defensive performance upfront made the Troopers’ offense mostly one-dimensional and unable to consistently establish its rushing attack.

“We’ve got to get some guys healthy. We were missing Sammy (Lopez) and some other key pieces here and there. That hurt,” Lopez said. “I think offensively what we were disappointed about is we felt like we could match them score for score, but we missed a couple of throws that set us behind. Then we started pressing, made some mistakes and turned it over. You just can’t do that against a good football team.”

Quarterback Andrew Martinez played well behind center for the Troopers despite a handful of turnovers.

Martinez prolonged several Eastwood drives with his quick thinking and ability to improvise on broken plays. The senior was able to pick up several critical first downs with his feet and proved to be slippery in the open field when the pocket collapsed.

Martinez also showed his big arm and ability to connect with his top receivers on the move. He frequently connected with wide receivers on throws far beyond the first-down marker and mostly avoided costly sacks.

His chemistry and timing with senior wideout Aaron Rodriguez and junior receivers Michael Caldera and Curtis Murillo kept the Troopers offense moving, but Eastwood was ultimately unable to catch up after the Rangers’ fast start.

“I love them. They’re one of the most explosive groups I’ve been around. … I just can’t say enough about Andy. We love the kid and he’s been a leader for us and he’s as dynamic as it gets,” Lopez said.

“We felt like we needed to win a little bit of a shootout and get them out of their comfort zone. Then it would have been a different story. The minute we fell behind and Smithson Valley held the lead, that hill we had to climb just got bigger and bigger because that’s what they feed off.”

“They’re from a different time zone, so I think it’s a crazy contrast to see and I’m super glad we got to play them,” Thomasson said. “I feel kind of bad that they had to drive eight hours, but it was a great football game. We helped each other get better — iron sharpens iron — and they’re going to win their district probably. They’re a very talented team and they have a great offense.”

Smithson Valley (3-0) finished its non-district slate unbeaten with the victory and will face San Antonio Wagner (3-0) to kick off district play in 27-6A at 7 p.m. Friday at Ranger Stadium in Spring Branch.

El Paso Eastwood (2-1) enters a bye week and will return to action for its first District 1-6A contest at 7 p.m. Thursday, Sept. 23 at SAC Stadium in El Paso.