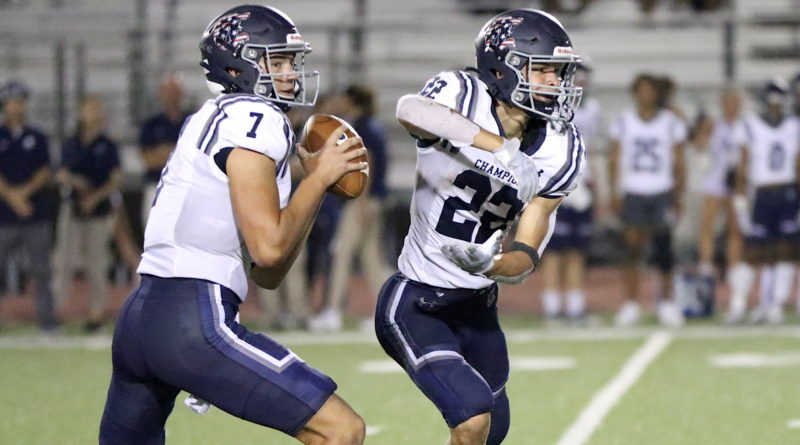 LAREDO, Texas – Boerne Champion quarterback Karson Kaiser threw two touchdown passes to Davis Pike – including a 40-yard strike on the opening possession of the game – to lift the Chargers to a 24-12 win over Laredo United South in non-district action Friday night.

Boerne Champion set the tone early as they mixed the run and the pass on their opening drive to set up what appeared to be the first TD of the game. Kaiser connected on a 35-yard pass to Pike in the end zone, but it was called back on an offensive pass interference penalty. On the next play Kaiser went right back to his favorite target, hitting Pike on a 40-yard TD pass to put the Chargers up 7-0 with 8:48 left in the first quarter.

The Laredo United South TNT defense was tested often and had a hard time stopping Boerne Champion running back Cole Riha. The sophomore exploded for a 40-yard run late in the first quarter to put the ball on the 4-yard line. Riha followed with a 4-yard touchdown run to give the Chargers a 14-0 lead with 6:21 left in the second quarter.

The Panthers failed to move the ball, though, and were forced to punt it right back. Boerne champion pounced on the short field, needing just three plays to score again, this time on a 4-yard TD pass from Kaiser to Pike to give the Chargers a 21-0 lead.

Laredo United South got the ball back with just over two minutes left in the half and quickly mounted its best drive of the game. The drive culminated with sophomore quarterback Luis Cisneros hitting senior wide receiver Javier Rodriguez on a 10-yard TD pass to finally put the Panthers on the board with 10 seconds left in the first half. The extra point was blocked, giving Boerne Champion a 21-6 edge at halftime.

The Panthers and their TNT defense that dominated the district last year turned up the defensive intensity in the second half, holding Boerne Champion to just three points on a field goal by Will Wallace with 4:20 left in the third quarter.

The Panthers’ offense made an attempt to get back in the game, with Cisneros connecting on his longest pass of the game on a 45-yard strike to senior wide receiver Armando Garza with 7:17 left in the fourth quarter. Junior running back Brandon Benavides eventually scored on a 2-yard TD run to cut the lead to 24-12 with 3:39 remaining. But the 2-point conversion failed and the Panthers ultimately ran out of time.