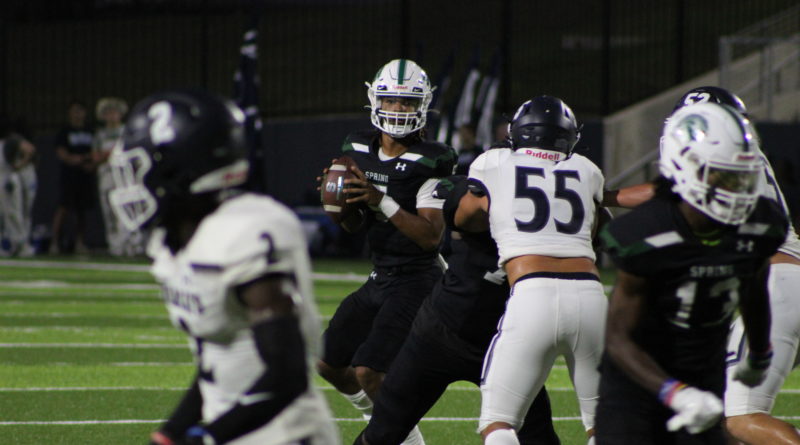 Spring’s senior quarterback led his team’s offense downfield and across the goal line in 86 seconds on the game’s opening drive.

Davenport punctuated the Lions’ first possession by splitting a pair of safeties with a bullet throw to senior wide receiver Travis Sims Jr. for a 25-yard touchdown pass.

That quick score sparked an explosive start for Spring’s offense and marked the beginning of a monster night for Davenport, who scored seven touchdowns to lead the Lions to a 69-21 win over Tomball Memorial in an all-around dominant team performance at Planet Ford Stadium.

“I felt good about this game and coming in here with that motor. … I knew I was in the zone on the first drive,” he said. “This was the most fun I’ve had playing football in a while. It was fun putting up all those points and scoring those touchdowns.”

Davenport and the Lions’ offense scored on each of their first three drives of the game, quickly putting Tomball Memorial in a double-digit hole by the end of the first quarter. Running back Myron Carter punched in the first of his two touchdowns on a one-yard run and then Davenport piled on with a 22-yard touchdown pass to Bralen Martin.

Davenport, a Utah State commit, remained in the game through the end of the third quarter with his final snap of the night ending with a 13-yard touchdown run to put his squad up 62-7 on the Wildcats.

“It’s just about that conditioning at practice. It’s about being focused and going full speed at practice,” Davenport said. “Everything is about practice so we can bring out here Friday, or Thursday, night and tonight we showed up.”

Davenport and the Lions’ deep group of athletic running backs and receivers helped their team sprint ahead thanks to their exceptional efficiency in the early going.

Spring’s senior quarterback dissected Tomball Memorial’s pass defense with near pinpoint precision and frequently turned broken plays into positive yardage with his elusiveness on the ground.

The Lions’ skill position players were able to consistently find space and make big plays in the open field to keep momentum firmly on their side.

“It’s like I’m handing the ball off to them — we have that kind of connection,” Davenport said. “We’re just working hard every day at practice keeping our chemistry up and hanging around each other.”

The Lions flustered and frustrated Tomball Memorial’s run-first offense by disrupting plays at the line of scrimmage.

Defensive end Gerrod Henderson could not be contained by the Wildcats’ offensive line. Spring’s senior pass rusher tallied multiple sacks and made several big hits defending against the run.

The Lions were also successful in forcing several turnovers and capitalizing on all of them.

The Lions also forced and recovered two fumbles on kickoffs after scoring on the previous possession, which gave Davenport and the offense quality field position on most of their drives.

“All 11, that whole defense balled out. Our practices feel like a football game because they bring it,” Davenport said. “They bring it at practice and game days and the way they connect, it’s crazy. All 11 of them want the ball on every play.”

The Wildcats, however, struggled to establish their rushing attack for stretches and were unable to keep up with the Lions on the scoreboard.

Spring (3-0) remains unbeaten with the victory and has now outscored its opponents by 118 points through its first three games.

The Lions will enjoy a bye week before they return to action to start District 14-6A play against Spring Dekaney (0-2) at 7 p.m. Friday, Sept. 24 at Planet Ford Stadium in Spring.

Tomball Memorial (1-2), meanwhile, will look to reverse its recent losing skid in their next game against Kingwood (0-2) at 7 p.m. Friday, Sept. 17 at Turner Stadium in Humble.